Ceremony of possession of the former Xique-Xique farm, located in Lavras da Mangabeira, was held this Tuesday (March 29) 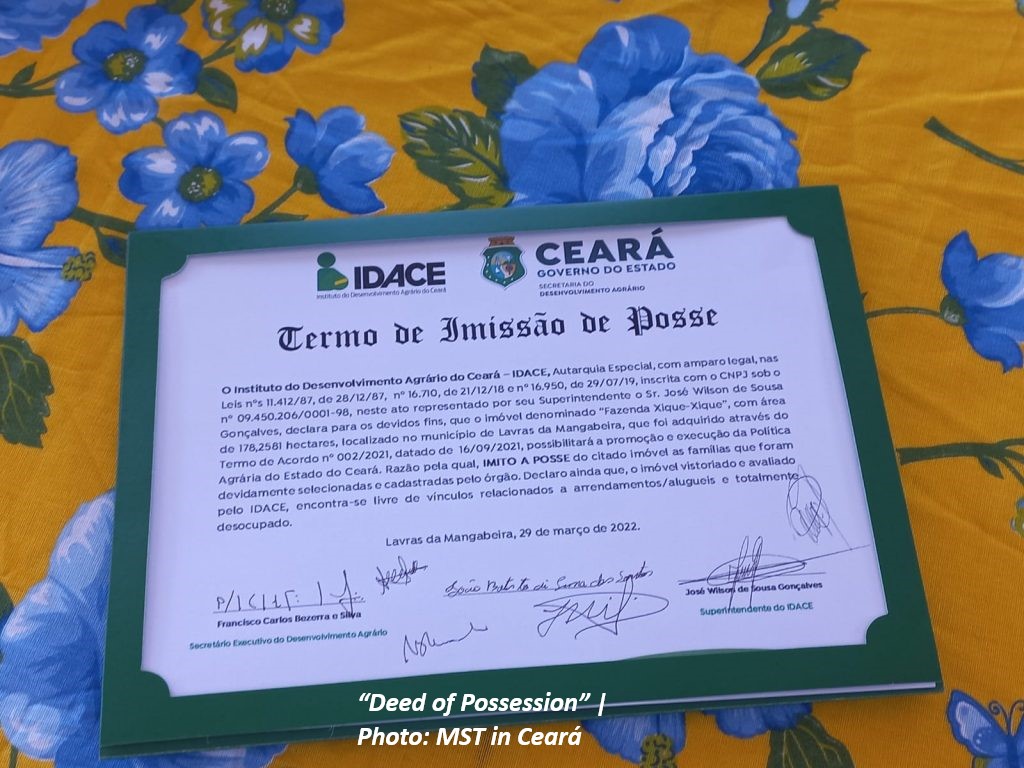 Yesterday morning (March 29), the Landless Rural Workers Movement (MST) conquered yet another Agrarian Reform settlement area, with the possession of the former Xique-Xique farm, located in the municipality of Lavras da Mangabeira, 414 kilometers away from Fortaleza, which will settle 15 Landless families.

The act of taking possession of the land was attended by the Secretary of Agrarian Development, Zé Wilson, Father Machado de Independência, Rivanio Leandro, representative of the municipal professional school, representative of Ematerce (Technical Assistance and Rural Extension Company of Ceará), representative of the Rural Workers Union of Lavras da Mangabeira, as well as MST leaders and militants and the settled families. The event started around 10 am and ended at 12 pm with a collective lunch. 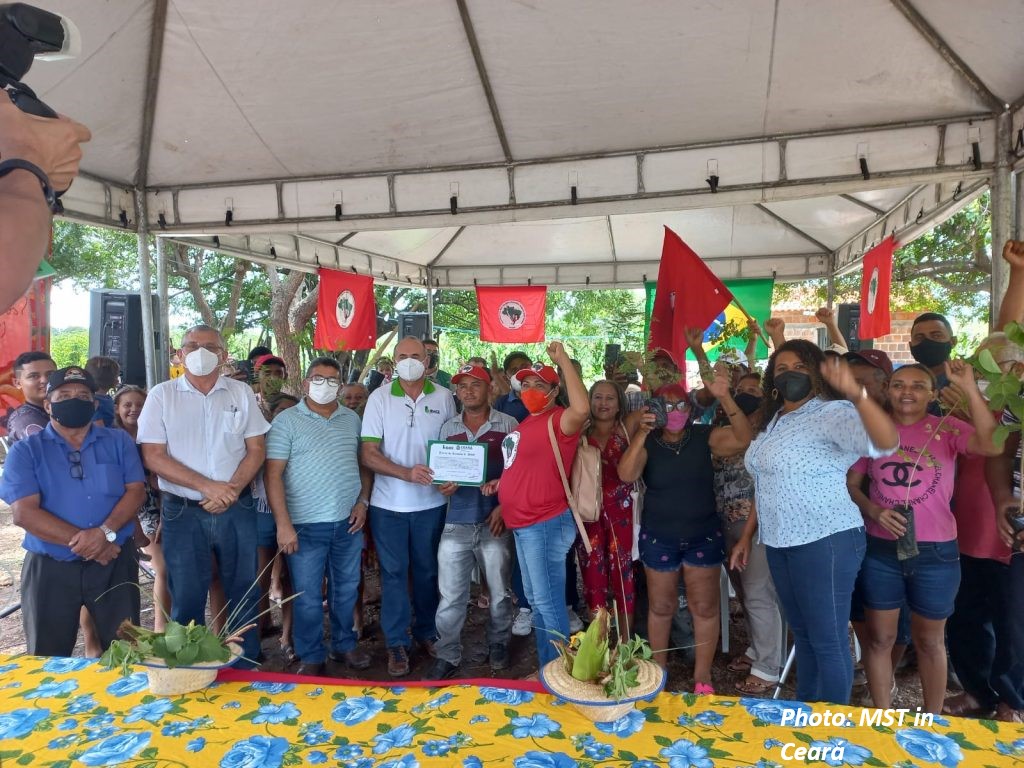 The occupation of that territory took place on April 11, 2018, on the São Domingos farm, on April 8, 2019. A year after the occupation, the families were evicted, and since then they have resisted in an area of ​​150 hectares that belongs to State School of Professional Education Professor Gustavo Augusto Lima, in that municipality.

“Our life is our land, that's why this moment is so important today, conquering the land is conquering the possibility of living with dignity, raising our children, working and producing food for us and for those who need it” says Antônio Torres, settled in the new Zé Wilson settlement.

Zé Wilson Gonçalves, Superintendent of the Agrarian Development Institute (IDACE), highlighted the importance of the action. “This moment is very special for you, who dreamed of acquiring a piece of land and went in search of it. I am very happy to be in this government and to be able to make our contribution towards meeting the demands. While the federal government goes against the grain, destroying everything that has been built, our government creates a mechanism to resolve conflicts and still gives families the right to access land and produce what is most essential in people's lives, food.” 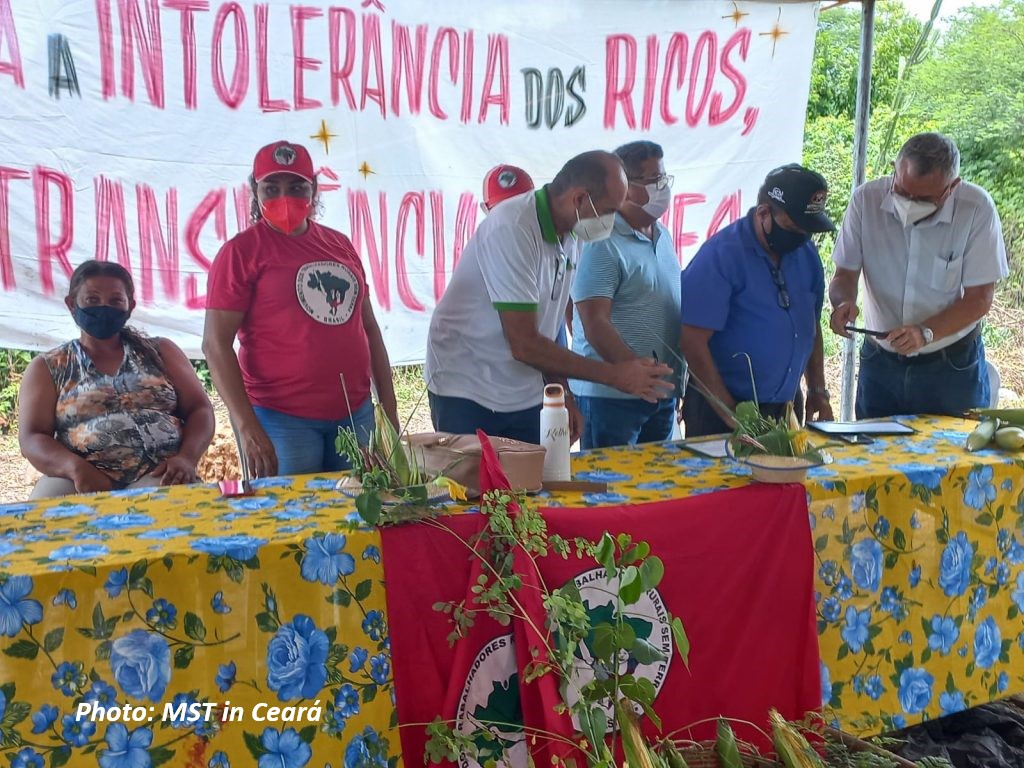 Josimeire Lemos highlighted the importance of conquering the first settlement resulting from the struggle of the MST in the municipality of Lavras “it is with great joy that we receive possession of the land, it will be destined for families who were encamped and had been suffering from several attacks by this genocidal government, these families already went through an eviction process, but they continued to resist, and this achievement represents a big step for our organization, for us as a Landless movement, it is time to celebrate our strength, our resistance, we can say that it is a historic milestone in the construction of the Popular Agrarian Reform, as this is the first settlement resulting from our struggle in the municipality of Lavras da Mangabeira”.

The settlement will be named Zé Wilson, in honor of an MST leader who contributed for many years in the Cariri region. The settlement of families takes place through LAW 17,533, of June 22, 2021, land regularization, entitled Wilson Brandão Law, which enables the Government of the State of Ceará, through the Agrarian Development Institute (IDACE), to acquire land for the purpose of Agrarian Reform.

The context of the struggle for Land in Ceará 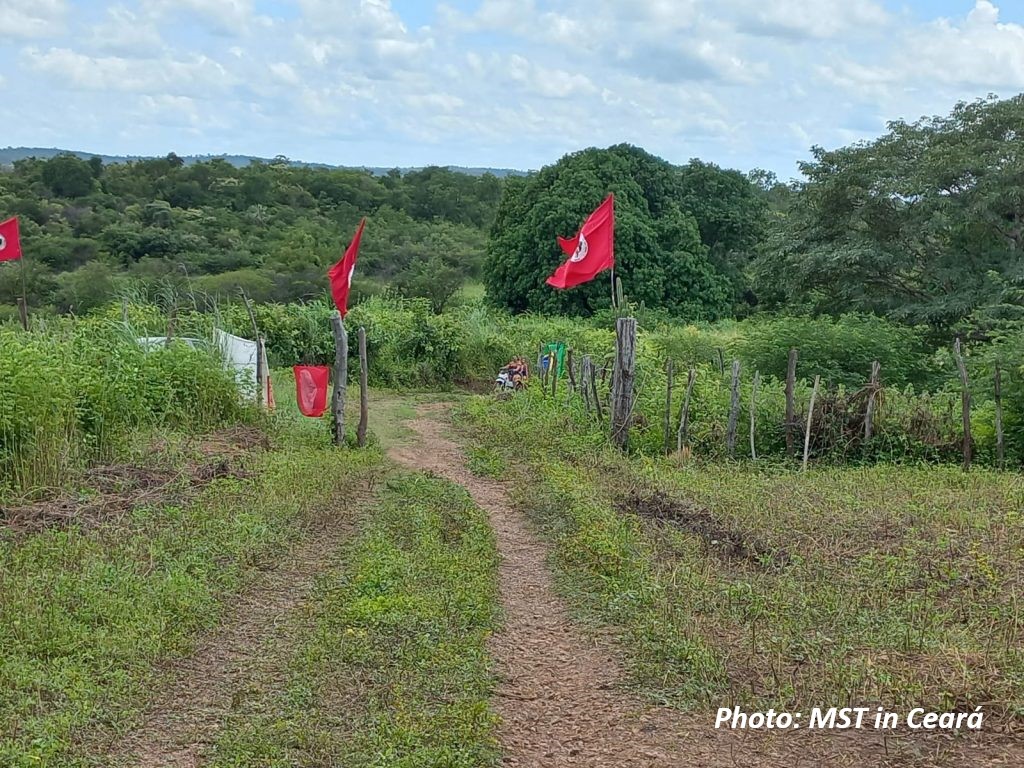 The MST arrived in Ceará in 1989, with its first occupation on the Reunidas de São Joaquim farm, located in the municipalities of Quixeramobim, Madalena and Boa Viagem, in the Sertão Central of Ceará. At the beginning, it had the support of the Pastoral Land Commission (CPT), the Rural Workers Union of Quixeramobim, the Central Única dos Trabalhadores (CUT). In the same year, the first occupation resulted in the conquest of the land, today, the 25 de Maio Settlement.

Since 1989, several struggles have been faced and many conquests have come, and today there are more than 200 federal and state settlements, about a thousand families camped in rural and urban areas and a large occupation of land in Chapada do Apodi in Limoeiro do Norte, known as Zé Maria do Tomé camp, where it used to be used only for agribusiness.

Currently in Brazil there are more than 162 thousand families camped, according to data from the Zero Eviction Campaign, which with the end of ADPF 828, which extends evictions and removals during the pandemic, which is scheduled to end next March 31. [Brazilian Supreme Federal Court (STF) extended the eviction moratorium through June 2022.]

ADPF protected more than 14,600 families during the pandemic, as a result of complaints filed with the Federal Supreme Court (STF), the campaign also identified 106 cases of suspension of evictions, totaling 22,868 families that were not thrown out on the street, without any condition.

“With the end of ADPF 828, thousands of families run the risk of being thrown into the worst of the barbarities that this model of capital offers to workers, but the situation can get even worse with no extension of the moratorium that threatens 132 thousand families who are on the verge of eviction, in this context the zero eviction campaign aims to eradicate any denial of the right to life from being made impossible, we make our camps a place for the construction of life, we fight for zero eviction because land is a common good, land must be democratized, we live in the midst of a pandemic, property cannot be above the guarantee of life” says Fabio Pereira, state director of MST Ceará.