The MST believes that education of rural communities - in rural communities -must insure that rural workers, men and women alike, take ownership of their history.  They thus become agents of change, with consciousness needed to transform reality and the conditions surrounding them.  One of the MST's most important mottos is: "All Landless, Men and Women, Must Study."

Education and training plays a fundamental role in allowing the settlers and encamped families living in the Agrarian Reform areas to join forces and organize to transform their own conditions and make it possible for many others to have access to land and a more dignified life. This can only be achieved through dedication and concrete means. These trainings happen at regional schools as well as the newly completed Florestan Fernandes National School (see below) outside Sao Paulo.

Training activities are contributing to the following aspects: a) Awareness-raising about the Brazilian reality; b) Developing a resistance campaign to ensure our permanence in the countryside; and c) Articulation with other small farmers’ entities against agricultural policies.  These activities include:

The MST has achieved:

• Establishment of approximately 2,000 public schools in encampments throughout Brazil;

• More than 200,000 landless children and adolescents attending school, and about 95% of them participating in a special curriculum

• Creation of the Youth and Adult Education, a literacy project designed for the landless, with content specific to the rural reality.  Since its inception, in 1993, the program has educated more than 50,000 rural workers through various methods, including the Cuban program "Yes, I Can!;"

• Training of more than 3,900 educators at secondary and higher levels.

• Establishment of partnerships with more than 13 public universities for bachelor's and master's degree course in education, history and agronomy, among others;

• Establishment of more than 250 pre-school centers with children from 0 to 6 years old.  These educational centers function alongside cooperatives and production associations in settlements, encampments and training courses;

The Escola Nacional Florestan Fernandes (ENFF) was born out of a desire to think, plan, organize and develop political and ideological training for MST's activists and leaders, as well as for the working class.  A school that is many schools, ENFF is a physical space beyond geographical limits, facilitating the development and implementation of educational programs throughout Brazil.

The Escola Nacional Florestan Fernandes opened in 2005 and functioned since 1999 carrying out and coordinating formal and informal courses in training centers in several states. The school campus construction began in 2000 using soil cement (adobe construction) and today, a beautiful campus in Guararema (SP) was built through Voluntary Work Brigades from settlements and encampments throughout the country, In 2005, Oscar Niemayer, an internationally renowned Brazilian architect and recipient of the 2004 MST "Land Struggle Award" agreed to design the Auditorium Building that is now part of the complex. Since the campus' inauguration in January 2005, more than 10,000 social movement activists have participated in programs and activities carried out by the school 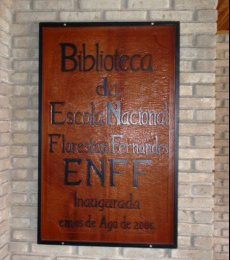