One of the principles of MST is the transformation of society, seeking to build a united society, with social justice, capable of guaranteeing a 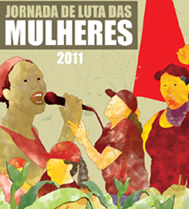 dignified life to all of the population. To achieve this, the MST understands the need to end inequality in gender relations. The MST believes that in order to grow as new women and men new economic, social, political and environmental relationships must be based on values such as respect, friendship, solidarity, justice and love.

Obviously there are gender inequalities within the MST; after all, the movement is not an island within society. The most important task of the Gender Sector is to discuss and to contest gender relations within MST while strengthening the role women play in the organization.  The MST believes that gender and class are intertwined, and the movement has set a clear direction to describe and expand landless women's participation.

Among others, the MST considers it essential that:

-Access to land: joint land-use titles titles and right to credit in the name of couples;

-50% participation by women in all MST education and training course, and in leadership roles inside the organization's national bodies;

-Guarantee one male and one female coordinator in the community bases;

-Intensive discussion and study regarding the theme of gender in all courses and conventions held by the MST;

-Participation of women in the entire production process;

-Guarantee childcare at courses, events, meetings in national, state, regional and local instances; permanent child care in the camps and settlements so children are not impediments of women’s participation in activities of education and in daily work;

-Organizing the national campaign: "No Rural Woman Worker Without Legal Documents," to encourage women in the countryside to get the basic documents that protect their rights;

-Assure that projects of investment, definitions of lines of production, and finally, economic decisions are taken only with family participation.

Without these programs, values such as exploitation, discrimination, violence, authoritarianism and individualism, pillars of the society we are trying to destroy, will exist will have in our homes, communities of camps and settlements and in the body of the organization. The new woman and the new man are within us. But it is necessary to awaken them and let them bloom, to construct together a new way of society.