During the Fourth National Meeting of the MST in 1987, this flag became the symbol of the MST and is present in encampments and settlements, during marches and mobilizations, in commemorations and celebrations and in the houses of those who are passionate about the Movement. 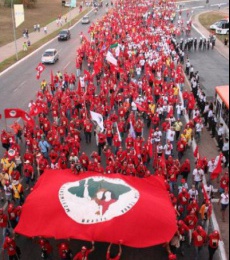 The colors and design of the flag are significant:

The map of Brazil represents the MST as a national organization and that the struggle for agrarian reform should involve the entire country.

The man and the woman worker represent the need to engage men, women and entire families in the struggle.

The machete represents the tools of work, struggle, and resistance of the Brazilian landless. [The word is facão. While "knife" in Portuguese is faca, the Brazilian facão is a very large knife similar to a cutlass.--Trans.]

The color white represents the peace for which we fight, which can only be won when there is social justice for all.

The color red represents the blood that flows in our veins and our will to fight for agrarian reform and the transformation of society.

The color black represents our homage to all those workers who have already fallen in the struggle for a new society.

The color green represents the hope for victory for every unproductive large land holding we will win.