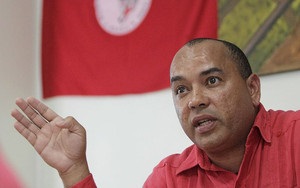 South America’s largest country, Brazil, has been rocked in recent months by a political crisis in part fuelled by a mass protest movement calling for the dismissal of centre-left president Dilma Rousseff. The protests come as the country officially moves into recession, with Brazil’s economy expected to contract this year by 2%.

Brazil has been governed by a Workers’ Party (PT)-led coalition for over a decade, firstly under Luiz Ignacio “Lula” da Silva and now Dilma, as she is commonly referred to. As one of a number of leftist parties to have been elected to government in South America since 2000, the PT has been particularly important to the process of regional integration due to Brazil’s large economy and strategic role in the region.

Many believe the PT – which emerged out of the anti-dictatorship and trade union struggles of the 1970s – is facing its biggest crisis yet, and there are strong signs that the party is shifting to the right.

In response, sections of the left, such as the Landless Rural Workers Movement (MST) – the largest social movement in Latin America – are reorganising and preparing themselves for the fight ahead.

Green Left Weekly’s Federico Fuentes interviewed Alexandre Conceição, a national leader of the MST, to get his views on the current political situation in Brazil and the left’s response.

Dilma Rousseff was re-elected as president one year ago. Yet recent polls have shown her support dipping below 10% and there have been large mobilisations calling for her impeachment. How do you explain this situation?

Neoliberal forces have launched an offensive in an attempt to impose their economic program across the globe. Through this they hope to solve the problems that the crisis of capitalism has created for them.

In Brazil, international financial capital is pressuring the government to implement a program that was defeated at the ballot box in October 2014. That is why they are pushing for more austerity, in particular cuts to social spending, the removal of workers’ rights, the handing over of our natural resources such as oil and minerals, and the privatisation of public companies.

At the same time, conservative sectors are using the crisis to weaken the government, even raising the spectre of a military coup. They have organised mass demonstrations and worked to undermine the government in Congress.

In response, the government has caved to this pressure and is becoming weaker as each day goes by.

The pressure to implement austerity and the calls to impeach president Dilma are two sides of the same coin. By implementing austerity, the government is breaking away from its base and becoming weaker in the face of any potential coup.

As the coup-plotters advance, the government becomes more frightened and deepens austerity.

Why has the Dilma government decided to take the path of austerity? Can it be said that the government is shifting to the right?

The government has shifted to the right.

The governments of Lula and Dilma were characterised by their neo-developmentalist agenda which was based on economic growth, public investment as a means of state intervention in the economy, increased profit margins for capitalists, minimum wage increases for workers and social policies to benefit the poor.

Now, the government is implementing a regressive economic program based on high interest rates and cuts to spending, which has led to falling investment, the removal of workers’ rights, a reduction in social spending on the poor and a downsizing of the role of the state. The finance minister is implementing a neoliberal policy.

What does the reappearance of Lula as a possible PT presidential candidate for 2018 represent?

Lula continues to maintain a large level of popular support and will always be remembered for what his government represented.

However a lot can happen between now and 2018.

We know that the reactionary right never accepted the fact that a migrant from the country’s north-east [the poorest region in the country] became president. They will do whatever they can to ensure that Lula does not win again.

The Dilma government is also not helping the situation given its low approval rating.

Faced with this situation, how is the relationship between the left and the government, and what has been the left’s response, in particular the MST?

The Brazilian left is divided into three camps.

One camp is made up of those who blindly defend the government and accept austerity measures as necessary for guaranteeing stability. This position is mistaken because the government is going down the wrong path and austerity will not help it get out of this crisis.

Another camp is made up by those who see the struggle against the government as the main priority, and in some cases have even flirted with those proposing a coup. They ignore the actions of the right and the consequences for popular forces and left if the Dilma government was to be deposed.

A third camp, which the MST is part of and has catalysed the aspirations of most popular forces, argues that it is necessary to simultaneously fight against the coup plotters and for a shift in the government’s economic program. Together with many other movements, parties and sectors of society we recently formed the Popular Brazil Front.

What can you tell us about the Popular Brazil Front?

The Popular Brazil Front brings together popular, democratic and nationalist sectors in order to fight back.

In early September, we brought together 1500 activists from all across the country in Belo Horizonte and launched the Front on the basis of fight to defend democracy and for a change in economic policy. We do not accept austerity which shifts the burden of the crisis onto workers, and we do not accept coups by those cannot accept the fact that they were defeated in the ballot box.

We believe this crisis will not be resolved in the short term and we need to prepare and reorganise ourselves behind a strategic perspective. Our perspective has to be to carry out important structural reforms. That is why we are working across the country to build the Front, advancing a programmatic debate and uniting struggles that can help place the historic project of the working class at the heart of the country’s political debate.

We already have an important schedule of events to help organise the Front in the different states and an important schedule of mobilisations, beginning with ones on October 2 and 3 in defence of [the state oil company] Petobras, of our sovereignty, and for using wealth from the pre-salt oil deposits to fund increases in education spending. We oppose attempts by the right-wing Brazilian Social Democratic Party (PSDB) to use their power in the Senate to block the pre-salt oil deposits law that would channel oil wealth towards education spending, and instead hand the deposits over to US transnationals to exploit out energy resources.