Canaã dos Carajás, where Vale operates, has more cases than many large cities, though with only 36,000 residents 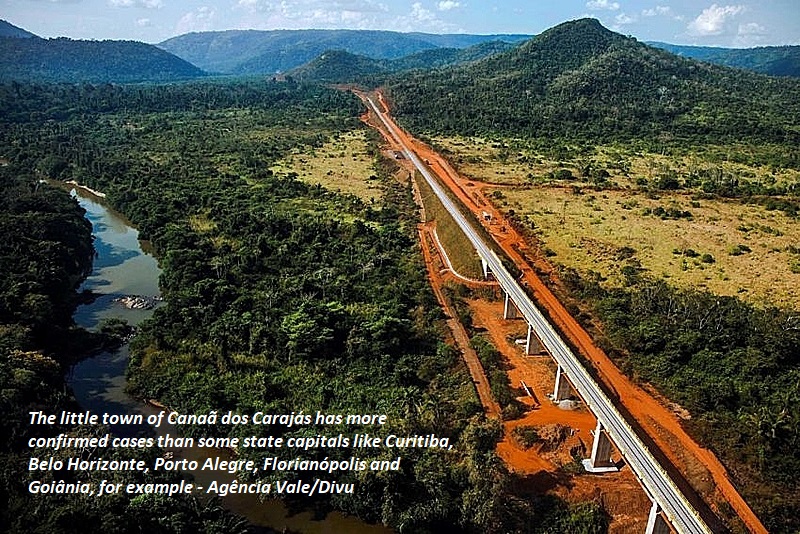 Cities which house large mining projects in Brazil are also hot spots for the novel coronavirus. In them, we see high levels of contagion, little infrastructure and an evident lack of concern for employees.

Backed by the Federal government, companies are maintaining high levels of production and profits. With nowhere to turn, front line workers have no recourse unless they become infected and their lives are at risk.

Only in this scenario was 36 year old machine operator, Evaldo de Almeida Fidelis, able to stay home. He contracted the virus in a mine run by the Vale company, located in Parauapebas, in the state of Pará. He was away for 42 days in order to recover.

“There is no way you can justify not going to work, unless you get infected, contaminated. Besides this, what are you going to say? You have to work, you feel obligated to provide this service, more so since the Federal government has declared mining to be an essential activity,” he recounts.

The worker ended up infecting his entire family – wife, son and mother. In three days he lost 10% of his lung capacity and according to him, was afraid he wouldn’t make it. “I actually thought I wasn’t going to pull through.”

After recovering, along with his whole family, Evaldo was forced to go back to work, again putting himself at risk for the sake of something that president Jair Bolsonaro considers essential.

“What is essential is putting food on people’s table, healthcare, security. How is it that the government deems this huge company with tons cash as essential? How can workers defend themselves? We have no legal recourse to protect ourselves with,” complains the worker.

Paraupebas is a municipality in the southeast of the state of Pará. Since the 1980’s their main economic activity is mining. This is the heart of the Carajás Valley, where the world’s biggest iron deposit is locate, controlled by the Vale mining corporation, which also extracts gold and manganese in the region.

According to a study done by the Health Ministry, and obtained exclusively by Brasil de Fato, up till June 10th, the city was ranked 19th in the country for covid-19 cases. Local authorities say 99 people have died there from the disease.

In Canaã dos Carajás, another mining region ran by Vale, the situation is even more alarming: there have been 1.417 confirmed cases up till June 10th, affecting a population of 36.027 inhabitants – therefore, almost 4% of residents are infected with the coronavirus.

This means that this little town has more registered cases than some state capitals like Curitiba, Belo Horizonte, Porto Alegre, Florianópolis and Goiânia, for example.

Rafael Avila, president of the Base Metals Inconfidentes Union, in Minas Gerais, it is impossible to stick to World Health Organization guidelines while engaging in mining activities.

“Even with the protocols that companies like Vale are implementing, this doesn’t address the covid-19 problem. On the contrary. This shows that in reality, it is impossible to control the virus while engaging in mining activities,” he states.

Other mining towns and municipalities in the region are on high alert due to covid-19.

Luiz Paulo Siqueira, from the national directorate of the Movement for the Peoples’ Mining Sovereignty, reminds us that in order to extract minerals, gatherings are inevitable.

“The way mining works, promotes large gatherings between workers. They gather at bus stops, use the same buses, share booths operating machinery. Thus, an infected person may work a shift in a booth operating a machine. The worker that comes in for the next shift, will without a doubt be at high risk of contracting the virus”, he affirms.

Siqueira argues that these companies should suspend work at the mines immediately, on the condition that salaries are maintained. “It means stopping activities, with the guarantee that workers get paid their full salaries and benefits, the same goes for contractors,” he suggests.