Friday, March 5, 2021
Brazilian Politics Society and Economy
Info Source:
By Jaime Amorim | Edited by Vanessa Gonzaga | Translated by the Friends of the MST (US) | https://www.brasildefatope.com.br/2021/03/05/chegamos-ao-limite-da-irresponsabilidade-aceitavel

Today I am not going to write an article, I am going to make an appeal as a leader of the MST and a member of the international coordination of Via Campesina. Looking at Brazil, we have to be clear, sincere and objective: we are reaching approximately two thousand daily deaths and almost three hundred thousand deaths in total. We are living what we might never have imagined living in our history, in the middle of the 21st century. We are experiencing a war against the virus, but with a disorganized state, a murderous government and an unbelieving society. 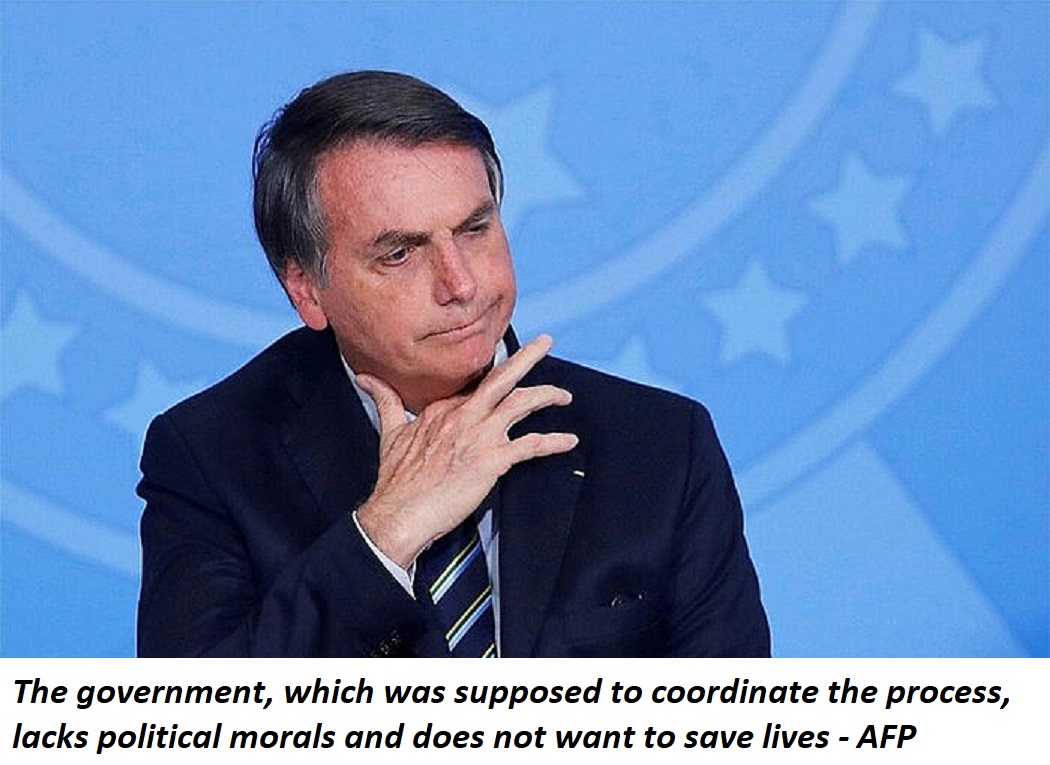 We are seeing the pandemic advancing, people dying but the government that should coordinate the process has no political morals and does not want to save lives. To favor the market, it reached the height of irresponsibility by denying social restrictions as an alternative to prevent the spread of contagion, denying personal care and the use of masks as an alternative for individual protection and denying the vaccine, which is the main thing needed to combat covid-19, immunizing the population and interrupting the circulation of the virus.

The Federal Government, with an irresponsible and denialist stance, disrupted the Unified Health System just at a time when Brazil and the Brazilian people needed it most. They cut health care funding, leading to chaos and collapse in the health system at a time when the pandemic has stepped up its attacks, infecting the population and killing more people. The health system has collapsed and Brazil is on the verge of a general collapse.

Today, we are seeing several expressions of solidarity with the families of the victims of the pandemic and of this government failure, from senators and deputies and even from the president of the Supreme Federal Court. What angers us is that at this moment the easiest and most comfortable thing is to show solidarity to the victims' families. Right now, solidarity is important, but what we need least is a ceremony at the Federal Court as a show of solidarity with almost 300 thousand deaths in Brazil, not even from senators and deputies. We need them to take a stand.

We need the STF to fulfill its function of ensuring the democratic rule of law, fulfill its obligation to act on behalf of the Brazilian people to prevent the Bolsonaro government and its deputies from governing the country. They should be removing the government for lack of coordination, organization, incapacity, for denying objective reality and disrupting those governors, mayors and members of society who are trying, with many sacrifices, to seek alternatives in order to save lives. Proposing restrictive measures, lockdown, curfew, encouraging social distance, solidarity actions, distribution of masks and food as an alternative to at least mitigate the progress of the pandemic. While the president and his class mock the population, disorganize the process, cut off Emergency Aid and now suggest lowered aid; while the population is living with a health crisis and a social crisis with an increase in unemployment, hunger, misery, and violence.

Therefore, gentlemen of the STF, now use your power on behalf of the Brazilian people so that we can reorganize the state, the government, and society and save lives. Gentlemen presidents of the Senate and the Chamber of Deputies, it is not enough to make speeches of solidarity. It is time to be energetic, to take a stand, to take actions to save lives. We need to immediately remove that government and reorganize a transitional government until new elections are held immediately to elect a new government. We need to immediately create a crisis committee, formed by the three spheres of the State: Judiciary, the new Executive Transitional Power, Legislative Power, governors and representatives of civil society such as scientists and health professionals who can immediately guarantee vaccine for the entire Brazilian population with a nationally coordinated campaign, with guidelines so that people can respect restrictive measures, social distance, personal care and mandatory use of masks.

At the national level, a process of suspending all non-essential activities and suspending classes throughout the national territory is required in a planned and coordinated way. Guarantee funds for hiring all the health professionals needed for the emergency period so that they can immediately join the campaign and save lives against the pandemic. It is also necessary to restructure the entire system with Brazilian doctors or to invite foreigners to immediately resume the Mais Médicos (More Doctors) Program.

The transitional government should immediately guarantee, without bureaucracy, an emergency aid of a minimum wage so that all families can join the campaign for social distancing and restrictive measures.

For farmers to continue their food production activities and avoid an announced food crisis, it is urgent to immediately approve the emergency plan for family farming, guaranteeing an emergency resource for everyone, credit so that families can go back to producing healthy food. We need to create a plan immediately to end this process, motivated by a murderous government, of deforestation and burning that has led to the destruction of our environmental reserves and has encouraged large landowners to invade reserve lands, indigenous lands and Amazonian lands.

The transitional government should reorganize the Brazilian economy, which may, after the pandemic, recover the economy's capacity to guarantee work and income for the entire Brazilian population.

Bolsonaro Must Go, Vaccinations Now for Everyone and Urgent Emergency Aid!

For Brazil, for the Brazilian people.