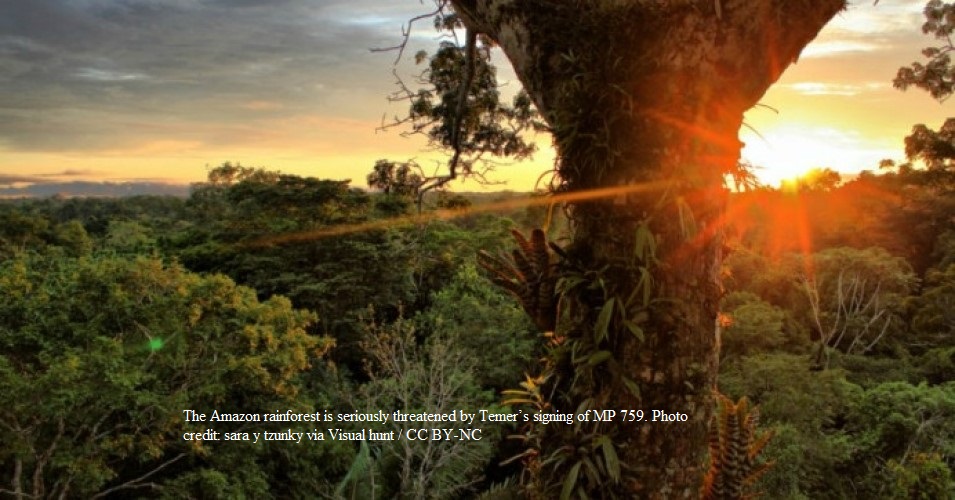 BRASILIA, Brazil: On 11 July, President Michel Temer signed into law important new legislation (MP 759) that paves the way for land thieves, who have illegally occupied and cleared vast areas of public land in the Amazon, to legalize their land holdings. The changes introduced by the legislation will make it easier — and very cheap — for wealthy land grabbers (even those who illegally occupied land fairly recently) to gain property rights over vast areas.

The bill was passed at a time of drastic cuts in funding for key government regulatory bodies, such as the environmental agency IBAMA, the agrarian reform institute INCRA, and the Indian agency FUNAI.

The new law which is likely to embolden land thieves, when combined with the huge enforcement cuts, could lead Brazil into a period of lawlessness and unrest believes Deborah Duprat, Prosecutor for Citizen Rights in the Office of the Attorney General (PFDC).

“Among numerous unconstitutional elements, MP 759, which was approved in the midst of protests, transfers into private hands an enormous stock of public land,” said Duprat. “With this, various policies that guarantee land for peoples, the environment and conservation units, are going to become completely compromised. We have to be prepare for a situation in the countryside where — as a result of the bankruptcy of public policies — violence will grow exponentially,” Duprat said.

Remote parts of the Amazon are especially expected to be impacted. Experts fear that the passage of MP 759 will greatly accelerate deforestation.

The new legislation came in the form of a provisional measure, MP 759/2016, which was proposed by the administration, approved by Congress, and then signed by Temer. Despite its expected major impacts, the law has attracted little attention in the mainstream media, largely because of the current political tumult in Brasilia, which is dominating the news.

President Temer signed the measure on the same day that Judge Sergio Moro sentenced former president Lula to nearly ten years imprisonment for corruption, on the basis of what many see as flimsy evidence. The Lula conviction announcement, while taking attention away from MP 759, also muted trade union movement protests over a massive erosion of labor rights that was being approved by the Senate. All of this also helped delay voting by a Congressional Commission on the serious corruption accusations Temer is facing. 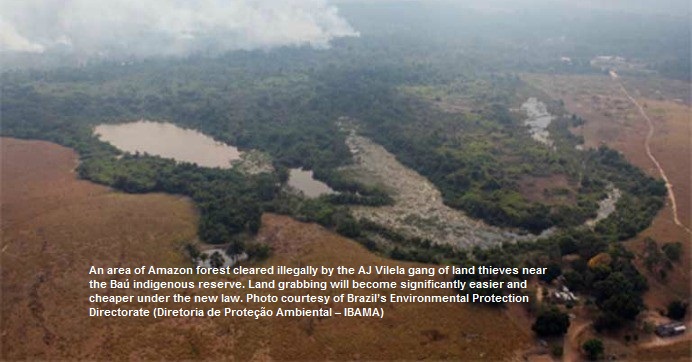 MP 759 alters Terra Legal, a program announced as a means of enabling peasant families to gain ownership of their small land plots, even though legislation for this purpose already existed. Introduced in 2009 under President Lula, Terra Legal has, in fact, largely strengthened big farmers: although peasant farmers make up 85 percent of the program’s beneficiaries, they have only gained 19 percent of the land. The rest has gone mostly to the wealthy elite.

The significant changes to Terra Legal, some introduced at a late stage by the bill’s rapporteur, Senator Romero Jucá, will further facilitate land theft. The law includes an increase in the maximum size of individual land occupations that can be regularized from 1,500 to 2,500 hectares (5.8 to 9.6 square miles). This change will make it easier for land grabbers to gain control over larger areas of land, particularly given the common practice by which laranjas (literally oranges, or stooges) who register land in their name but actually hand it over to the land thieves.

There are also fears the new law will negatively impact Brazil’s agrarian reform settlements, many of which were set up due to pressure from Brazil’s globally known landless movement (MST).

Gerson Teixeira, an agrarian expert, said that the new law will remove a stipulation that allowed peasant families to delay paying for their plots until the land is supported by adequate infrastructure. “Most of the settlements are in a precarious condition,” Teixeira said. “They don’t have rural credit or infrastructure. Some have existed for 20 years and don’t have a single well.”

If peasant families must start paying for their plots immediately, many will have no option but to sell, because without rural credit and adequate roads, they can’t farm profitably, Teixeira added, “Big landowners want to get their hands on the 80 million hectares [308,882 square miles] given over to agrarian reform. Making settlers start paying for their plots will give agribusiness what it wants — land for sale.Ariovaldo Umbelino de Oliveira, from the University of Sao Paulo, believes that current policies, including Terra Legal, will boost the morale of land thieves, encouraging them to form some of the largest rural estates recorded in the history of humanity.

The government insists that the main objective of the new legislation is to sort out Brazil’s chaotic land situation. “Our goal is to simplify inefficient procedures and to cut the red tape,” said Eliseu Padilha, the Presidential Chief of Staff. “With the new program the government will turn millions of Brazilians into citizens.”

Senator Romero Jucá said that the government was paying its “historic debt” to the thousands of families who had migrated to the Amazon in the 1970s and 1980s and never received the land titles they had been promised.

However, according to Brenda Brito, who has a doctorate in law from Stanford University and now works with the Brazilian NGO Institute of Man and the Environment in Amazonia (Imazon), Jucá’s argument is weak, because the new legislation is not needed to provide families with these titles. 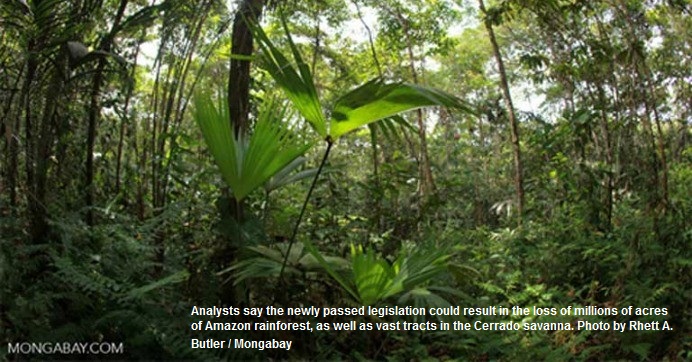 According to Brito, the government’s real motives can be found in two changes introduced by the new law. The first is to bring forward the cut-off date after which land cannot be registered, from December 2004 to December 2011. “Those who invaded public land after the approval of law 11,952 did it knowing it was illegal to do this, and thus carried out the crime of invasion of public land, set out in article 20 of law 4,947/1966. In extending the date to 2011, the MP is, in practice, providing an amnesty for this crime.”

The second change is to consolidate the system by which the government provides a generous subsidy for the land sale. According to Brito, Brazil’s General Accounting Office (Tribunal de Contas da União) had already reported that the charges made by the Terra Legal Program were “derisory” and infringed the law. But, she says, the new law continues with the old system: “just to give an example, a hectare of land in the district of Paragominas in the state of Pará, would have a market cost of up to R$10,000 (US $3,120). But, by the rules of the [new] MP, the government will charge only R$45 (US $14).”

Brito concludes: “During a period of economic crisis and increasing deforestation … this MP is doing the opposite of what is needed, by allowing derisory prices to be paid, and stretching out the time periods. The Castanheira and Flying Rivers Operations, carried out by the Federal Police, showed that there is a scramble [by land thieves] to illegally take over public land in Amazonia. For this reason, instead of giving an amnesty and becoming an accessory in this criminal behavior by providing a presidential sanction, the government should have vetoed the MP and sent out the message that this kind of theft of public property will not be tolerated.”

The new law also weakens environmental regulations. The final version, signed by Temer, abolishes the earlier stipulation that claimants would lose their title to the land if they cleared the area of forest, called a legal reserve, which they are bound by law to leave untouched. All that is now necessary to deforest is that the claimants register their land with the Rural Environmental Inventory (CAR).

MP 759 is just the latest in a series of retrogressive measures that are being pushed rapidly through Congress by the bancada ruralista rural caucus that are undoing the environmental and social advances made by Brazil since the return to civilian rule in 1985. Civil society is protesting vociferously but has been unable to influence the Congress.