They denounce the idle land use, separation of small milk producers in the region and the influence of the former owners to acquire the area. 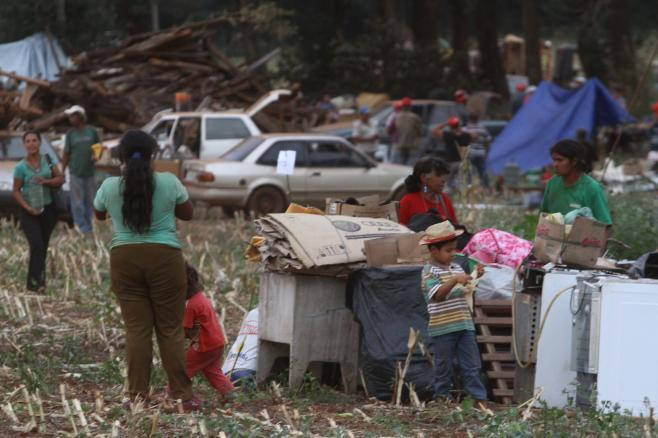 The area of ​​approximately 3,700 hectares, was donated by Alexander Von Pritzelwitz in 1995 for the Luiz de Queiroz Agrarian Studies Foundation (FEALQ).

The students argue that "only 350 of the 3,700 hectares of the farm are dedicated to research in beef cattle area, which reveals idle land use and separation of small milk producers in the region. The movement also complained that the previous owners of the property would never set foot in the area before acquiring land titles for contacts and political advantages from the Paraná state elites in the Londrina region. "

Check out the manifesto in full:

For freedom of expression, against the repression of the student movement, total support for the occupation of Fazenda Figueira by the MST!

Last August 24, the Levante Popular da Juventude in ENEBio and academic centers of USP were in favor the occupation of Fazenda Figueira by the MST [2] in Paiquerê-PR, an area belonging to FEALQ, a private foundation connected to ESALQ-USP [Luiz de Queiroz College of Agriculture  University of São Paulo].

Only 350 of the 3,700 hectares of the farm are dedicated to research in beef cattle area, which reveals idle land use and separation of small milk producers in the region. The movement also complained that the previous owners of the property would never have set foot in the area before acquiring land titles for contacts and political advantages from the Paraná state elites in the Londrina region.

Data still unpublished from the Atlas of the Land -  Brazil in 2015, made by CNPq/USP [National Council for Scientific and Technological Development], show that 175.9 million hectares are unproductive in Brazil, since the concentration of land during the last term Dilma grew by 2.5%. The 130,000 large rural properties concentrated 47.23% of the entire area registered by Incra [National Institute for Colonization and Agrarian Reform][3]. Meanwhile, 3.75 million small landholdings (minimum ownership of land) occupy less than one-fifth of the area of ​​estates: 10.2% of the total land registered. Of the 200,000 landless families in the country, 9,000 families are camped in Paraná waiting for settlements.

The large estates of land add to the knowledge of production for export. Behind the "esalqueano pride," remains a country where only 19% of youths aged 18 to 24 have access to higher education (PNADs data/IBGE 2009).

ESALQ, despite the institutional policy that prioritizes funding research increasingly in the service of agribusiness and transnational industries, still resists science committed to the public interest. Teachers and students have been conducting research and extension work to prove the viability of Agroecology as a source of Food Sovereignty and Security and Nutrition for the people, free of poisons, creating jobs, environmental preservation and sustainability and national sovereignty.

Our views received support and respectful disagreements. However, we call attention to the amount of expressions of hatred and prejudice by some individuals little interested in discussing facts and arguing from concrete data. In the social networks and those dependent on ESALQ, offenses sometimes become threats and an incitement to violence.

We understand that such attacks do not involve a militant, but the militancy as a whole, limiting the Freedom of Expression guaranteed by law. Rather than keep quiet in the face of threats, we will take the necessary legal action.

We know that the repression of any organized movement is at the service of an individualistic society. We know that silence operates in favor of the stronger side. So we want our solidarity with the landless and with all the bodies of the student movement, including those who have been attacked without taking a position.

We reaffirm our commitment to People’s Agrarian Reform with the Agroecology, with the rights of Indigenous Peoples, with the Student Entities, with the struggle for democratization of Education and the People’s University, for a world without racism, sexism and homophobia.

To Struggle Is Not a Crime!
Youth Who Dare to Struggle to Build People's Power!
Free the Homeland, We Will Win!

The USP Foundation, has a 3,700 hectare farm in the municipality of Londrina about 500 km from their agronomy and veterinary college (located in Piracicaba-SP). There the foundation conducts research for beef cattle, Nelore [a breed of cattle]. The MST occupied the farm, understanding that area would have a better social function for families and horticultural produce, within a municipality with a population of over 1,300,000 people. What do they do with the research of livestock? On the other hand , we defend the continuation of research, but suggest that  INCRA pay for the farm and with these resources USP could purchase an area in Piracicaba, nearest faculty, students and researchers. And even if one wants to specialize in beef cattle, USP could buy a farm in Mato Grosso do Sul, which is a high-priority area for livestock, whereas it is not a priority in Paraná, much less Londrina.

Incra is already negotiating with USP.

However, the struggle within the college reproduced the class struggle in the streets of recent months. And a right-wing sector started to attack the students and all those who support the proposal of the MST.

Therefore, young people who support the MST are being persecuted within the college, by those who always want only the thinking of old Goebels and of the new neoliberalism.

We ask for your solidarity with the students of ESALQ / USP, send your message to:

And send your message of support for the MST Paraná: