The Struggle for Despejo Zero: how we arrived at the extension of ADPF 828 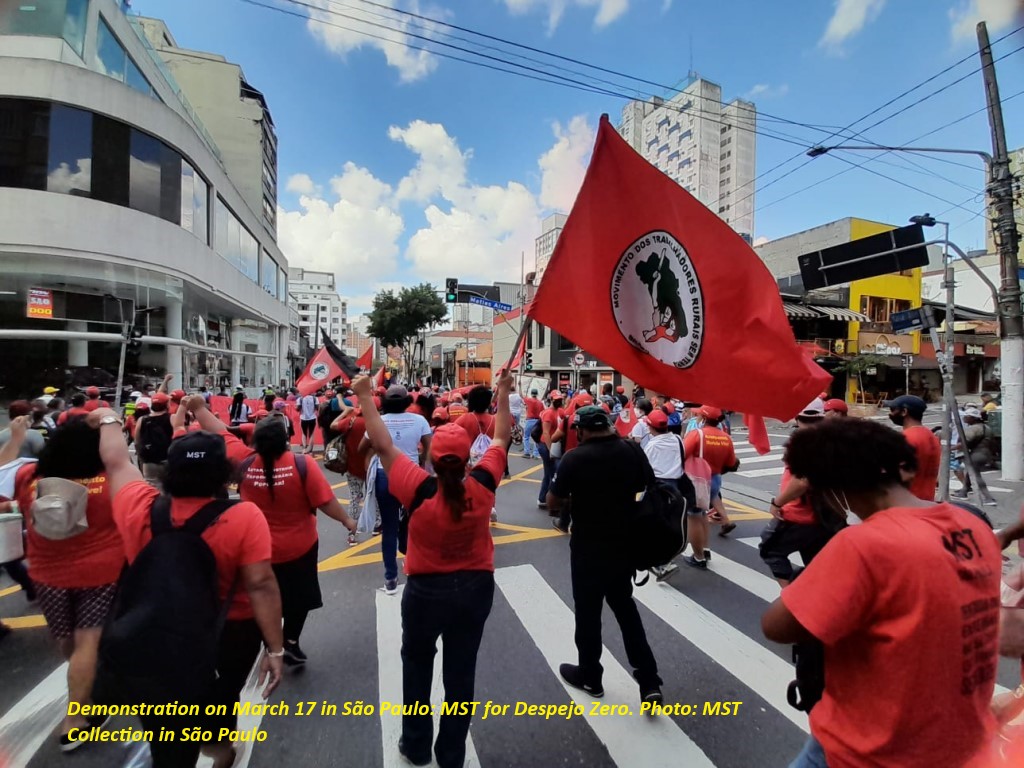 At the end of June, a century-old demand seems to have given a truce to 500 thousand people who were threatened with evictions and forced removals in Brazil. After much struggle, Despejo Zero, the Zero Eviction Campaign, coalition of various social movements, managed to extend the deadline for the decision of the Federal Supreme Court (STF) that prohibits evictions until October 31 of this year.

The decision of the STF minister, Luís Roberto Barroso, was made official last Thursday (June 30), ensuring that, during this period, the 142,385 thousand families threatened with eviction in the country can remain in their homes and occupied territories.

The struggle for housing and human rights runs through the entire history of the Landless Workers Movement (MST), which joined other urban and rural movements to strengthen resistance in occupied areas in the city and countryside. “Just in the countryside we have a situation of 30,000 families who depend on the Claim for Noncompliance with a Fundamental Precept (ADPF) 828 to not suffer direct eviction; in a general perspective of the 90 thousand families of the MST in encampments, this has been very important”, said Kelli Mafort, from the national leadership of the MST.

With an emphatic speech, Kelli Mafort emphasizes that the suspension of evictions in Brazil is a victory of the people's struggle in different ways. She highlights, for example, a petition filed with the STF on June 15 this year, asking the Court to extend the measure. “In this request, we gathered a vast argument linked both to health factors, as well as to the social deterioration in the country, which justified the extension”.

In this way, the MST defends the people’s struggle and the pressure of society to put life above any other interest and for the right to food, housing, land and work. For this reason, the Movement was present in different actions of the calendar of struggles for Zero Eviction, such as the week of June 21, when dozens of actions were carried out in all major regions of the country, with mobilizations in rural and urban areas of the states. 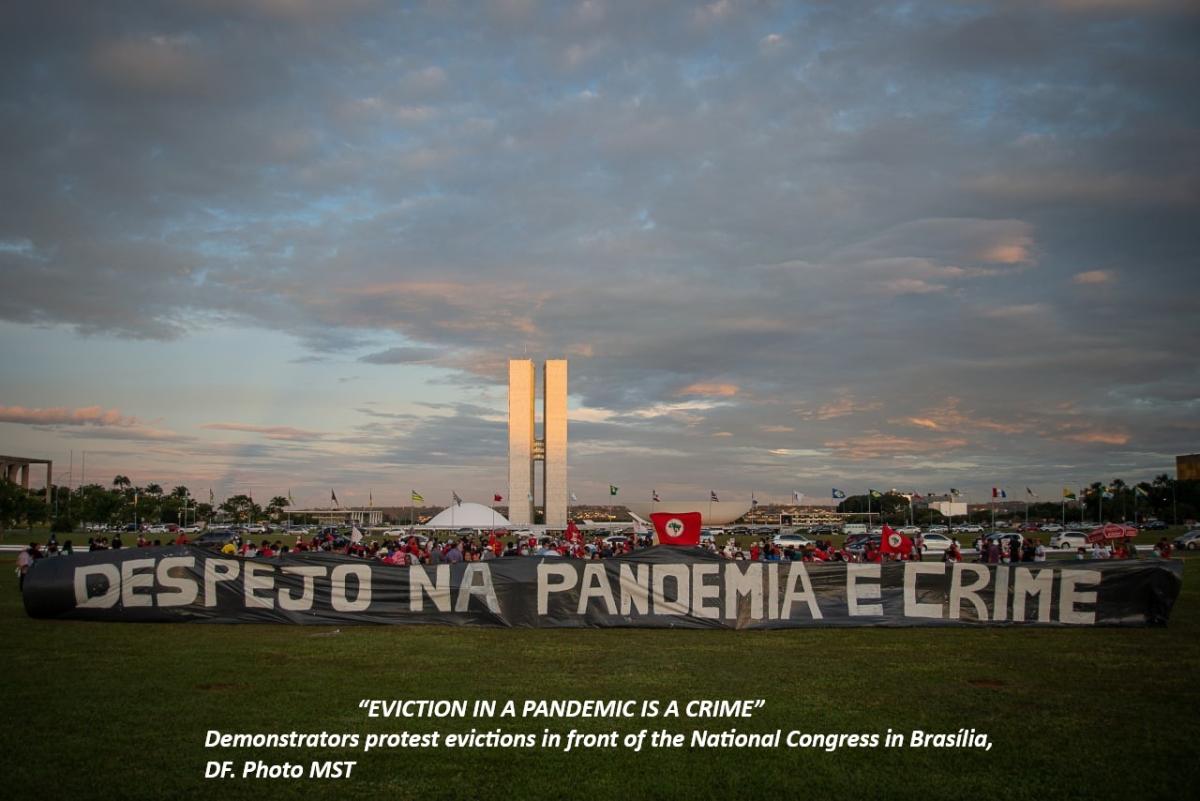 For Mafort, these actions help to strengthen both the bonds of unity in the struggle for land and housing, of urban and rural movements, and in the political coalition that the Zero Eviction Campaign has built with the STF.

“In addition to the Landless and Homeless subjects, who were protagonists of these resistance struggles, we also had the involvement of the society that accompanies these urban and rural encampments, and people who support different segments of society, such as the trade union movement, universities, and popular organizations. This was also very important in this decision by the STF”, Mafort.

By taking part in the struggle for the extension of ADPF 828, the MST has promoted internationally the denunciation of evictions as a violation of human rights and the worsening of the risks that it offers amid the current health, social and economic crisis in Brazil. To facilitate the mobilization and pressure the STF, a support petition was created that has versions in Portuguese, Spanish, French and English, which could be signed by people and organizations around the world who support the fight against evictions in Brazil.

In all, more than 1,000 letters from different countries around the world were sent to ministers for the extension of the ADPF. “By having a capillarity of international support, the Movement turned to its committees of friends of the MST in other continents mobilized for this eviction agenda. This campaign for the extension was undertaken by these friends, some of them parliamentarians who sent letters to the Federal Supreme Court, involving a greater number of society”, says Mafort. 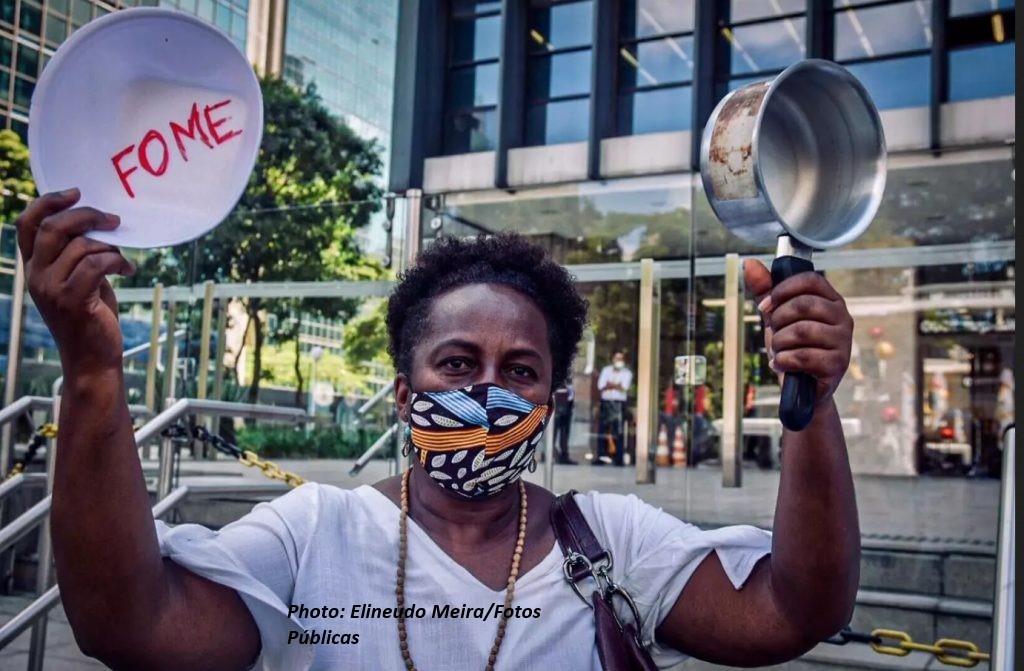 The urgency of zero eviction in cities and countryside today

The international concern with the evictions in Brazil was a relevant point in the decision made by Minister Barroso, according to Mafort, although the preponderant factor for the extension is the health issue. “This has been the main argument used by Minister Barroso to guide his decisions. He says that it is not up to the Judiciary to interfere or even dictate land or housing policy, so the pandemic is still a factor that the STF highlights, even more so due to the increase in cases of contamination by Covid-19 and the increase in the moving average of deaths “.

In addition to the health aspect, it is necessary to consider the social and economic impacts that the pandemic has left, especially on the lives of the poorest, in addition to a worsening of living conditions due to other factors such as unemployment, rising prices for food, rent, cooking gas and fuel.

“Another factor considered by Barroso was what he calls the “social scourge”, identifying how much the economic situation has worsened and affects the poorest. As an example, the Minister mentions that, in Rio de Janeiro, 31% of homeless people have been there for less than a year, and that most of them, if they had a job, would not be on the streets”, he recalls.

In this sense, data that 33 million Brazilians are hungry, according to the 2nd National Survey on Food Insecurity in the Context of the Covid-19 Pandemic in Brazil, were put forward as arguments in this regard, in addition to the fall in the average income of Brazilians, especially the poorest. “All this made the Supreme Court reach this preliminary decision to extend ADPF 828. For us, the eviction situation would greatly worsen the social framework since, at any moment, we could have 500,000 people evicted”, says Mafort.

Mafort also highlights two other preponderant factors for the MST regarding the need for extension in addition to those highlighted by the minister. “The first is linked to the electoral issue, as having 500,000 people on the street in an election year could be an even more aggravating factor; the other factor is the increase in violence. The situation of escalating violence in our country greatly worsens the problem linked to the issue of evictions. So, for us, these two factors that we are paying attention to are very sensitive and delicate”.

As an example, Mafort cites the case of indigenous people in Mato Grosso do Sul, who were violently evicted and, in a situation of struggle and repossession of land, resulted in the murder of two indigenous people. “In that situation, there was no court order, evictions were suspended in the pandemic. The police were called at the request of the farmer and acted as gunmen, in a set of completely wrong, mistaken factors. If that already happens with ADPF 828, imagine without ADPF”.

When living is a privilege, insurgency is the order

In view of this situation, Mafort recalls that it is important to emphasize that ADPF is in effect and the evictions are suspended, but that a confirmation of this decision by the Supreme Court is still scheduled for the 4th and 5th of August. “We hope that the majority of the ministers, as happened in the other times, follow the rapporteur's vote and that this period can give us a breather”.

Even so, Movements and parliamentarians are looking for ways to avoid mass evictions after the elections. “We also understand what the rapporteur points out to PL 1501, a bill authored by federal deputy Natália Bonavides from the PT. There is a certain expectation on the part of the STF for the importance of a transitional regime so that repossessions in Brazil can take effect again, so that evictions are not made like a bomb. PL 1501 talks about a staggering of this transition policy, about taking into account the time of occupation of that community, whether it is consolidated or not, if it has public facilities, has a school, if it has a health unit, the reality of the place”. 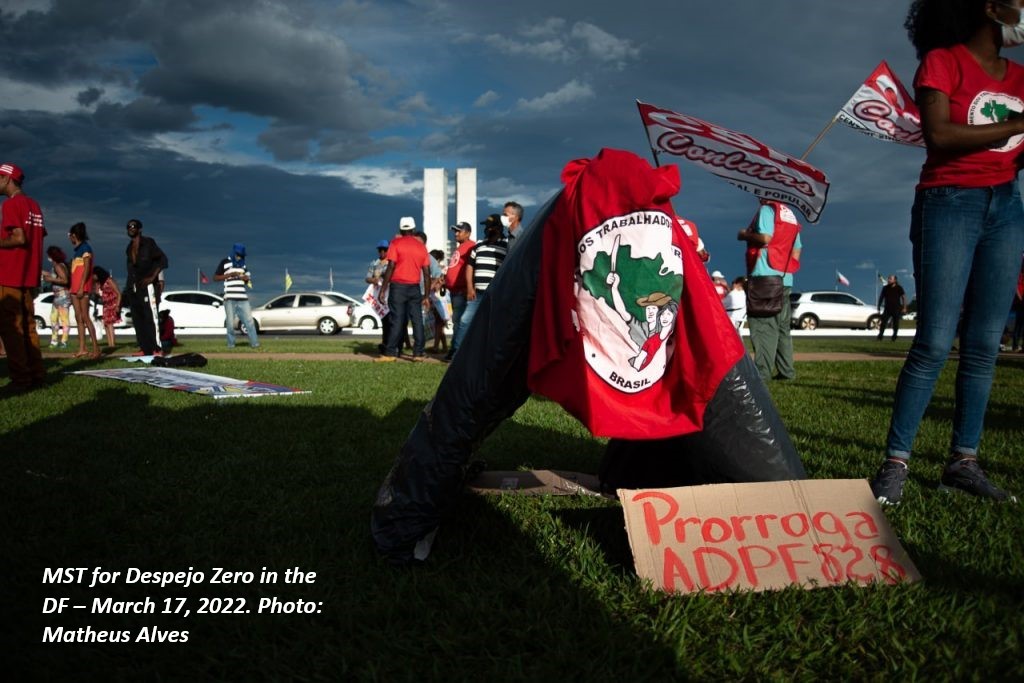 All these movements take into account the search for a plan so that no eviction that violates human rights is carried out. Among the alternatives that are still being developed, all emphasize that a massive process of evictions can lead to an intensification of social conflicts in the face of a problem that has affected Brazil for centuries.

If the right to housing entered the list of fundamental rights, in 1948, in the Universal Declaration of Human Rights, the Zero Eviction Campaign continues to bring up the discussion, aware that it is far from being a specific or legal issue, but a structural problem in the countryside and in the city. In this sense, Kelli Mafort emphasizes that another important support for the argument for the Zero Eviction Campaign comes from Resolution No. 10 of the CNDH – National Council of Human Rights and Recommendation No. 90 of the CNJ – National Council of Justice.

“The issue is to take into account that forced removals are an exception, they should not be the rule, including the use of police force, observing Resolution 10 of the National Human Rights Council, which ensures solutions that guarantee human rights and preventive measures in situations of collective rural and urban land conflicts”.

In this way, several actions continue in full swing to prevent inhumane eviction processes. In addition to being monitored by the Zero Eviction Campaign, a coordinated group of organizations, entities, social movements and collectives have already managed to prevent 120 evictions and, in this way, more than 24,231 families have been able to maintain their homes. The fight for the right to a decent life and housing continues for all other families.