PORTO ALEGRE - The main leader of the MST in Brazil, João Pedro Stédile, called on Thursday (March 12, 2015) in Porto Alegre, during 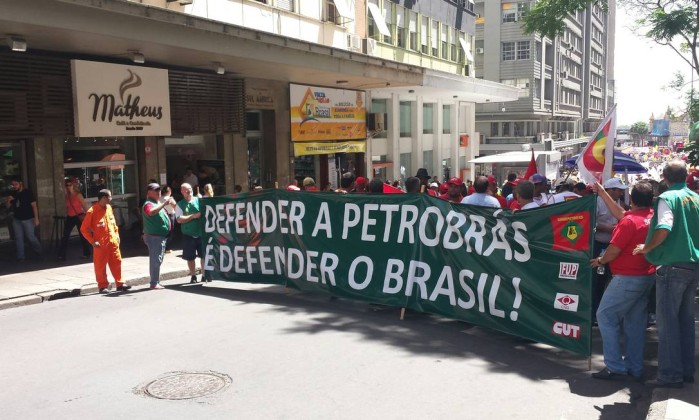 actions in defense of Petrobras, that President Dilma Rousseff "not become intimidated" in the face of pressure from the sectors of the country" who want to take power by force." Before an estimated audience of 5,000 people by the Military Brigade, Stédile compared the current political situation to the period of legality, when João Goulart was prevented from assuming the presidency with the resignation of Quadros[1]. He promised to "put the people on the street" after the demonstrations next Sunday (March 15, 2015), to ensure that the country "make the necessary reforms."

“If the bourgeoisie try to strike a blow, we have to make a commitment to occupy the squares, create encampments, and vigils right here in Rio Grande, as in the campaign of legality (in 1961), demand respect for democracy, keep the people united and march to Brasilia to demand that these idiots from O Globo [Ed. Brazilian media empire]and international capital, who want to get their hands on the off shore oil, respect democracy and the people can move forward. We also hope that our companion Dilma has the courage of old Brizola. Dilma, don’t be intimidated. Do not fall into the trap of neoliberal adjustment” Stédile said.

And he sent a message to militants:

“Prepare your game boots and shoes, the game is just beginning. Anyone who does not have a tent, buy one. Buy your shoes. We are here in the locker room, just getting ready.”

The statements were made during action in defense of democracy, constitutional political reform and Petrobras [Ed. Brazilian state oil company]. The demonstration was part of the agenda for action taking place in several other cities of the country on Thursday (March 12, 2015). Since 7:00 am militants linked to CUT [Central Workers Union], the CTB [Center of Brazilian Workers], the MST and Via Campesina, among others, occupied the streets of cities in the metropolitan region with tracks in defense of the state and against the minister, Joaquim Levy.

According to organizers, about 50 buses transported militants from various cities to Porto Alegre. There were delegates from the Sierra towns, such as Caxias do Sul and Farroupilha, and regions more distant from the capital, such as Lagoa Vermelha in the north. 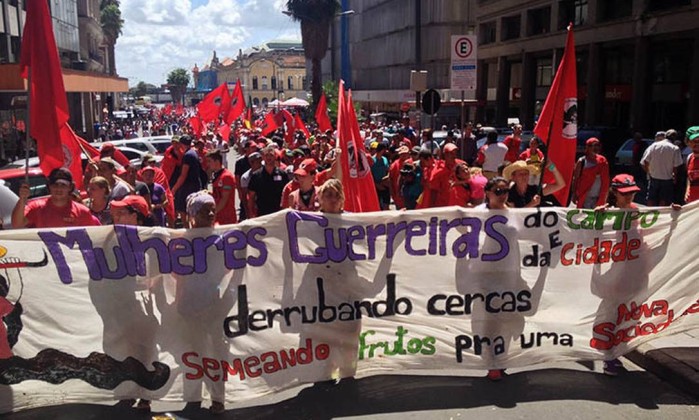 Last month, in a demonstration in defense of Petrobras, the Brazilian Press Association headquarters (ABI), in Rio de Janeiro former president Lula also urged the militants to defend the government and democracy.

“I want peace and democracy, but we also know how to struggle. Especially when Stédile puts his army on the streets, he said during the demonstration.

The MST leader made the same point to the PT to say that corruption is caused directly by the current model of financing of election campaigns. Stédile said that "half a dozen management bastards and thieves" cannot compromise Petrobras’ strategic role in the economy and that cases of bribery payment are "endemic" in liberal governments.

Stédile also criticized the composition of the Congress. According to the landless leader, 70% [of the Congress] was purchased by private financing of campaigns.

The landless also made a self-criticism to say that the movements that have left President Dilma "trapped" are "the result of our mistakes" - citing the official advertising in major media outlets which he said are opposed to the government as one of these errors. He added, in reference to the government:

“Who plants cucumbers won’t harvest watermelons, but will only harvest cucumbers."

Stédile also said he saw no problem in anti-Dilma and pro-impeachment demonstrations scheduled for this Sunday (March 15, 2015) in cities of Brazil. But he said they will not accept "threats." During the day, the MST's staff issued a statement saying that Stédile has suffered death threats and cited an ad circulating on the internet asking for the landless leader "dead or alive" in exchange for R $ 10,000 reward. The case was reported to the police:

“I don’t know what they are inciting on March 15. We have no problem that the bourgeoisie take to the streets on March 15th That is not the problem, you can come. But come to discuss ideas, not to make threats. Because we will put the people on the street tomorrow (Thursday, March 12) and after Sunday (March 15) too. This means that the struggle is just beginning. After the (March) 15th, Madams Globo and Bourgeoisie, we will return to the streets to ensure our rights.”

In an interview after the demonstration, the landless leader criticized President Dilma and said she was elected to make popular reforms, not a neoliberal adjustment. Stédile criticized the budget cuts in education and health and noted that since October last year (2014) no new program contract Minha Casa Minha Vida (My House, My Life) was signed.

He also said that the MST is still waiting for settlements promised by Dilma in the campaign. Stédile asked that the president orient the Ministry of Agrarian Development and the Minister Joaquim Levy to fulfill election promises - he mentioned that in the last two years, only 17,000 families were settled, out of the more than 90,000 who remain camped in the country.

“Dona Dilma, deliver Conab to the peasants because we know they produce food for the people without robbery,” he said.

The landless also advocated the nationalization of Brazilian Food Company (Conab), transformed by the PTB {Brazilian Labor Party, a rightwing political party], he said, as a paradise for the "crooked deals of agribusiness".

[1] Stédile is referring to the period in 1961 when Brazilian President Jânio da Silva Quadros resigned the presidency. The military, with the backing of the United States (both fearing a left-wing presidency and a repeat of Cuba), tried to prevent the vice-president, João Goulart, from assuming the presidency. The governor of Rio Grande de Sul, Lionel Brizola, started a resistance movement preaching the legality of Goulart’s succession. With the population mobilized, Goulart assumed power, only to be overthrown in a military coup in 1964.