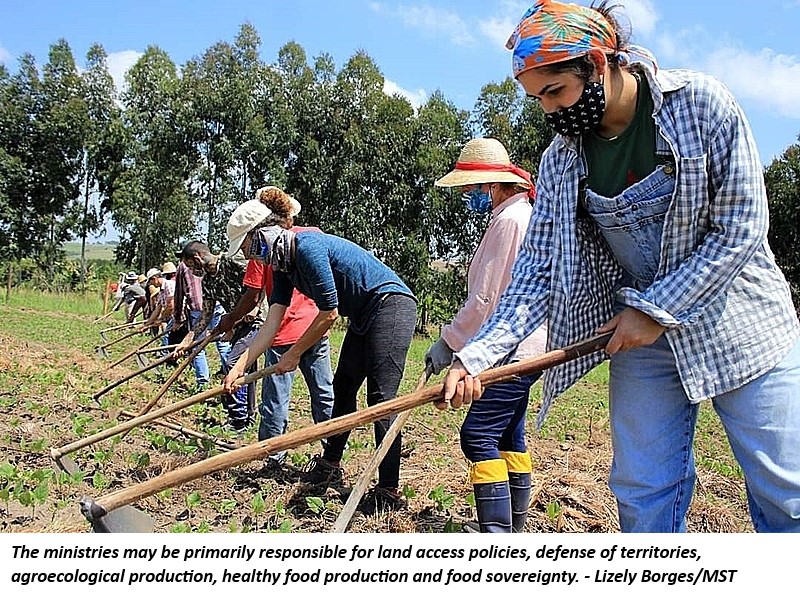 The Ministry of Agrarian Development and the Ministry of Social Development, currently relegated to secretariats, may be resumed by the next Brazilian government. Therefore, these areas may become the flagship of Luiz Inácio Lula da Silva’s (Workers' Party) progressive government, such as strengthening agrarian reform, agroecology, and family farming.

Today, there is an intense dispute over the appointment of ministers due to the broad alliance built during the electoral campaign. It is no different with the two ministries mentioned.

One of the names considered by the Ministry of Social Development is Senator Simone Tebet (Brazilian Democratic Movement), who will no longer be part of the Senate next year. This ministry will manage the coordination of social programs, focusing on the Family Grant program (Bolsa Família, in Portuguese), which makes the dispute even more fierce.

According to Michela Calaça, one of the leaders of Movimento Mulheres Camponesas (Peasant Women's Movement, in English), who has been following the transition group responsible for land issues, that is a “healthy” dispute. However, meeting the demands of the population has to be the priority of anyone chosen to lead these ministries.

“When talking about social development, there are many interesting options that may help the president. To me, however, the focus seems to be on the priority the president adopted, which is ending hunger and extreme poverty, and providing houses for everybody. The person whose perspective is strengthening this approach will surely be welcomed“, says Calaça.

In this joint effort to tackle hunger, one of Lula’s main agendas during the presidential campaign, Calaça thinks that the ministries may be primarily responsible for policies on access to land, defense of territories, agroecological production, production of healthy food and food sovereignty.

“We will only effectively tackle hunger if we build a structured policy for producing healthy food based on agroecology since eating anything will not solve the health and sustainability issues when fighting against hunger,” she added.

Calaça says that, at the current moment, one of the major obstacles is the influence that the agribusiness sector has on Brazilian politics. In addition to acknowledging the situation, she emphasizes that the goal should be to prevent agribusiness from spreading onto indigenous lands and to prevent environmental degradation.

The current situation "does not point to the overcoming of this model in the name of another model that is, in my opinion, more profitable for Brazil", she says. Therefore, knowing how to control this production model to strengthen other kinds of agriculture, such as family farming and agroecology, is critical.

These alternative ways of producing protect not only the environment but also restore it. It is possible to restore landscapes, watercourses, and the interaction between fauna and flora. But Brazil lacks the consolidation of agroecological policies, those that allow credits, land regularization and other types of incentives. For Calaça, this is the transversal path the next government should take.

Adopting the same perspective, José Josivaldo, from the National Coordination of the Movement of People Affected by Dams (MAB, in Portuguese) and member of the transition work group on rural development, states that the new ministry will “have to deal directly with agricultural issues, food production, and programs aimed at the rural population. That is the first thing we are sure of.”

“It will have to be a coherent ministry to meet family farmers. Our first proposal is that the ministry’s name change to Ministry of Family Farming and Healthy Food,” says Josivaldo, even though the ministry’s name is not a concluded topic among the members of the transition group.

There is also the possibility of including, within the ministry, a kind of internal affairs section to meet the demands of social movements and population groups. As Michela Calaça noted, these topics ought to be related to other ministries.