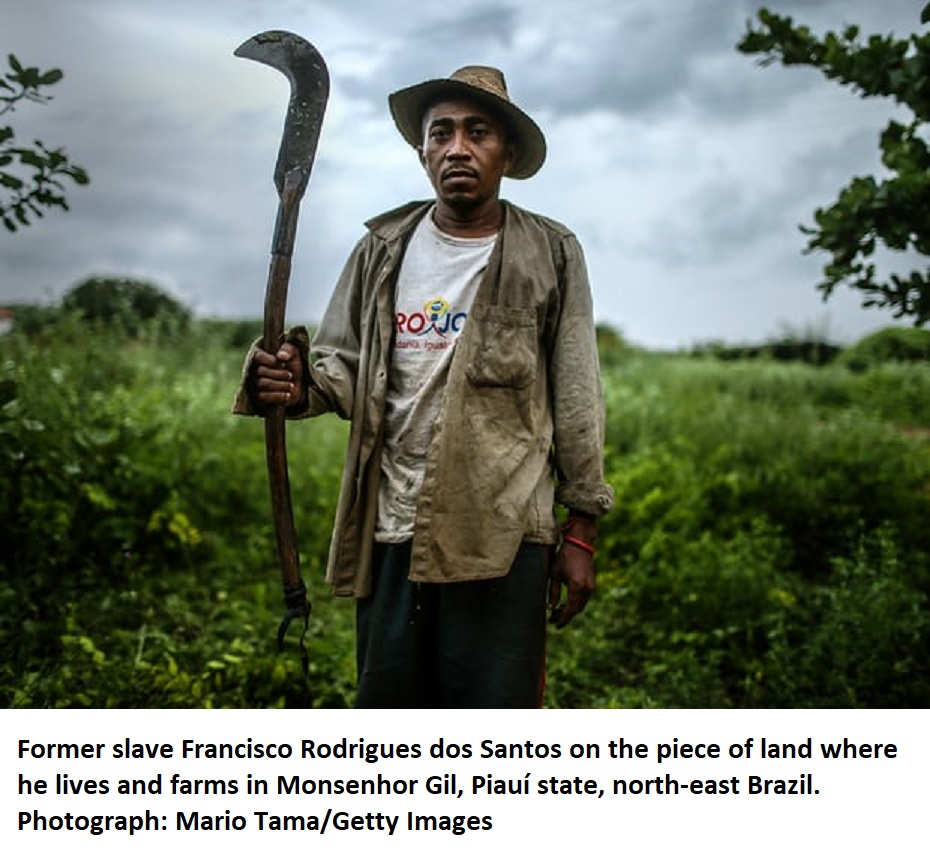 Many believe agribusiness pulled Brazil out of the worst recession in its history. Estimates for 2017 register a scant 0.4% growth after four years of crisis, according to the Boletim Focus from the National Central Bank. Agribusiness represents almost 23% of Brazil’s GDP.

Although renewed growth is good news for the world’s 9th economy, progressive sectors of society worry that the rise of agribusiness hides severe labor and environmental costs.

In October the Brazilian Ministry of Labor narrowed the official definition of what qualifies as “slave-like work” to include only situations in which the worker is deprived of freedom, be it through submission under threat of punishment from armed security guards or retention of documents, or debts. The ruling caused an uproar because it eliminated important criteria that included workplaces where workers face degrading conditions, exhausting work hours, and forced labor.

The Ministry also announced it would cease publishing its “dirty list” of employers who subject workers to abusive and humiliating conditions. The government of conservative president Michel Temer decided that those names will only be made public if and when the labor minister decides to do so. Since 2003 when the list began, the list comprised mostly names of wealthy farmers. After widespread protests and national and international headlines, the government rescinded the controversial reforms to the criteria for slave work. Later in the year, the minister of labor, Ronaldo Nogueira, left the government to run for congress. Still smarting from the controversy and with unemployment on the rise, the nation still awaits the nomination of a new minister

Even with the system to rout out slave labor, it continues to be a problem in the country. “Agribusiness in Brazil presents itself with a modern face, but it is based on a labor model in which the cruelest face is slavery”, says Brazilian anthropologist Maia Sprandel. The scholar explains that the violent slave system was not abolished in Brazil until 1888, making it the last western nation to legally eliminate slavery.

Slavery in the fields

Accordingly to Article 149 of the Brazilian Penal Code, the elements that define slave-like work are: degrading work conditions incompatible with human dignity, characterized by the violation of fundamental rights that put the health and life of the worker at risk; exhausting work hours, where the worker is submitted to excessive effort or overwork affecting health or life; forced labor, where workers are forced to work through fraud, geographic isolation, threats, or physical and psychological violence; and debt servitude, where workers are forced to work to pay off illegally contracted debt. These elements can be found together or separately.

Kelli Maffort, of the board of directors of the Movimento dos Trabalhadores Rurais Sem Terra (MST, Landless Workers’ Movement), says the problem persists because the global crisis of capitalism has led agribusiness companies “to intensify the exploitation of the working force in peripheral countries as Brazil”.

Sprandel, a member of the group on International Migrations from the Brazilian Association of Anthropologists and an associated researcher in the International Migrations Study Center at UNICAMP (Universidade Estadual de Campinas, The University of Campinas), states, “In general, it could be said that contemporary slavery is the ideal relationship for agribusiness since it enables the total exploitation of the work force and maximum gains while employing intermediate players who look the other way.”

“(This elite group) has stripped away rights from male and female workers, indigenous people, traditional communities, LGBT and feminist groups and so on”, Sprandel affirms. “The slaveowner mentality has persisted in the elite and it translates into racism and a quest to roll back rights, as seen in its new labor reform.”

When Michel Temer became president after the impeachment of Dilma Rousseff in what many believe was an orchestrated coup d’êtat, the political clout of large landowners increased substantially. “The group that took over power comes from the old white, elite power, based on land ownership. It uses the media to link to a newcomer elite made up of evangelical pastors, conservative police members and other actors with various immediate interests. All are very conservative on politics, labor relations and moral values”, Sprandel adds.

Maffort claims that currently politicians and landowners trying to roll back gains in workers’ rights by trying to change the laws that monitor slave-like working conditions in favor of agribusiness owners and managers and large landholders. The failure to properly address the land reform issue contributes to violations of rural workers’ rights. She also notes that the model is causing extensive environmental damage in the country.

The Temer administration continues to threaten to favor Brazilian agriculture at the price of one of Brazil’s greatest riche– the environment. The attempt last August to abolish the Renca reserve seems to be just a warning shot as Brazilian and foreign players take aim at the country’s environmental reserves to expand mining and agricultural activities. Environmentalists warn that the impact on Indigenous and traditional communities, and fauna and flora could be devastating.

“Although sugar cane hasn’t been significantly cultivated in the Amazon region and certain areas are not defined for agriculture, illegal deforestation still operates and currently cases are increasing that can be indirectly related to the expansion of agribusiness”, affirms Danielle Thame Denny, international environmental lawyer and member of Brazil’s Green Party. Recently, Provisional Measure 769/2017 legalized what Sprandel calls “ the broad takeover of public lands. This is characteristic of our elites, who believe in a minimal state and state privatization”.

In 2016, according to watchdog group Global Witness, Brazil was held as the deadliest country to be an environmental activist, with 49 killings, many occurring in the Amazonian rainforest. In that year, in which Temer tood office, the deforestation rate surged by 29%. A report by Defenders of the Earth exposes that the logging industry alone was linked to 16 murders with landowners considered suspects in many killings in the Amazon region.

Maffort emphasizes the intersection between modern slavery and environmental damage, noting that Brazilian agribusiness today not only attacks decent working conditions, but also leads the offensive against Brazil’s natural resources. She says that this has caused those affected, specially social movements, to rethink their relations and strategies.

Denny states that Brazil needs to find a sustainable balance between environmental preservation and use of natural resources to build a healthy green-friendly economy.

Large landowners have become more aggressive in pressuring both government and public opinion to advance their interests under what they consider a remarkably friendly administration. TV Globo runs prime-time television ads under the campaign “Agro é Tech, Agro é Pop, Agro é Tudo” (Agro is Tech, Agro is Pop, Agro is Everything). The content is produced by TV Globo itself, which is a behemoth in the media world. The same network highlighted the damages caused to society by modern slavery in its popular soap opera O Outro Lado do Paraíso (The Other Side of Paradise) where the villain Sophia (Marieta Severo) has a precious gems mine functioning with enforced labor and the evildoer is arrested in the end.

In August of 2017 before being denounced for passive corruption and obstruction of justice by the Prosecutor General of Brazil President, Michel Temer met with the Agricultural Parliamentary Front (FPA – Frente Parlamentar Agropecuária) leaders in São Paulo. The group is one of the most powerful in congress and one of Temer’s main donors. It currently has 200 congress members and 24 senators.

Denny believes that it’s expected for the so-called ruralistas to actively defend their interests, but the current political system gives them disproportionate power. “In Brazil, lobbying is prohibited, but there is nothing wrong if the exercise of influence is done legally”, explains Denny. In contrast to the United States, in Brazil, lobbying is banned as synonymous with exchanges of favors, bribes, corruption and other bad practices. Denny argues that it should be legal and regulated and exercised through arguments, data, academic research, and scientific results to introduce politicians to a group’s agenda.

“The problem lies in the unevenness of political representations at the city, state and federal levels.” Denny believes that to create a counterbalance, “a society organized for the defense of socio-environmental interests would be very productive.”