The Draft Budget Law of 2018 will still be analyzed by the Chamber of Deputies, this Wednesday, September 6, 2017. 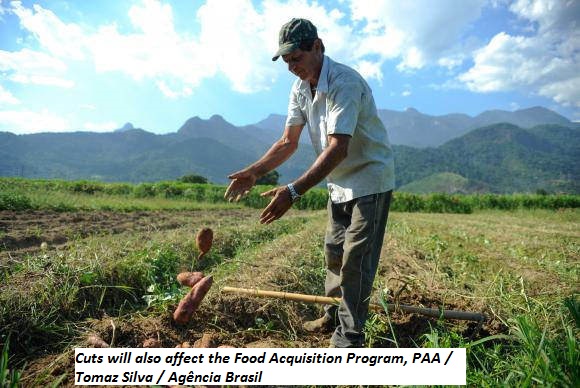 According to a study presented by Gerson Teixeira, former president of the Brazilian Association of Agrarian Reform, and João Intini, technical advisor to the leadership of the Workers' Party in the House, the reduction may reach 95% when compared to 2015.

This is because the amount destined to land for agrarian reform for 2018 will be R $ 34.2 million. In 2015, still under President Dilma Rousseff's government, this figure reached R $ 800 million.

According to Alexandre Conceição, a national coordinator of the Landless Workers Movement (MST), the government will create even more instability in rural areas.

"This proposal that the government presents, it tends to increase still more the agrarian conflict and the violence in the countryside, that the agrarian latifundia [large estates] has been causing. From the point of view of the public policy, it means that the government is terminating all the assistance programs technical, production of healthy food, marketing food from family farming," he said.

The bill, which will still be analyzed by the Chamber of Deputies, will also be discussed at the Committee on Agriculture, Livestock and Food Supply on Wednesday (September 6, 2017).

In response, popular movements filed a request for ministers Eliseu Padilha, chief minister of the Civil House, and Blairo Maggi, minister of Agriculture, Livestock and Supply to be called to explain the budget cuts.

For Gerson Teixeira, faced with such a drastic measure for the countryside, the confrontation is urgent. "From a formal, protocol point of view, they will always say that these cuts are justified because of the fiscal crisis." Now, we know that in practice it is an absolutely unbalanced budget. It is principally affecting the poor population,” he pointed out.

The cuts will also affect the Food Acquisition Program (PAA), which is responsible for the trade in food produced by Brazilian small farmers. Of the amount earmarked in 2015 for what Temer announced this year, the program's budget will go from R $ 609 million to just R $ 750 thousand.

According to Aristides Santos, president of the National Confederation of Rural Workers, the movements will have to react to this. "We are going to have to do all the national mobilization, call the trade union movements, the social movements of the countryside and society as a whole, because we cannot stop such essential programs, so important for the countryside," he said.