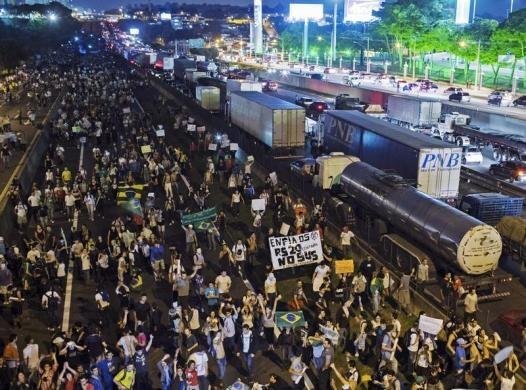 A member of the Movement for the Free Pass (MPL), Caio Martins, explains that in the midst of the demands that have arisen during the protests, the focus continues to be on the revocation of the fare increase.

Members of the MPL participated today in a press conference at the Journalist Syndicate and a meeting with representatives of the Secretary of Public Safety of São Paulo. At the press conference, amongst the points discussed and in front of more than 90 journalists, the movement declared a meeting with Governor Fernando Haddad (of the Worker’s Party) for the following week. As it had with state government, the MPL affirmed that it will not divulge the plans for the next protests, including what happened today at 5:00pm in Largo da Batata, Pinheiros (SP).

In relation to the government, the movement said that the meeting called for this Tuesday, which will include hundreds of members of City Council, will not resolve the problem. According to the MPL, this is not a suitable space to negotiate the reduction of the fares as it will not be a deliberative meeting.

However, both the Mayor and Governor of São Paulo, Geraldo Alckim (PSDB), made it clear that the demands made by the MPL to lower public transit fares, which rose from R$3.00 to R$3.20 on the first of the month, will not be accepted by the government.

In an interview with Brasil de Fato, a member of the MPL, Caio Martins explains the relationship between the movement and the state and local governments. “In a general sense, they have received the protests poorly,” he said.

“The outrage over the political repression is an outrage over the crackdown against the transit fare struggle. In the middle of all this are the R$.20, which have not stopped being the central issue and continue to unite the movement as a whole,” he highlighted.

Brasil de Fato – What is your evaluation of the protests thus far?

Caio Martins – It is a very different protest from those we’ve done previously here in São Paulo. It seems like a new thing, but what is happening here is what has already been happening in other Brazilian cities, which is a popular revolt generated by a struggle against the increasing cost of public transit.

It is a protest that is unprecedented for us in terms of level of popular revolt against the increase. The mobilization in the streets is very strong. The MPL is a small force of this and doesn’t have control over what is happening. In truth, what happened today is a massive, widespread and popular demonstration.

In all the years that the fares have increased, the MPL has organized protests all over Brazil. In your opinion, what led the fight to expand in this way, with more and more people joining the demonstrations?

In a way, we always plan this. This year it worked. I think that people have a general disposition to fight, in the sense that, in the last ten years, there has been a revolt around Brasil and in São Paulo there hasn’t been one in this way yet. Once it entered peoples’ minds there was a strong increase in the movements on the street.

Lastly, the government did not raise it above the rate of inflation, but we must be conscious of the fact that all of the increases are unjust. Not just the question of inflation, but the idea of raising transport fares is absurd as well.

With respect to the treatment received by the MPL, what has changed between the previous administration of Gilberto Kassab (Partido Social Democrático) and the current Haddad administration?

I used to think it would be different [with Haddad]. But in many senses it has been quite similar. The government originally said they would look to talk with us, but they’re efforts to negotiate with us have been very little. In a general sense, they received the protests poorly. At the beginning it looked promising. Haddad spoke with the President about lowering the fare, but he then changed his position. Now his position is almost uncompromising that he will not lower the fares, and I believe he could have had more dialogue than he is currently.

Another characteristic of the movement is that there hasn’t been a banner of a specific party in the protests. Do you think that this also influences people to believe that this movement isn’t about political parties and that this makes them more optimistic?

In fact, it’s not a movement that is within one group, not even the MPL. It is the people that are in control of the struggle.

Beyond the 20 centavos (roughly $.08 US), what are the other motivations that are mobilizing people?

What’s important is that when we talk about transportation we’re talking about the entire city: transport in a general sense, the organization of the city and the outrage with the police crackdown. However, it not only continues to be about the twenty centavos that are in the middle of this. The outrage over police repression is an outrage with the repression against the fight over transit fares.

The twenty centavos are no longer the only agenda of the protests as a whole, but do remain the central one.

Supposing that the fares were reduced, do you believe the protests will stop?

At the least the protests against the increase will stop. However, over the last week we have seen a group that wants to fight. For us this is something relatively new.

Both representatives from the PSD and PT, in the first to days of the protests, claimed that the protesters were vandals and stated that they did not accept these types of demonstrations. After the 3rd and 4th protests they began to dialogue with the movement. What happened, in the opinion of the MPL, to make them change their position?

What happened was that they wanted to isolate a single demand and the way they handled the original protests created an even larger mobilization with much popular support from various sectors of society that has only continued to grow.

The current moment is different. I don’t know how Kassab would have handled a movement like this. Haddad is leading during something that is really quite new.

But do you think that he could have taken a different attitude to have avoided the biggest errors?

At a minimum he could revoke the fare increase, he’s having unnecessary problems. He’s already said what it costs, but regardless of what it would be, it’s very little for the government. He has a budget of R$43 billion. It is almost 1% of the budget, slightly more. He has money for this and would not need to suffer this struggle. He could revoke the increase.

We hope that there haven’t been infiltrators also, because they take away the police and put police in plain clothes to break things.