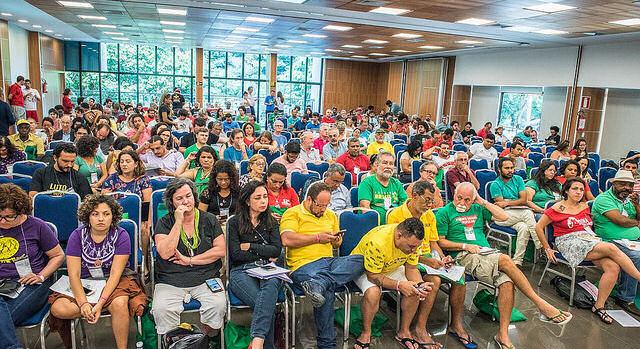 On December 7 and 8, nearly 300 leaders of 100 popular organizations of Brazil gathered to update the political platform of the Popular Brazil Front. The meeting, which was held in Belo Horizonte, was attended by a wide range of sectors of society including youth, peasants, healthcare workers, unions and religious organizations.

This meeting is a part of the process to build unity among the political arch of the opposition to the coup that is in force in the country. The economic, political and institutional crisis were the main items of debate, which concluded, among other points of consensus, with the launching of a campaign called ‘Direct Elections Now’ to elect a new the President and restore democracy. Demonstrations are already scheduled for 2017.

Regarding the economic analysis, the Popular Brazil Front warns about a future scenario of economic depression in the country. According to economist Mario Pochmann, who participated in the plenary session, the country is in a state of recession.

The measures adopted by the government of Michel Temer aim at destroying the rights of workers and don’t allow the country to recover, and would lead the country to an economic depression. ‘Nowadays, industries represent merely an 8% of the GDP. In a few years, in the state of Sao Paulo, the industrial pole of the country, lost 400 thousand jobs and over 150 thousand are expected to disappear the upcoming year. This is not a recession, but a depression,’ the economist explained.

The national plenary session updated the political platform and the proposals to exit the crisis. The platform includes proposals to fight against the coup and Temer’s presidency, to hold a direct election for President of the Republic, to defend the rights of workers, education, healthcare, social security, women, Afro-Brazilians and the LGBT community, defend democratic freedoms, promote a political reform and strengthen the sovereignty of the country, resisting privatizations and protecting natural resources.

In 2017, demonstrations will be held against the reform in Social Security, against the Proposal for Constitutional Amend No. 55 and other measures to eliminate the rights of workers. In April (or ‘Red April’ for social organizations who commemorate the murder of peasants in 1996) there will be a day of protests.