The bill was voted and approved by the São Paulo City Council and was officially published by the Parliamentary Secretary Genera on September 4, 2019 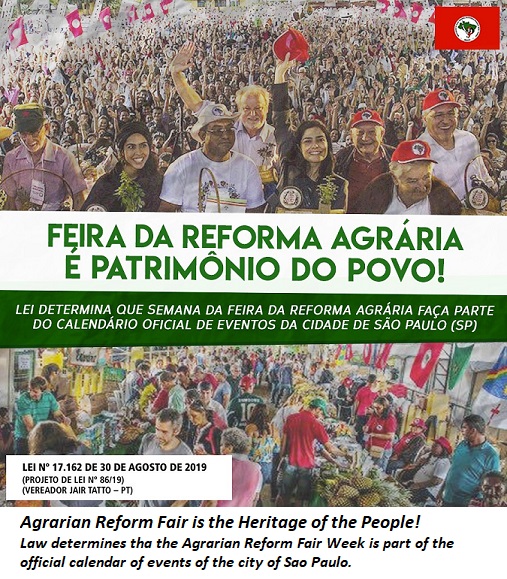 The bill was voted and approved by the São Paulo City Council and was officially published by the Parliamentary Secretary General.

According to Jair Tatto, "the project aims to give greater visibility to family farming and organic production, the result of the Agrarian Reform process throughout the country."

For the national coordination of the MST, the approval of the law shows the importance of the Agrarian Reform fair in the city of São Paulo. And although it is only one step, the doors of the municipality will be much more open to the fair in the Água Branca Park. "

The annual MST fair, which was scheduled to take place on May 2, was postponed due to the non-release of the Água Branca Park, in the west of the state capital.

The fair was not authorized by the government of João Doria (PSDB) on the grounds that the structure of the park does not support the event.

The MST continues to try to provide solutions for carrying out the activity that is now officially part of the city's calendar.

Amending Law No. 14,485 of July 19, 2007, to include in the São Paulo City Events Calendar the Week of the National Agrarian Reform Fair.

"XCVII - first week of May: the Week of the National Agrarian Reform Fair."

(NR) Art. 2 This Law enters into force on the date of its publication. City Council of São Paulo, August 30, 2019. EDUARDO TUMA, President