The conflict began September 2nd, after a court order from the Justice Ministry; the cases relates to land reform 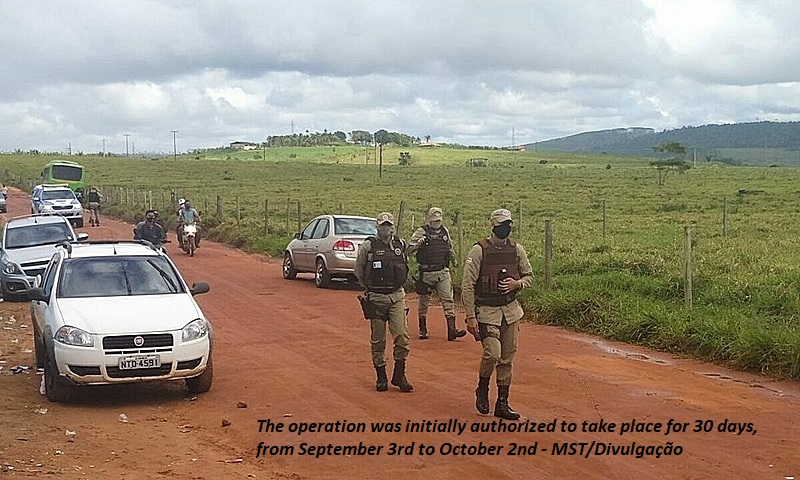 Related to a dispute between the Rural Landless Workers Movement (MST) and agricultural elites, the National Guard deployment to settlements in the state of Bahia, is the newest noteworthy occurrence in Brazil’s countryside. The issue came to light nationally after the Bolsonaro government sent the troops in last Wednesday, September 2nd, after a court order from Justice Minister André Mendonça.

A day prior, the department head had published decree 493, authorizing the troops’ actions in southern Bahia. The official language of the document cites support for the Ministry of Agriculture Grazing and Resources (Mapa), in efforts dealing with settlements linked to the National Institute of Colonization and Land Reform (Incra) within local municipalities.

Coordinated by the Federal Police, the operation was initially authorized to take place for 30 days, from September 3rd to October 2nd, with the possibility of being extended. Since the soldiers arrived, they have been amassed in the municipality of Prado, an area with a strong MST presence.

For example, the location is home to the Rosa do Prado settlement, which is made up of 265 families. The Movement suspects that the actions by Federal agents is connected to a separate political attack on a different settlement 50 km from Prado, where another 223 MST families dwell. The area is a hotspot for battles waged between family farmers and large scale land owners, especially eucalyptus estates.

The political narrative that led the National Guard to the location has its origins in previous occurrences. The MST says that it was surprised when, on August 26th, a couple who had been kicked out of the Prado settlement on July 31st 2019, showed up escorted by the military police. The officers said they were there to protect an Incra representative in their party. MST militants say that this official did not identify himself on the occasion.

The following day, on August 27th, the couple returned to the area with an additional 13 people, in an attempt to re-enter the camp. The two were kicked out after being accused of involvement in the drug trade and cattle theft. The couple’s removal was decided by a general assembly, which determined that they were not residing on the premises with their family after building a house there, furthermore, that they had been away for more than 30 days without notice, and also that they missed collective labor duties for 3 consecutive days, and for 6 alternate ones. They were allegedly carrying firearms on settlement grounds as well.

The sending of the National Guard to the region, indirectly ties internal settlement conflicts to an intervention by the Federal government in the matter. In the court order, André Mendonça affirms that the troops were there to help Incra “in indispensable services and activities that preserve public order, people and possessions”.

The decision received harsh criticism from Bahia’s state governor, Rui Costa, who says he was caught by surprise. “The laws are very clear in stating that the National Guard is not a federal force. It is a force to aid cooperation among the Federated states, the law establishes that the National Guard can only be used if called for by, and in agreement with state level authorities. The state of Bahia wasn’t even informed”, the governor said this past Wednesday, August 9th, highlighting that the measure “completely sidelined the law”. He is currently working on a direct appeal on the basis of unconstitutionality, to take to the Supreme Court.

For the MST, the government’s initiative is interested in “taking advantage” of past internal dissidence, to create a narrative that will criminalize the Movement within Bolsonaro’s framework, which has large scale agricultural interests as one of its main political backers.

The movement points to the Jacy Rocha settlement as one of its strengths inside the state of Bahia. Exclusively producing crops utilizing agro-ecology, a technique that uses no pesticides in its harvest, the unit is seen as a model for MST and serves as a reference to other efforts in the region, where the Movement has consolidated political efforts with good results on various fronts. An example of this is the construction of the Egídio Brunetto School of Agro-ecology and Agroforestry, located within the settlement.

The Movement believes that the peoples’ struggle for land reform in southern Bahia has inflamed their ideological opponents. “For us, this is nothing more than a dispute aimed at destroying the MST where it is strongest. The movement here in Bahia helps galvinize the struggle on a national level, therefore, we are in a region where we have strength, and the right is angry at our efforts”, said Vitor Passos, an MST director in the state.

In a press release dated September 2nd, the organization affirmed that among other things, the Bolsonaro government is trying to “fragment the territory.” See below.