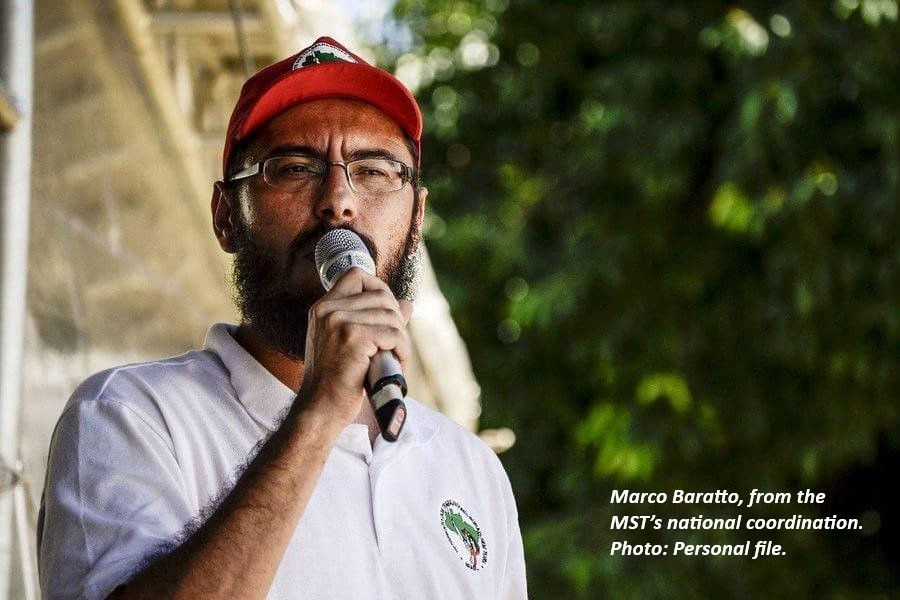 In a context of increased hunger and misery in Brazil, the goal of the Day is to denounce agribusiness and the genocidal Bolsonaro government, which is responsible for the loss of more than 600,000 lives to Covid-19. At the same time that it contributes to the increase of hunger in Brazil, agribusiness expands its profits by exporting commodities and leaving a trail of misery, hunger, blood and deforestation.

La Via Campesina reaffirms that it is from peasants that the way out of hunger and food insecurity comes. That we have the experience to reorganize the agrarian, productive and food system for the dignity of our people and not for hunger.

In an interview, Marco Baratto, from the national leadership of the MST, analyzes the role of agribusiness in the current situation of the country and how food sovereignty represents a solution to the crises that devastate Brazil and the world.
Check it out:

What is food sovereignty and why is it so important for the working class worldwide?

Food Sovereignty is the radical democratization of the processes of organizing the production, commercialization and distribution of food, having in the respect of the food culture of each territory, in the control of work and of the means of production, the necessary elements that organize the life and nutritional culture of the people.

It is important to emphasize that food sovereignty and popular sovereignty go together, because it is the working people, especially peasants, family farmers, rural, water and forest peoples, subjects who build and rescue the cultural diversity and care for the various socio-environmental territories, where the act of eating, of feeding oneself, contributes to organize people’s lives, whether in the countryside or in the cities.

That is why more than 70% of the food necessary for the complete nutrition of the people, on a world scale, is produced by peasants, guaranteeing quality and diversity on the table of the working people. It is the small markets, the short marketing circuits, that guarantee supply and in fact can combat hunger, and for this, it becomes increasingly necessary that family farmers and peasants have access and full control of the means of production necessary to produce healthy food for all people, without distinction.

Today, what are the main challenges in the struggle for food sovereignty?

The struggle for Food Sovereignty goes through the struggle against the devastating model of agribusiness. It has in agroecology and agrarian reform the fundamental pillars of dispute, presenting another model of agriculture, sustainable, without poison, with productive diversity, with popular control of the means of production and that the goods of nature, so necessary for the survival of peoples, are preserved as a social and environmental heritage of humanity.

Can we say that Bolsonaro represents a threat to food sovereignty in Brazil? Why?

Absolutely. Bolsonaro is an enemy of the people. He does not have, and never had, any commitment to food security and sovereignty of the people. His commitment is to death, to poison, to the destruction of nature. He encourages violence against rural peoples, human and environmental genocide. He is an enemy of the biomes, and an ally of the sectors that violate rights and violate the peoples who take care of the land and territories, who produce food and culture. His agenda is one of backward agribusiness, pistolization and environmental crimes.

Misery, hunger, food inflation are once again a reality among Brazilian families. Can food sovereignty be an answer to this scenario? Why?

Food sovereignty and popular agrarian reform are essential for the survival of the peoples in society, especially the peoples who live in the cities. There is no future without a profound and radical change in the land and food structure in our country. It is only with the democratization of the land and with popular control of production and work relations in agriculture that we will be able, in fact, to overcome a large part of the ills that devastate the people, such as hunger, misery, violence, and inequality.

There is a deep connection between these current social ills and the hegemonic forms capitalized by the agribusiness model and the impact of its actions on the environment. The major pandemic crises, diseases, are the fruit of this model and the imbalance caused. The 601,000 deaths by Covid 19 in Brazil are closely related to the destructive mode of production of agribusiness.

What is the purpose of the National Day “Food Sovereignty: Against Agribusiness so that Brazil will not go hungry”, that Via Campesina Brazil is organizing this year?

The National Day for “Food Sovereignty, against agribusiness so that Brazil will not go hungry” aims to denounce agribusiness and its transnational companies that control the food chain, claiming that they are the main culprits for the advance of hunger in Brazil and in the world, for the high prices of food, for the environmental destruction and for the crimes of violence against the peoples.

Reaffirm also their responsibility for the advance of Covid 19, being co-responsible for the genocide of more than 600 thousand lives of Brazilians up to now.

At the same time, we have come to reaffirm food sovereignty and popular sovereignty as an alternative to the model of agrarian capitalism, which only produces hunger and misery. On this day, we will continue and deepen our actions of solidarity, donating tons of healthy food for the Brazilian people, in all states of Brazil, the fruit of agroecological production of the peoples of the countryside, waters and forests, which in fact are the ones who feed the Brazilian people, the true guardians of biodiversity.