National Coordination of the MST: Letter to the Brazilian People

The Movement signed commitments in the struggle for Agrarian Reform, against the 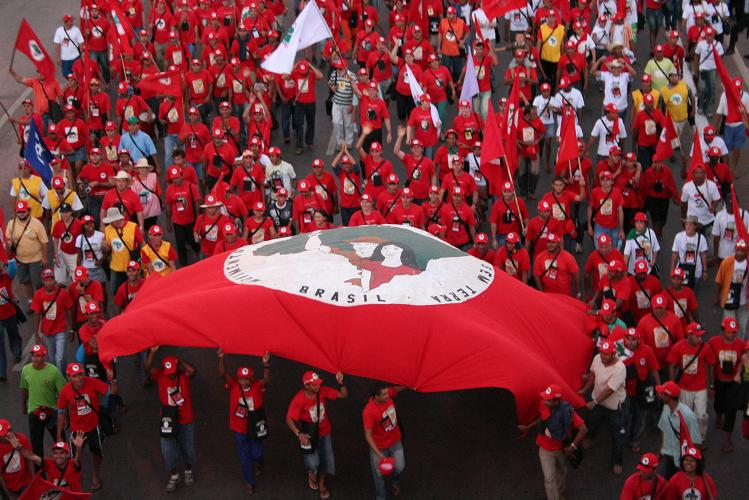 withdrawal of rights of the Brazilian people, in defense of the environment and national sovereignty

By the National Coordination of the MST

From the rebellious lands of Minas Gerais, and in solidarity with the families of Vale's victims in Mariana and Brumadinho, the National Coordination of the Landless Rural Workers' Movement, meeting in January 2020, reaffirms its commitment to the peoples’ organization, the struggle for Agrarian Reform and social transformation.

We witness here in these lands the aggression of finance capital toward our natural resources and the living conditions of the people, causing the death of people, rivers, plants and all biodiversity, as a toll on the wealth of its uncontrollable profit. We are here to affirm the people's fair fight for their liberation and for a life without the perverse logic of the accumulation of agribusiness and mining.

Capital, undergoing a deep crisis, imposes unemployment, hunger, withdrawal of social rights, precarious work, violence, extermination, privatization, destruction of the environment, expropriations, the plundering of natural and strategic resources from the peoples of the world. It promotes wars of all kinds and threatens human existence, both for its project that is destructive to nature, and also for its ultraliberal agenda that accentuates social inequality and increases the privileges of the ruling class.

This death project is neo-fascist, hates democracy and participation of the people. It produces far-right governments and states that serve the interests of the wealthiest. It promotes coups, destabilizes economies and incites social chaos.

In Brazil, the Bolsonaro government is handing over the country to the interests of the United States, handing over our lands to foreigners and breaking up the national economy to the detriment of capital. It attacks the sovereignty of the peoples and the existing natural resources. Bolsonaro is a manager of the elite power project and acts under military tutelage in collusion with a significant part of the judiciary and the congress and governs with the militias and with the corrupt.

In the countryside, he wants to make land grabbing legal and wants to hand over 70 million hectares of public land, especially in the Amazon, to those who have deforested it, destroyed it, evaded taxes and murdered people. He intends to reward those who declare themselves the owners of land stolen from Brazilians.

Bolsonaro legitimizes the action of gunmen working for agribusiness, authorizes extermination, cuts down the forest and destroys biodiversity. Everything to expand the agricultural frontier, mining and the profits of transnational corporations. Defending the Amazon means defending Brazil, the people, their territories, life and the environment.

Our duty is to act on the contradictions of this project of the elites, as they have no solution for the main problems that affect the Brazilian people. We must mobilize in the face of the dismantling of social, labor and social security rights. In the face of the widespread violence, the persecutions and murders of men and women who are in struggle. We must be outraged at the mass poisoning of the people through food and water, promoted by agribusiness.

We are committed to occupying the large estates in the countryside and the cities. Fighting for social rights and not allowing setbacks to occur. We are ready and willing to contribute to the legitimate uprising of the mass of people.

We reaffirm our commitment to the land, to life, ensuring healthy food for all people. We stand for a People’s Project for Brazil. We will continue to fight in defense of national and popular sovereignty.

We are in solidarity with all the workers in the world in struggle. We reject coups and interventions. We defend the legitimate sovereignty of the peoples.

We will be on the streets with women, with the youth, with the teachers and the working class. We call on the Brazilian people to fight the necessary battles, to keep up the struggle and build a fair and egalitarian society. A socialist society!

National Coordination of the MST