Scheduled for December 9, an international audience will have complaints from the MST on human rights violations in the Brazilian countryside 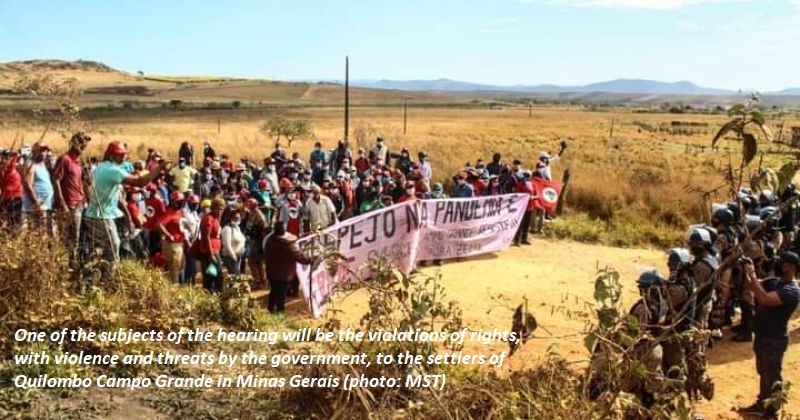 On December 9, the Inter-American Commission on Human Rights of the Organization of American States (IACHR/OAS) will host the Landless Rural Workers Movement (MST) to listen to the interlocutor of movements in the Brazilian countryside about the paralysis of Agrarian

Reform in the country. .

The Thematic Hearing of the IACHR will be conducted by the President of the Commission, Joel Hernandez, of Mexico, and will be broadcast live on the court's networks as of 11:00 am in Brazil. The MST will demand that the Commission give visibility to human rights violations in the Brazilian countryside and that it recommend to the state measures to protect the violated populations.

There were two requests from the Movement that gave rise to the hearing: a precautionary measure filed in reference to the protection of threatened families at Camp Quilombo Campo Grande, in Minas Gerais, and a request for a Thematic Hearing on evictions in the pandemic.

Thematic Hearings are specific sessions of the IACHR on certain issues, mobilized by organizations directly linked to the topic to be addressed. The only request from Brazil accepted by the Commission was that of the MST, despite requests from a variety of NGOs. The Movement will be represented by national leaders at the hearing, including João Pedro Stedile, from the MST national leadership, and Ayala Ferreira, from the Human Rights Sector.

Also participating, as guests of the MST, the president of the National Confederation of Bishops of Brazil (CNBB), Dom Walmor Oliveira de Azevedo, the president of the National Human Rights Council (CNDH), Renan Soto Maior, the Nobel Peace Prize recipient Adolfo Perez Esquivel and lawyer Marcelo Azambuja, who works at the international human rights court. The hearing will be attended by three other international commissioners and representatives of the Brazilian State, who must respond to questions.

Read more: Brazil is notified by the InterAmerican Court about violations in the eviction of the Quilombo Campo Grande encampment (in Portuguese)