During the congress of the CUT, in Porto Alegre, João Pedro Stedile pointed out the main challenges of the working class at this juncture. 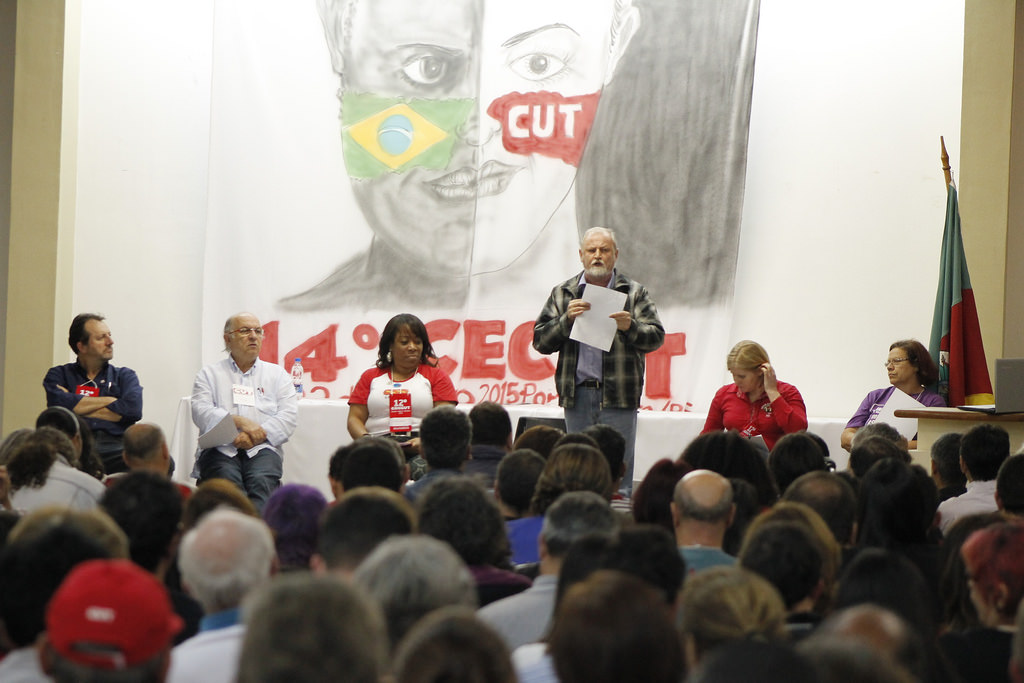 The exit for the existing crises in Brazil and the role of the working class to confront the coup attempts were highlighted by the national MST leader João Pedro Stedile, last Friday (8/21/15), during the 14th State Congress of the Unified Workers Central (CECUT), in Porto Alegre (RS).

According to Stedile, in the last two years Brazil has entered into a process of crisis that now involves the economy, politics and Brazilian society.

For him, the economic crisis is the result of structural dependency that the economy has on international capitalism and the influence that transnational companies have on the Brazilian economy.

"The bourgeoisie controlled the interest rate and foreign exchange rate to facilitate their accumulation process. And, despite the crisis, many international capitalists continued making money and profits continued to be sent abroad, making more serious the situation, because instead of our wealth be reinvested in Brazil and feeding our economy, billions of dollars were transferred outside the country, from the branch offices to headquarters," he explains.

According to Stedile, in the view of many economists, the economic crisis in the Brazil should last at least another two years, since there was considerable drop in the sector's investment level.

"If there is no productive investment, there is no expectation of creating the return of the short-term growth," he argues.

According to the MST leader, the political crisis in which Brazil lives is the result of a "perverse political and electoral system" that prioritizes corporate interests and is defended by the bourgeoisie.

"We know that the ten largest companies elected 70% of the Brazilian parliament. Today there are no more party blocks, there are only the parliamentary blocks of Monsanto, the Bradesco, Odebrecht. And those politicians elected by these companies do not feel committed to their party program, but primarily those who funded their campaigns," he complains, adding that if there is no profound political reform, every two years the country will live a Lava Jato [“An investigation being carried out by the Federal Police of Brazil since March 17, 2014. Initially a money laundering investigation it has expanded to cover allegations of corruption at the state-controlled oil company Petrobras, where it is alleged that executives accepted bribes in return for awarding contracts to construction firms at inflated prices.”**].

"The situation of Lava Jato makes the bourgeoisie, in their media, use moral criteria trying to find culprits. So, when someone from the PT [Workers Party] appears, the [media coverage] is for the whole week; when someone from the PP [Progressive Party – a conservative political party] appears, there are 30 seconds [of coverage]; and the Toucanos [Brazilian Social Democracy Party – center-right political party], which took more money in Lava Jato, does not appear [in the media] at all. The problem is the Brazilian political-electoral system, that the bourgeoisie did not want to have denounced, because for them, political reform is not favorable," he says.

Stedile said that in addition to economic and political crises, Brazil is experiencing a social crisis, which was the substrate for the mobilizations that occurred in June 2013 in the country.

"Many subjects denounced by the kids that took to the streets have not been resolved. On the contrary, there is increased homelessness in large cities, reduced access to the universities and there are still problems in public transport, which require heavy investment, especially public, since the private sector has no interest in investing due to delay for profitability. There is a latent crisis for our youth, for which Brazilian society is not responding. And so, sooner or later, this will burst," he warns.

The MST leader pointed out distinct exits [from the crisis] held by different sectors of society to confront the existing crises in Brazil, ranging from a return to neoliberalism, to the impeachment attempt, to the construction a unitary program that advances economically, socially and politically.

The proposal of the bourgeoisie would be the resumption of neoliberalism through the Agenda Brazil. This proposal provides for the realignment of the Brazilian economy to the US, reducing the state's role and cutting labor costs.

"The bourgeoisie cannot do the ideological struggle in the open and tell society that its proposals represent a return to neoliberalism, this is because this program has already been defeated four times in the elections. So they try to make possible their program by institutional spaces where they have hegemony. Then these proposals come on the agenda of the National Congress and the judiciary, even trying to influence the Dilma government through her bourgeois ministers, changing the name from neoliberalism to Agenda Brazil," he added.

According to Stedile, the defender the coup as a solution to the crisis is the petty bourgeoisie, known as the middle class, which represents between 5% and 10% of the population.

"The impeachment, supported by Senator Aécio Neves (PSDB [Brazilian Social Democratic Party (Toucanos), center-right party]) would not solve Brazil's problems, however. The legal feasibility of a coup against President Dilma only worsens and brings a fourth crisis: institutional. Today, even the replacement of the vice president Michel Temer (PMDB - Brazilian Democratic Movement Party, a center-right party ) and not a new election would solve the three crises which we live. What we need is historical building blocks of classes that present alternative programs," he advised.

To the MST leader, there are great challenges for the working class in the face of the country's problems, and not all of its sectors also realize the severity of crises.

"There are among us reductionist readings that think the only problem is to overthrow Dilma. But in the medium and long term, our problem is more strategic: is to develop a unified program to take the country out of crisis from an economic, social and political point of view, and discuss it with society so that it understands the moment we are living," he said.

Stedile also advocates the creation of a mass mobilization movement to "take the people off the couch" and causes the correlation of forces in favor of the working class, as well as a political core that is capable of aligning the necessary changes for the country.

"Dilma lacks a political nucleus that surrounds her and makes correct assessments of the correlation of forces, of what is happening. She has pity for the talk to those ministers. Levy [Joaquim Levy, Minister of Finance], as well as being neo-liberal, has no vision for Brazil. What he's doing, reducing the problems of the Brazilian economy as if they were budget issues, is a disaster. I hope that Dilma sees this soon in order to change it as soon as possible," he says.

The MST leader said that economists should launch in the coming days clear alternative proposals for economic policy, and address the need for investment to resume growth in Brazil.

"There are structural issues of the economy that will take a long time to be resolved until there is a resumption of productive investments. But there are practical and immediate issues that need the minimum of discernment, like this, to lower the interest rate, not to cut social spending and finance industries so there is economic growth, employment and income distribution in the country," he concludes.

The national situation and the steps to address the crisis and guide new directions for the country were discussed by Stedile together with the director of the Lula Institute, Paulo Vannuchi, during the 14th State Congress of Central Union of Workers (CECUT). About a thousand people attended the activity held in the event hall of Paróquia Pompéia in the Floresta neighborhood.

*A proposal developed by the social movements, labor unions and other sectors of the working class to have a single program that addresses the economic, social and political crises in Brazil.