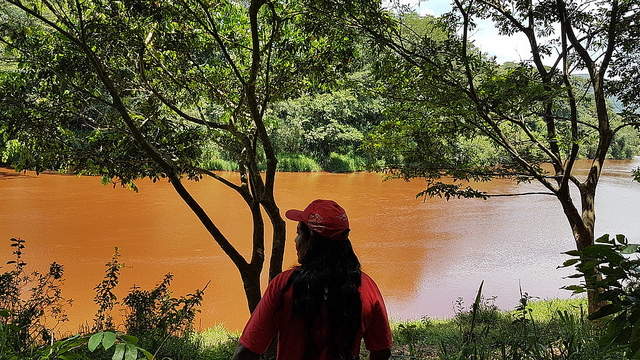 The clear waters of the Paraopeba River in São Joaquim de Bicas (MG), metropolitan area of Belo Horizonte (MG), were filled with mud and changed their color. What once was crystalline now has texture and coloring similar to an oil paint: dense, viscous, brownish. The desolate scenery is aggravated by the odor of decaying fish.

One of the main tributaries of São Francisco River, the Paraopeba  is living proof that the rupture of the Vale dam in Brumadinho (MG) eight days ago did not only affect the residents of Córrego do Feijão (MG).

At the Pátria Livre encampment of the Landless Rural Workers Movement (MST), which houses around 400 families, the farmer Ângela Fernandes Costa proudly shows her plot of cabbage, chuchu, okra, spring onions and condiments without pesticides. Besides the contributions for the subsistence of the families, the sale of the products on the highway to Brumadinho-Betim is its main income source.

The other residents praise the organization of Angela's shack, which represents the space she struggled to conquer. Despite the relaxed moment - and the smile that opens when praised by the glow of their pots – her face changes when it comes to the rupture of the Vale dam.

Ângela comments that it is impossible to measure the impact of crime on the routine of the Pátria Livre encampment. "How are we going to irrigate our plants? There’s no other way. Let's get the poison, the mud from the river, and throw it on the plant? If the fish are dying, imagine the plants, "she says. It's all toxic. We are not in the habit of using anything toxic on our plants. Our food is healthy. I do not want poison on my plate," she says.

The contamination that the residents of the Pátria Livre camp witness with their own eyes was confirmed on January 31 by the State Secretariat of Agriculture, Livestock and Supply of Minas Gerais. The Minas Gerais State Technical Assistance and Extension Company (Emater) advises that rural producers not to use Paraopeba water for irrigation, animal consumption or domestic activities. "The springs directly affected by the tailings may contain substances harmful to human and animal health. In addition, the turbidity of the river indicates more suspended sediment, which could harm water collection and irrigation equipment," he said in a statement, advising those who live on the riverbank to remain 100 meters away from the water.

So many of the camp's day-to-day activities were suspended. "We can’t use the boat because there is no way to cross in the mud, we have no ground, we will see what is going to happen, we do not know how to survive," Angela laments.

Working in the kitchen of the encampment, Dagmar Danatividade da Silva, also admits that she is distressed: "We are lost indeed. Most people fish to sell, to consume. We used water to cook, to bathe, for everything. "

At age 73, Ana Margarida Mendes, called Dona Ana by her neighbors, is one of the best-known landless in the encampment.  Beside her husband, Geci Santiago Mendes, 67, she takes care of a vegetable garden with more than 50 varieties of fruits and vegetables.

Dona Ana's passion are the medicinal plants: she guarantees that there is no medicine for sale in in the pharmacies that is not in your garden.

Married for 42 years with Seu Geci, the farmer says that their lives have changed a lot since they arrived at the encampment, one year and 6 months ago: "My health got a lot better. I was taking 18 pills a day, and now some days I do not take any."

The sadness caused by the breaking of the dam is noticeable in Dona Ana's voice and look. "It's a threat. There can be contamination through the wind. There is a bad smell from the fish that died. Not to mention that we caught the little fish from time to time, now it's over. We no longer have a river to wash, to wash clothes, to fish. We do not have it any more," she mourns. "This carelessness has cost dearly to everyone, beyond the lives that were lost."

In the Pátria Livre encampment, the Elisabeth Teixeira school in the State of Minas Gerais, also has classes from the first to the ninth grade, complete secondary education and Youth and Adult Education (EJA).

The school is located in the lower part of the camp, very close to the banks of the river Paraopeba. "If there is any flood or a breakup, we are in an area of risk," says student Josiane Rodrigues do Santos, 26. "I have small children who need fresh air, who need a school."

Located in São Joaquim de Bicas, the Pátria Livre encampment was set up a year and eight months ago. Families live on site in shacks built with wood.

The presence of the MST activists changed the landscape of the place. Pasture areas became lots, plantations and vegetable gardens. The residents remodeled the physical structures, built the school and started discussing with the community the importance of agrarian reform, agroecology and the production of healthy food.

According to Josimar Aquino, of the state coordination of the MST, the rupture of the dam must rekindle debates about the impact of mining on the environment and the danger that miners offer to the population of the Metropolitan Region.

"Vale is in the whole Paraopeba complex, it's in Ibirité, Sarzedo, Mário Campos, Brumadinho and Igarapé, and when it does not have a Vale sign, it's mining companies that sell the ore to it. How many rivers are we going to allow to die?” he asks.

The area occupied by Pátria Livre belonged to the bankrupt MMX group, owned by businessman Eike Batista, sentenced in 2018 to 30 years in prison for active corruption by the Court of Rio de Janeiro.