Friday, November 13, 2020
Agrarian Reform
General
Plans and Theories
Brazilian Politics Society and Economy
Info Source:
By Maura Silva | From the MST Page | Edited by Ludmilla Balduino | Translated by the Friends of the MST (US) | https://mst.org.br/2020/11/13/mst-discusses-proposals-for-building-a-peoples-project-in-brazil/

In a conference of the series ‘Reflections in Times of Pandemic’, four guests analyze post-capitalist solutions to start a revolutionary people’s project 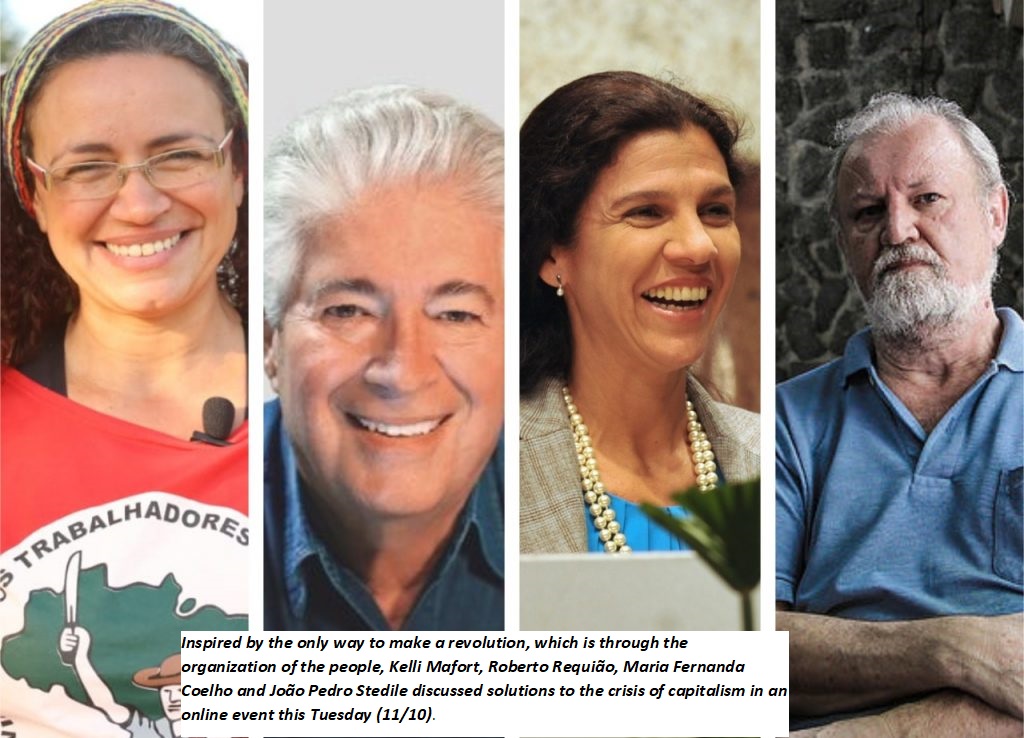 As part of the series Reflections in Times of Pandemic, on November 10 the Landless Workers Movement (MST) hosted the former governor of Paraná, Roberto Requião, the former president of Caixa Econômica Federal and undersecretary of the Northeast Consortium, Maria Fernanda Coelho, and representatives of the national coordination of the MST and the Brasil People’s Project, Kelli Mafort and João Pedro Stedile, to discuss the urgency of a People’s Project for Brazil.

During the discussion, which was moderated by Teresa Maia, from the Brasil People’s Project, and by Jonas Duarte, professor at the history department of the Federal University of Paraíba (UFPB), the guests spoke about the urgency of developing actions for the maintenance of rights of the working class.

Life changes when people get organized

Once this crisis is diagnosed, it is imperative that we can present strategies for the working class. The necessary and popular solutions to the structural crisis of the model of society in which we live must be built by different hands.

According to Kelli Mafort, the economic, political, social, health and civilization crises put pressure on the State to act to contain the effects. “This State responds by becoming increasingly militarized, repressing and spreading fascist, conservative and reactionary ideas. This happens worldwide, but mainly in Latin America. Even in the face of this adverse situation, our task as left-wing organizations is ongoing grassroots work. To do this, it is imperative to understand the different reality of the working class in Brazil, taking into account diverse and subjective aspects such as gender, ethnicity and sexual orientation”, she stressed.

Mafort advocates raising the consciousness of the masses, so that, from that point on, struggles can be fought. “Only with organized people do we change lives, this is the story of the MST and our organizations,” she added.

What project do we want and what strategy will we use to carry it out?

This effort in the construction of a new project can be seen in the birth of the Brasil People’s Project. Founded on anti-capitalist, anti-imperialist, anti-racist and anti-patriarchal pillars, the program requires building unity among many groups and individuals.

While it is not a government program, it does not need a particular party to make it happen. The bridge for its realization and support is just one, the people.

In his latest encyclical, Fratelli Tutti, Pope Francis comments on the Covid-19 pandemic: "it is difficult to think that this global disaster is not related to our behavior in the face of reality".

And researcher Esther Solano states we need to dive into subjectivities, because they determine and validate behavior and support the economic agenda.

It was with these references that during the conference, Maria Fernanda Coelho advocated Tax Reform as fundamental to opening new horizons in the country.

“Today our Tax System is perverse, it charges more from those who earn less, it is socially unjust, it burdens productive activities. It is not enough just to simplify taxes. We need to reform it, change the contribution, taxing large fortunes, exonerating those who consume less and produce everything they earn”, he said.

She also presented data from the recent Oxfam Brasil study that shows that millionaires in the world grew 27.5% amid the pandemic. The 42 millionaires in Brazil increased their wealth by more than 180 billion reais from March to July 2020. This is practically the same amount that was paid in emergency aid for workers during this period.

In other words, just what these 42 people earned in a few months would be enough to pay aid to the more than 60 million people in vulnerable situations.

While 42 people enrich themselves more than the rest of the country, a third of Brazilian households live with some level of food deprivation. Maria Fernanda also presented recent data from the family budget of the Brazilian Institute of Geography and Statistics (IBGE), which show the effects of the economic crisis, worsened after the 2016 coup. In 2017 and 2018, in the North and Northeast, the percentage of families that suffered some type of deprivation was higher than those that had regular access to food.

“There is no social justice with people going hungry. Reviewing and guaranteeing the reform of this system is fundamental to fight hunger and inequality”, said the former president of Caixa Econômica Federal.

Structural violence is broken when we investigate the source of inequalities

Maria Fernanda also cited the structural violence that allows us to have first and second class citizens, and that determines the abandonment of these same citizens with an imperative to maintain the concentration of wealth.

“This daily violence that permeates our relationships, racism, machismo, the culture of rape, is systematic and historical. Recent experiences show that research on the source of inequality makes us break with it”, she concluded.

Capital does not produce, but concentrates and lives mainly on the concentration of its wealth

In the same vein as Maria Fernanda, Roberto Requião emphasized that the key at this point is to take the discussion forward and create a more prepared and critical basis for systematic change in Brazil.

When applying the Washington Consensus - a project that formulated ten measures to reform and liberalize the world economy - Brazil was transformed into a land of large estates, losing the diversity of food production and dedicating itself to producing the necessary for the countries that want to fatten up their cattle.

“The choice of this path has made us today hostages to a senseless liberalism that produces failure all over the world. In view of this, we need a proposal for a political front that makes possible a national unity that stands in favor of the democratization of communication, Agrarian Reform, that respects the rights of the working class and, of course, that has a policy expand and increase access to the SUS [Unified Health System] ”, he said.

João Pedro Stedile, of the national coordination of the MST, spoke about the responsibility of the left in this construction of a revolutionary people’s project.

“We are content with a project for the country, neo-developmentism, which was important within that context. It made the economy grow, recovered the role of the state, guaranteed workers’ rights, full employment and income distribution. Then came the crisis, the coup against the Dilma government, the coup government of Temer and now the neo-fascism of the Bolsonaro government”.

We are facing the crisis of the capitalist mode of production. Financial capitalism does not produce goods and does not solve the basic needs of the population.

As a way out, a new climate emerges in Brazilian society to discuss projects. Projects with post-capitalist foundations because we have already seen that capitalism does not solve our problems.

A project with theoretical and scientific consistency, with a political platform and immediate initiatives that solve the situation of the people.

“It will be a long journey, but only those who know the destination will know where they are going. In our case, the project is the destination. We are discussing the civilizing future of people living in this historic moment. And, for that, just take the first step and walk towards a people’s project for Brazil”, concluded Stedile.

This was the second meeting of a series that can be accessed on the MST YouTube channel. In the first meeting, Bela Gil, Lula, Letícia Sabatella and other guests discussed solutions to guarantee food sovereignty in Brazil and in the world.

Watch the conference (in Portuguese) that discussed the urgency of a people’s project: