Friday, October 16, 2020
Food Sovereignty and Sustainability
Agrarian Reform
Brazilian Politics Society and Economy
Info Source:
Ludmilla Balduino | From the Página do MST | Edited by Wesley Lima | Translated by Friends of the MST (US)

Conference discussed the concept of food sovereignty and strategies for having local and healthy food on the table; watch 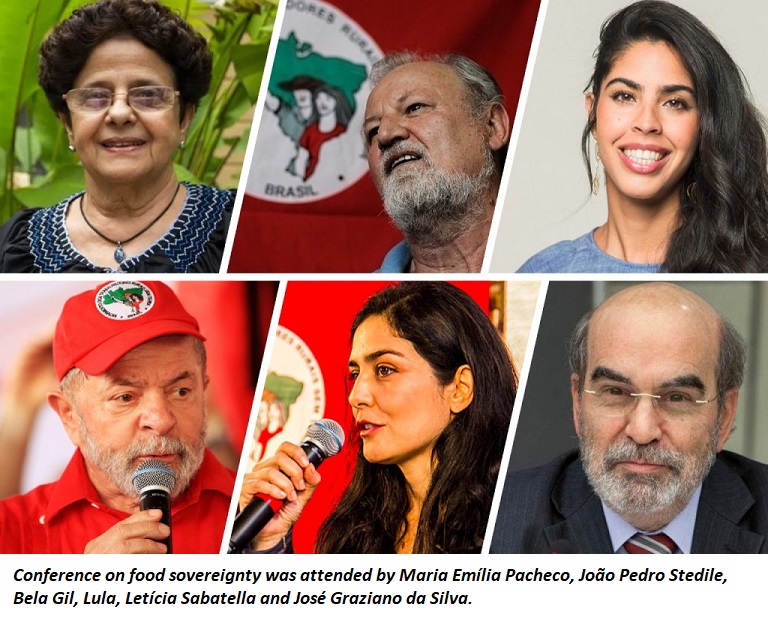 This past Thursday (10/15), the MST presented an online chat that discussed the implementation of food sovereignty in Brazil, seeking references in the past and building a plan for the future. The conversation, broadcast live, can be viewed on the MST YouTube channel.

During the program, the guests talked about the urgency of developing actions to achieve food sovereignty in Brazil.

What is food sovereignty?

Food sovereignty is when everyone is aware that they can choose what to eat. For this to happen, it is necessary to ensure local agroecological production and universal access to healthy food.

Not for nothing, the theme was the first in the series of conferences to be presented by the MST. Food sovereignty is an urgent matter. At 10 months of the coronavirus pandemic in the world, the symptoms of the Covid-19 epidemic are added to the symptoms of other epidemics, such as diabetes, cancer, heart problems, obesity, depression and anxiety. In this context, we are currently experiencing what scientists call “syndemic”*: the increased severity of the consequences caused by these epidemics.

In addition to the syndemic, the 2016 coup and the capitalist system made Brazil return to the hunger map. According to Professor José Graziano da Silva, agronomist and former president of the Food and Agriculture Organization of the United Nations (FAO), the estimate is that there are 15 million people going hungry right now throughout Brazil. In addition, there are about 65 million people eating insufficiently, that is, skipping meals like breakfast, or skipping food to feed other family members.

According to a FAO document with data from 2019, about 10% of the people who live on planet Earth are starving - this means around 700 million people without food-.

For food sovereignty to be a reality, it is necessary to give access to land for the production of healthy food instead of commodities. “The concept of food sovereignty that was built by us, students, teachers and thinkers of the MST, is directly related to a political project of occupation of the countryside. It is linked to peoples' rights to access to land and policies that guarantee their survival on land,” says Keli Mafort, leader of the MST.

"It is necessary to democratize the opportunity to choose food," says Bela Gil

Mediated by Ana Terra and Jaime Amorim, both from the MST, the conference began with presentations by artists from the Movement in Pernambuco, followed by Bela Gil's speech.

The culinarian and TV presenter who popularized healthy eating in Brazil spoke about the importance of democratizing the opportunity to choose food. For her, food education is essential for children to learn about the choices they can make. Thus, "this dream of seeing all Brazilians consciously choosing the food to put on the plate becomes a reality," she said.

Bela also spoke about the social issue of food sovereignty. "It is important for us to understand: who is going to make organic and healthy food?" she asked, referring to the peasants and traditional peoples who work respectfully with the land.

After all, for Bela Gil, healthy food is not something that is only on the plate. “It is necessary to talk about food in addition to the dish. Healthy food must grow on healthy soil, it must respect the land, nature, and protect farmers.”

Bela showed a data that signals the main responsible for the current climatic events: it is the activities of agribusiness, which emit 50% of the greenhouse gases in the world. And she made a request: “Food is a powerful tool for transformation. The impact this has on health is great. If you have money and can choose to change the way you eat, make that change.”

The culinarian defends land reform as the path to food sovereignty. "Agrarian reform, together with tax reform, are the most important for the country, for us to have food on the table for all Brazilians."

Ana Terra added that “seeing hunger and rising food prices puts us in a position to reaffirm the need for agrarian reform based on agroecology, producing healthy food for workers in the city to build this commitment to transform society and life of people."

Agrarian reform is the path to food sovereignty

Land reform was also presented by actress Letícia Sabatella as a solution to the biggest national problems. “In land reform, you work with a decentralization of power and bring a solution. People become responsible for their own livelihood. There is no need for assistance when we work on food sovereignty.”

With a soft voice, guided by radical words, Letícia defended the fight for healthy eating, for diversity in all environments, and for decolonization, and explained that food is happiness: “the better people take care of the land, the higher the quality of the food, and the greater the quality of life, reasoning, and cultural expression of a people.”

José Graziano recalled that the right to food is guaranteed by the Federal Constitution of Brazil. Even so, not everyone eats in Brazil. “Eating healthy is more expensive. In Brazil, a person who eats well needs to spend an average of R $ 11 per day. This, at the end of the month, is equivalent to 75% of the Brazilian domestic budget being spent only on food,” he says.

He points out that hunger does not happen due to lack of food (including, the waste of food increased in the pandemic), but because people no longer have money to buy the most basic, which is food. "People have lost their jobs and wages are low."

FAO estimates that when most people can choose a healthy diet, we will stop producing 75% of greenhouse gases on the planet, and health care spending will drop 97% worldwide.

In order to achieve this food sovereignty, which means health and Well Being, José Graziano defends tax reform, the reduction of tax prices on family farming, investment in research and in agroecological practices. “Embrapa, for example, works for agribusiness, and not for quality rice and beans, which we want to eat,” points out the agronomist.

To increase the consumption of healthy products, he defends the broadcast of TV and radio programs about healthy eating; the creation of free local cooking schools, maintained by the government; the return of the Food Acquisition Program (PAA), created in the Lula government in 2003, which guarantees financing to agro-ecological family producers; the taxation of products that are bad for your health (such as alcohol, soft drinks and ultra-processed products); and honest food labeling.

Then, the speaker was anthropologist Maria Emília Pacheco, former president of the National Council for Food and Nutrition Security (Consea) and today an advisor to the Federation of Bodies for Social and Educational Assistance (Fase).

During her speech, Maria Emília recalled that Consea had food sovereignty as its goal. According to her, food sovereignty is “working for the right of peoples to define their own patterns of production and consumption.”

With the scrapping of Consea, PAA and the cancellation of subsidies for agroecological agriculture, Maria Emília spoke of bringing food sovereignty combined with agroecology to the center of the debate on solutions for the country. "Society has to understand that Brazil is not the breadbasket of the world, as agribusiness announces, because hunger, the destruction of nature, the denial of the social existence of its people has no future."

João Pedro Stedile, from the national coordination of the MST, spoke about the responsibility of the peasant in the construction of food sovereignty: “our new paradigm of popular agrarian reform is linked to production in an agroecological way. The social function of peasants and agriculture is to guarantee the life and survival of the entire people.”

For him, there is no use waiting for a revolutionary government: “what we have to do is apply this new paradigm right away,” giving examples of how food sovereignty is threatened by the transport of food that is not produced locally (and, for therefore, the food has built-in costs and is more expensive).

“Can you imagine that the tomatoes that people eat in Porto Velho (RN) leave Ceagesp, in São Paulo? And that Sadia's chicken runs 3 thousand kilometers from Chapecó (SC) to Belém?,” asks Stedile.

Food sovereignty is the solution for a new post-capitalist system

Stedile ended his speech with a positive reflection: “those who are in crisis are not our ideas, but the curse of capitalism. This system no longer solves the fundamental problems of the population, such as food. Or did someone see a farmer's truck delivering food? Capitalism is what causes the environmental crisis, and only our system can confront this crisis,” he explained.

The conference ended with the speech of the ex-president of Brazil, Luís Inácio Lula da Silva, who gave an ultimatum: “either we make hunger a main political problem or we are going to live in a situation equal to or worse than that of the time of slavery in that country.”

To prioritize the problem of hunger that returned to the country, Lula said that it is necessary to analyze the experiences of the past and reformulate the strategies to add the new paradigms, and thus move towards food sovereignty.

The event ended last Thursday night (10/15) with an invitation from Jaime Amorim for everyone to talk more, in conversations between friends, about food sovereignty and its importance for the construction of a free society.

* A network of health problems, esp. ones that share common social underpinnings and cause an increased public health burden on a community. (https://medical-dictionary.thefreedictionary.com/syndemic)

Watch the conference (in Portuguese: