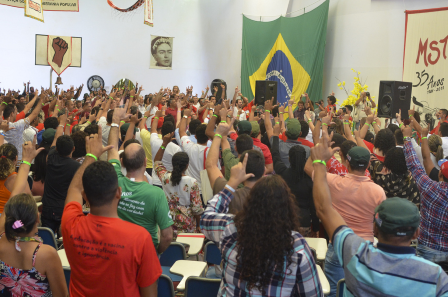 Bringing together some 400 Movement members, the political event in honor of the MST's 35 years of existence was attended by parliamentarians, representatives of popular movements, university professors and friends of the organization.

During the event, the MST launched the "Letter to the Brazilian People", addressing the Movement's position in the current Brazilian and international political situation.

Letter to the Brazilian people

The Landless Workers Movement celebrates its 35 years of struggle for agrarian reform and social justice. We were born at the end of the civil-military dictatorship, along with thousands of fighters and fighters who defended democracy and challenged authoritarianism. Once again, we reaffirm our commitment to fight for the democratization of the land, for the production of healthy food, for popular sovereignty and for an emancipated society.

Faced with the structural crisis of capital, with serious and destructive consequences for nature and humanity, our political tasks become even more urgent and necessary. The solutions presented by financial capital have nothing to do with human needs, as they result in an increase in the overexploitation of the workers, through the precariousness of work, dismantling of public policies, aggressive withdrawal of rights and diverse expropriations, brutally raising the levels of social inequality. To carry them out, capital requires an increasingly authoritarian state, aimed at repressing, raping and persecuting the poorest, promoting a cruel genocide of black youth.

This is how the media, the judiciary, the banks, the military and agribusiness have brought to power a neo-fascist and ultraliberal, a retired captain who operates in the lowest and most vulgar forms of politics, to maintain the privileges of those who historically plundered the country and directly attacked the rights of the working class, through fiscal adjustments, privatizations, and subordination of our economy to international capital, especially the United States.

The subordination of indigenous, land and environmental issues to the interests of the ruralist and agro-toxic groups in the Ministry of Agriculture; the dismantling of social security; the threat of the handover of national companies and banks, such as Petrobrás, Banco do Brasil and Caixa Econômica Federal; the freedom to own weapons are some of the deadly policies adopted by this government, which endangers our biodiversity and intensifies rural conflicts, impacting the natives, quilombolas, riverine, peasants, settlers and campesinos of Agrarian Reform and showing the anti-national and anti-popular characteristic of the current government.

It is necessary to occupy the streets and squares denouncing the greed of these policies that deepen the expropriation and capitalist exploration.

Thus, we commit ourselves to fight and defend all the workers who have their existence threatened. We will continue to defend the sovereignty of the peoples and fight against any type of political interference and / or military interventionism in any country. We declare total solidarity with the Venezuelan people!

We express our solidarity with the families affected by the Brumadinho Dam, victims of another criminal and recidivist action by Vale, a murderer protected by the judiciary.

We will join the mobilization of working women on March 8, we will be custodians of the legacy and the memory of Marielle Franco and of so many other men and women comrades who have fallen, demanding the punishment of the murderers and those who ordered the murders. We will defend the freedom of comrade Lula, who was made a political prisoner in order for this project to be victorious in the elections.

We pledge to strengthen the Popular Brazil Front and all initiatives of working class struggle that confront exploitation, subordination and oppression, joining the daily struggle of women, the urban and peasant population, Blacks, indigenous peoples and LGBT people.

We will fight for democracy, justice, equality, the defense of our natural resources, the democratization of the land and the production of healthy food to feed the Brazilian people.

National Coordination of the MST