National Free Lula March makes history in the defense of the rights of the people. 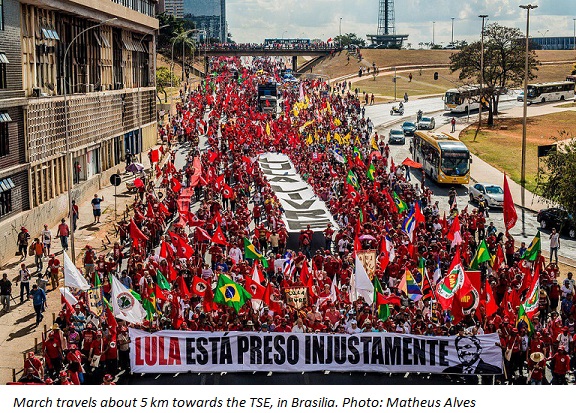 Brazil is experiencing a historic moment. More than 50,000 workers, organized in various popular movements, unions and leftist parties joined the National Free Lula March, organized by the MST, on Wednesday (August 15), to carry out the collective registration of the candidacy of the former president Lula in the Superior Electoral Court (TSE), in Brasília.

In addition, they have opposed privatization, the scrapping of public bodies and the various anti-popular incursions of the Temer government.

A crowd dressed in red walked about 5 km, leaving the vicinity of the Nilson Nelson Gymnasium, located next to the Monumental Axis, towards the TSE. Cries of order, giant banners, flags, shirts, Lula masks, posters and the words of the electric trio, who led the march, affirmed that "Lula is innocent", "Lula President" and "Temer Out."

Already in front of the TSE, a great Political Act reaffirmed the candidacy of Lula. Gleisi Hoffmann, president of the Workers' Party (PT), said that this walk is for the rights of the people. "Lula is a political prisoner, the greatest political leader in the country. The registration of this application is a victory for us. We will enter the TSE and we will register Lula and when we leave we will celebrate the victory of having Lula president of Brazil," she commented.

Gilmar Mauro, representative of Via Campesina, was one of the marchers of the Free Lula March. During the action, he says that this demonstration is carried out not because it is beautiful, but rather to resume democracy in the country, from the record of the candidacy of the former president. 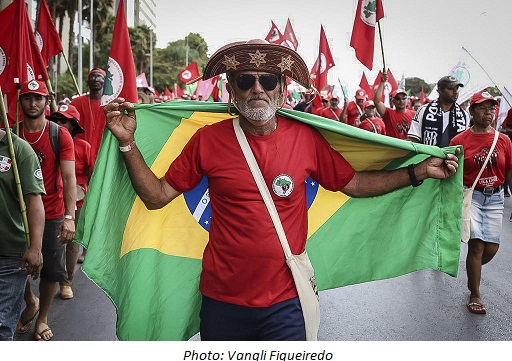 "At other times in history we marched for Agrarian Reform and are sure that we will continue marching and occupying latifundio in Brazil to denounce the coup, the withdrawal of rights. We understand that political struggle is part of this process of resistance [...]. The campaign is important. Registration is important. But, it is fundamental, after this action, to continue organizing our people," he said.

It was a five-day walk with the participation of workers from 22 states in the Federal District, and 1,200 were involved in various work teams, such as health, cooking, communication, infrastructure, secretariat, transportation, children's playground.

More than 1,600 young people participated in the march and had as one of their tasks to use art and culture as instruments of agitation and propaganda in defense of Lula Livre. In addition, they distributed more than 400 thousand newspapers, with the aim of dialoguing with people through which the march passed.

Several activities were also carried out during the course of the march, among them the donation of 4 tons of food and Cultural Political Acts. 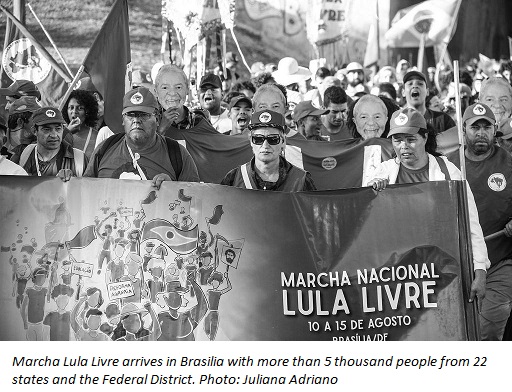 For João Paulo, of the national directorate of the MST, the March has an important symbolism, because it combines movements of the countryside and the city from a political cause. "This march has a political content that is the Free Lula and the numbers of our balance can point out the advances that we had in the organization of the people in struggle."

He believes that the next steps are directly linked to the challenges posed in the 2018 elections. "We need to defend Lula's candidacy, in the polls, in politics and in justice. We will have 60 days of battle until the 7th,” emphasized the Landless leader.