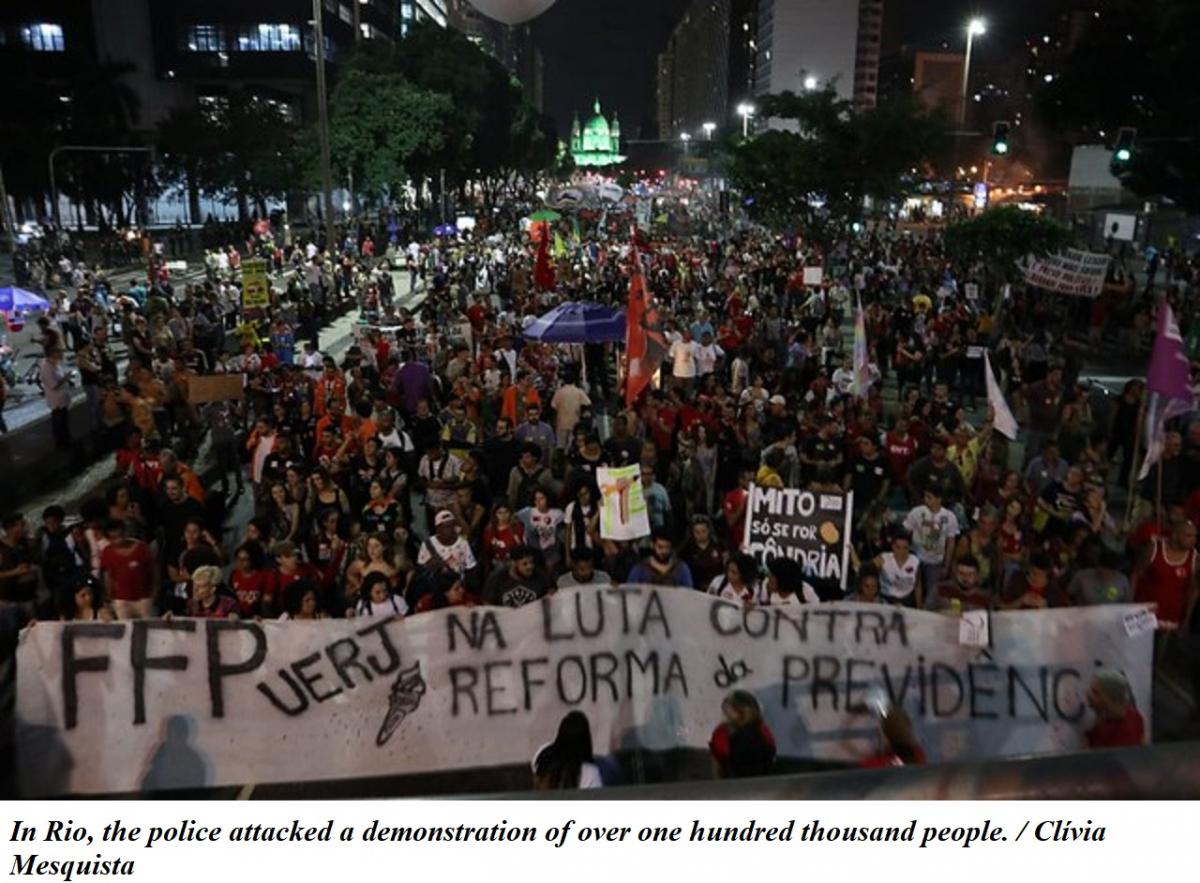 The streets answered with a resounding “no” to Jair Bolsonaro’s proposition of pension reform, to his intentions of restraining rights, and to the continuity of attacks against the people that have been happening since Michel Temer’s coup d’etat in 2016.

Throughout the day, the protests, summoned as a General Strike by national union organizations, gathered millions of people in 360 cities from north to south, in all of the 27 states.

In the capitals and major cities, the transport unions adherence to the general strike – affecting subway, urban train e bus systems – contributed to engaging masses of people in the discussions surrounding the General Strike.

This Friday’s General Strike (14), is a development of the unified struggle from the national unions, popular movements and progressive sectors that fight for public education and against the pension reform. The great demonstrations of May 1st [Labour Day], and 15M and 30M, where also built upon the union of democratic forces.

By this morning’s end, protests were registered in over 300 cities, in all states. By the end of the afternoon, the Central Única dos Trabalhadores (CUT), Brazil’s largest workers organization, divulged an estimate of 45 million workers having participated or being affected by protests and stoppages in the workplace.

Out of 27 capitals, 19 had their public transportation systems affected by the mobilization. The remaining eight capitals didn’t experienced stoppages, but many street and road blockades took place, as well as partial stoppages on subways.

“To destroy our pensions system in favor of capitalization, to sell us to the banks is what this administration wants. The unions will not discuss attacks on our rights. We want a social security system that is comprehensive, public and universal”, said Vagner Freitas, CUT’s president.

Some General Strike demonstrations were heavily repressed by the police in some cities.

In São Paulo, a protest, lead by students, teachers and faculty staff, was disbanded by rubber bullets and bombs launched by the police. Some people were hit by shrapnel and taken to the University’s Hospital. 15 protesters were taken to the precinct without any alleged reason.

At night, at the main demonstration, a huge number of police officers accompanied the protest at Avenida Paulista, in the heart of the city and attacked the protesters with gas and bombs. The same procedure also was seen at Rio de Janeiro’s demonstration.

In Araucária, Paraná, the municipal guard attacked with rubber bullets the worker’s demonstration at a federal highway, in the metropolitan region of Curitiba, the state’s capital, close to the refinery President Getúlio Vargas. Three people were injured and had to be taken to a hospital. One farmer, from the Landless Workers Movement, was hit in the face by the non-lethal projectile.

At the state of Paraíba, a police officer was filmed hitting a student in the face.