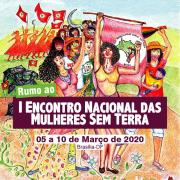 By the MST’s Gender Sector

We are able to build the year of 2020 with struggles, achievements and hopes, since 35 years ago we sowed resistance!

The year 2019 began with a mix of worry, uncertainty, and insecurity. What was really awaiting usater the election? Considering all the speeches that instigate hatred, rancor and violence against women, Lesbians, Gay, Bisexual, Transsexuals, Transvestites and Transgender (LGBT's) as well as activists from social movements in general.

What would our National Day of Struggle look like in March? How would we stand up to all setbacks? We were sure that we should be strong, mystical, beautiful as always, but we needed to be careful. However, we had an immense desire for confrontation, to mark our position against so many misunderstandings…

And so it was, we organized a month of March marked by the joy and creativity of carnival blocks, parodies and marches, with many artistic and cultural expressions in street actions, parades, with great solidarity in sharing healthy food, actions in the squares and parks, with many dialogues with fairs and stalls, but also with a lot of strength. We occupied land to denounce violence against women, such as the João de Deus farm, in Goiás, in the occupation of the train tracks to call out that VALE S / A (former Vale do Rio Doce Company - CVRD) kills and that the company of death was continuing their exploitation carrying ore, although there were still lives buried under the mud. We also reaffirmed our denunciation of the murder of Marielle Franco, former councilwoman of the Socialism and Freedom Party (PSOL / Rio de Janeiro), with the slogan “For the Life of Women, We are all Marielle!”

We are marking International Women's Day, with the need to recover the origin of this date, marked by the struggle against capital, against all forms of oppression, class, gender and race.

We continued the year building for our First National Landless Women Meeting, with a large and beautiful Circle of formation, joint activities and meetings that reached all areas from North to South of Brazil, in all states where we are organized. We involved young and old friends, country and city friends, forging and preparing many Landless women for the struggle.

Rural women challenged themselves to produce videos, write letters, poetry and music, systematize experiences, share knowledge and flavors, and organize the diversity of our production.

Parallel to this, we went on to struggle against evictions, against violence in the countryside, in defense of Agrarian Reform. We also participated in the struggles of the working class, for education, health, welfare reform, #NotHim and in defense of the environment.

It was an intense year! A time when we felt in solidarity with the Chileans, in direct confrontation against neoliberalism, with the Bolivians in resistance to the coup and with the peoples of this Latin America, attacked by US imperialism.

By rescheduling the date of our National Meeting for March of this year, continuing the groundwork, we immediately set ourselves to thinking and planning all the possibilities brought by the “aromas of March, aromas of the days of clashes and struggles”. This is the ideal month to hold our First National Landless Women Meeting, which has the motto “Women in Struggle, Sowing Resistance!”

The past year has shown us how we are able to build possibilities in adversity, resist the spread of neo-fascism, and that we need to enhance the ways of coping with the violence we are subjected to on a daily basis. A period in which we also realized that we are able to build the year of 2020 with struggles, achievements and hopes. We continue preparing for our moment of being together, because 35 years ago we sowed resistance!

Always stating that, “Without Feminism, there is no Socialism!”