Monday, March 8, 2021
Agrarian Reform
MST Occupations and Demonstrations
MST Victories
Info Source:
From the MST Page | Edited by Wesley Lima |Translated by the Friends of the MST (US) | https://mst.org.br/2021/03/08/mulheres-sem-terra-reafirmam-a-defesa-da-vida-em-15-estados-e-no-distrito-federal/

The fighting actions of March 8 also demand the vaccination of the entire Brazilian population and Out with Bolsonaro!

This year, the actions of struggle for life and against violence, carried out by the Landless Women, also denounced the death policy and setbacks of the Bolsonaro government and demanded free vaccination to the entire Brazilian population, in addition to Out with Bolsonaro.

At a time when Brazil already accounts for more than 265 thousand deaths from the Covid-19 pandemic, under the motto “Women for life sowing resistance, against hunger and violence”, Landless workers carry out actions of protest, solidarity and care with the next, in 15 states and the Federal District.

Unified actions of Landless Women with other movements and popular organizations also demanded the extension of emergency aid of R $ 600 per month(US $106) to workers who have had a reduced income or are without income, so that they are able to remain at home, in social isolation until the end of the pandemic.

Denunciation actions were carried out, such as the occupation of BR, renaming of streets with the name of women fighters, street paintings, collage of posters, political interventions, political-cultural actions, training cycles and conversations, making bands and t-shirts. As well as blood donation, food and hygiene donation, cleaning products and the distribution of lunch boxes.

As part of the National Plan “Planting Trees, Producing Healthy Foods”, started in 2019, there were also plantings of tree seedlings and the revitalization of forests. Women's actions are also added to the activities of Paulo Freire's Centenary, celebrated this year.

The activities are integrated with more than 80 organizations in the popular countryside, across the country. Due to the worsening of the pandemic, they followed the sanitary norms of mask use, social distance, gel alcohol, among others.

Check out the actions of March 8 in each state: 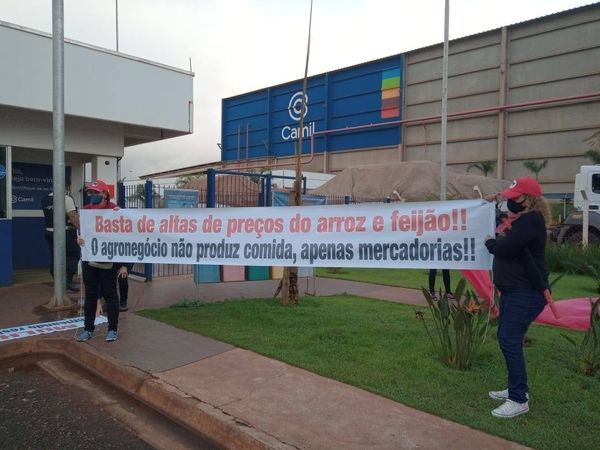 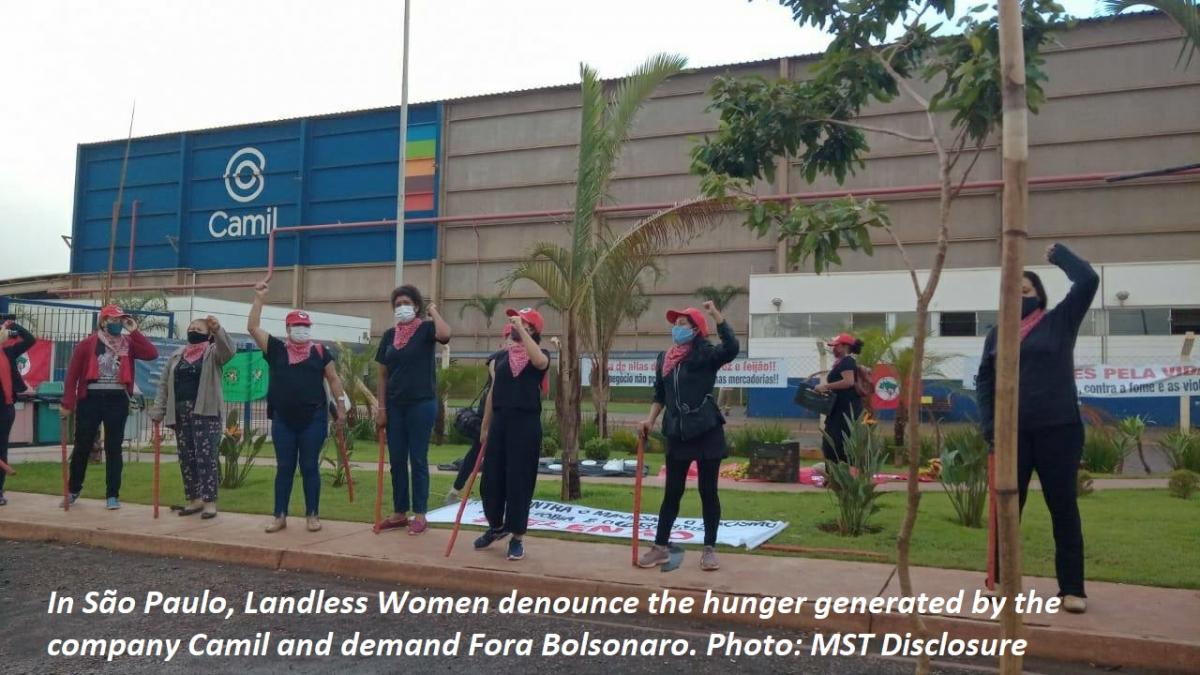 In the capital and in the interior of São Paulo, a group of women carried out a denunciation action, this Monday morning (March 8), at the two headquarters of the company Camil [a large Brazilian consumer goods corporation]. 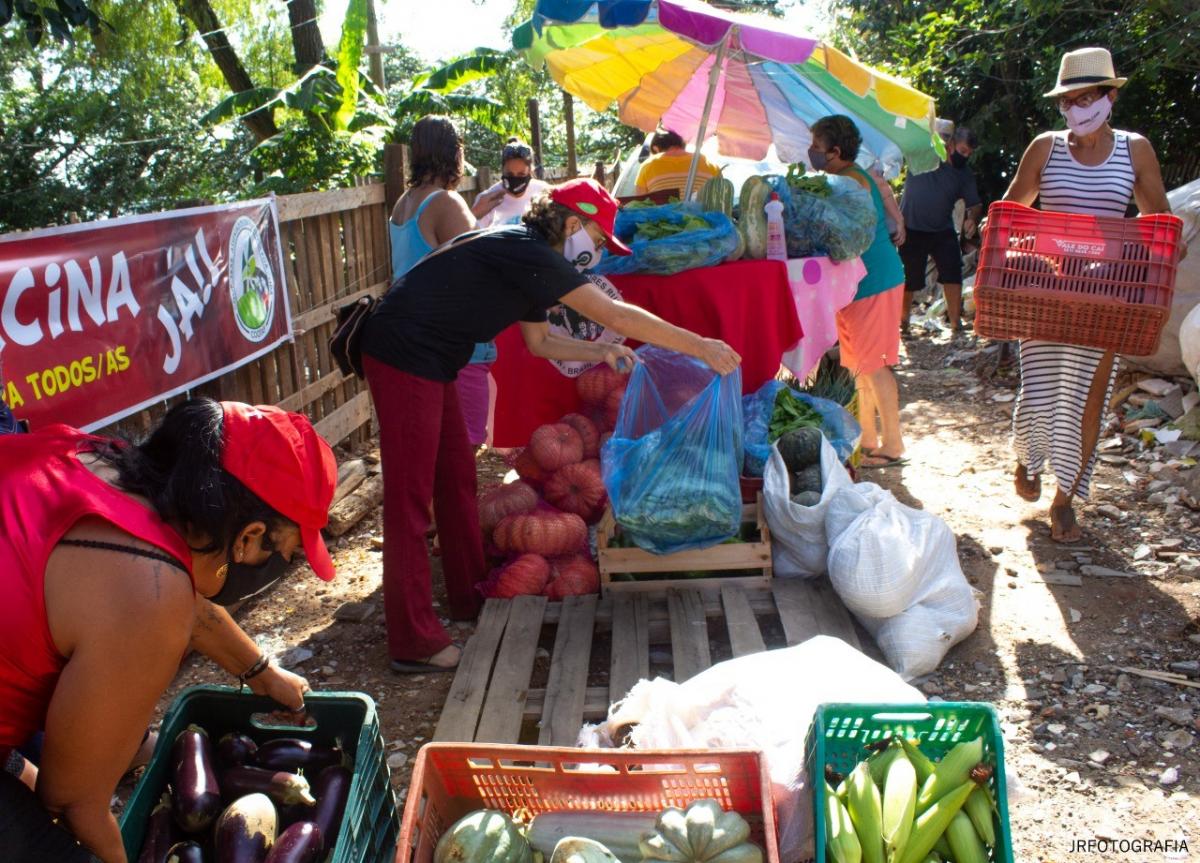 The Landless women of Santana do Livramento made the street signs more egalitarian. They paid tribute to fellow fighters from Livramento and Riveira. In the Missions region, women donated 300 kg of food to Lar Escola: Nossa Senhora Conquistadora, located in São Luiz Gonzaga. The settlers also put up banners to mark the women's struggle on the 8th. 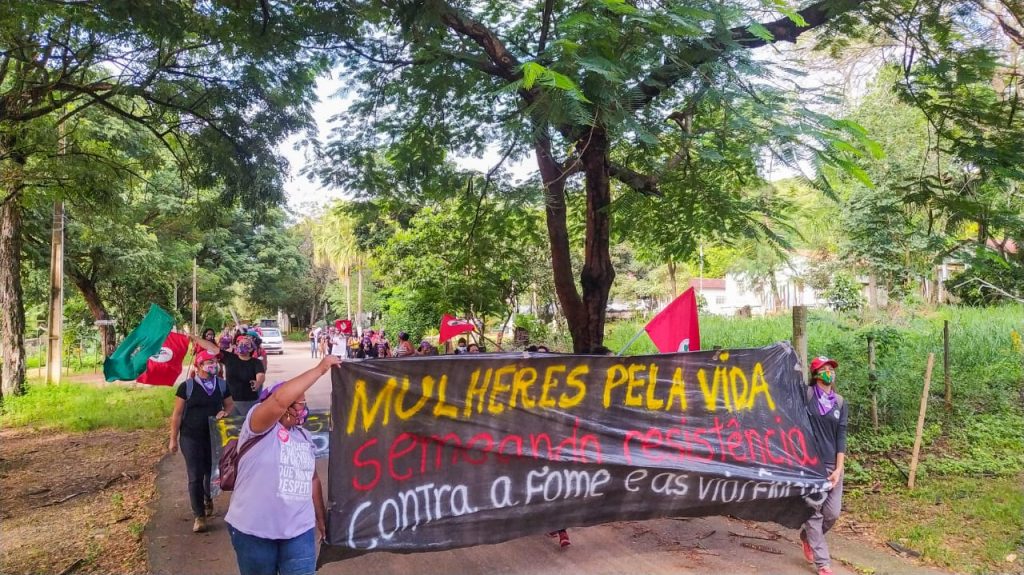 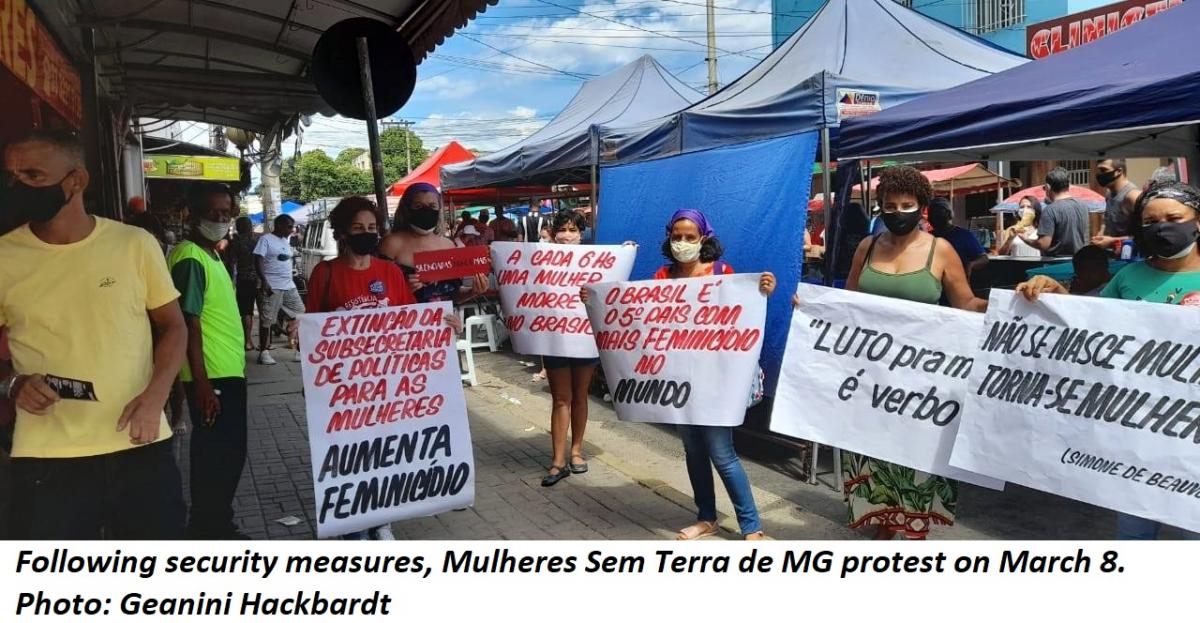 In Minas, women occupied BR 116 and demanded the opening of the regional hospital in Governador Valadares, in the Vale do Rio Doce, with the intervention of the landless women in the municipal market, together with the women of the Brasil Popular Front.

In the Zona da Mata in Minas Gerais, women donated food to vulnerable families in the municipality of Goianá. In the Mucuri Valley, a political-cultural action was carried out by the MST, together with entities and movements that act in defense of the rights of women in the region. 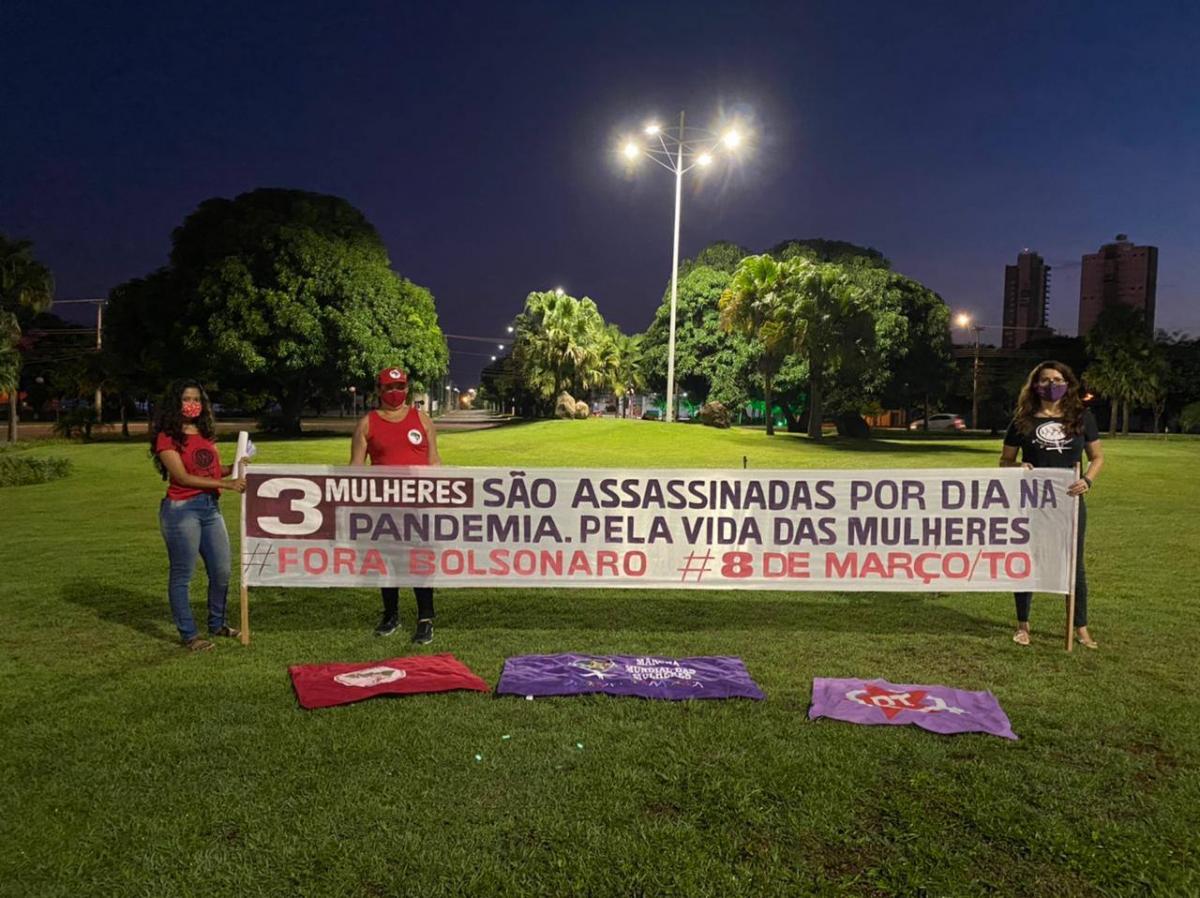 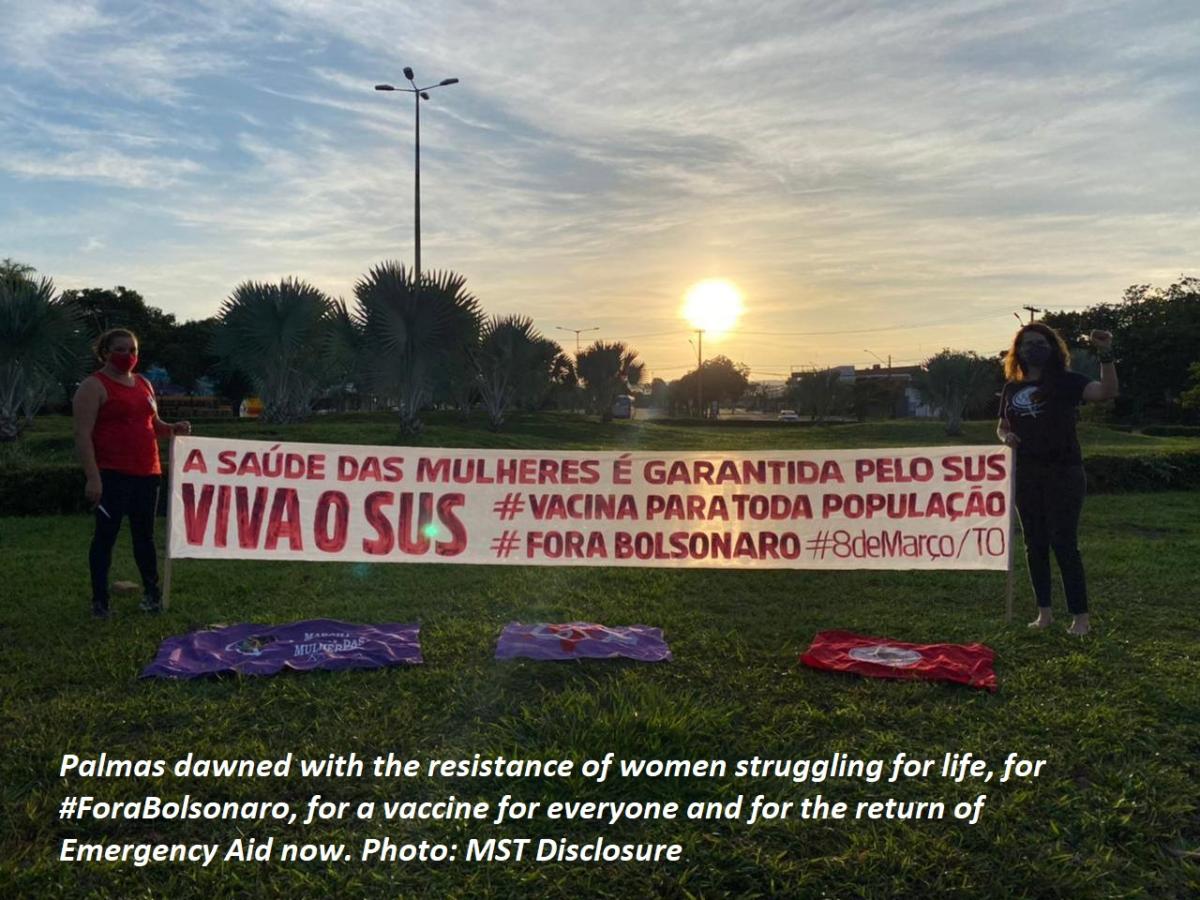 The streets of the city dawned painted with struggle on this 8th of March. The action was organized by women from the MST, the World March of Women (MMM) and the Women's Collective of the Workers' Party (PT/TO). 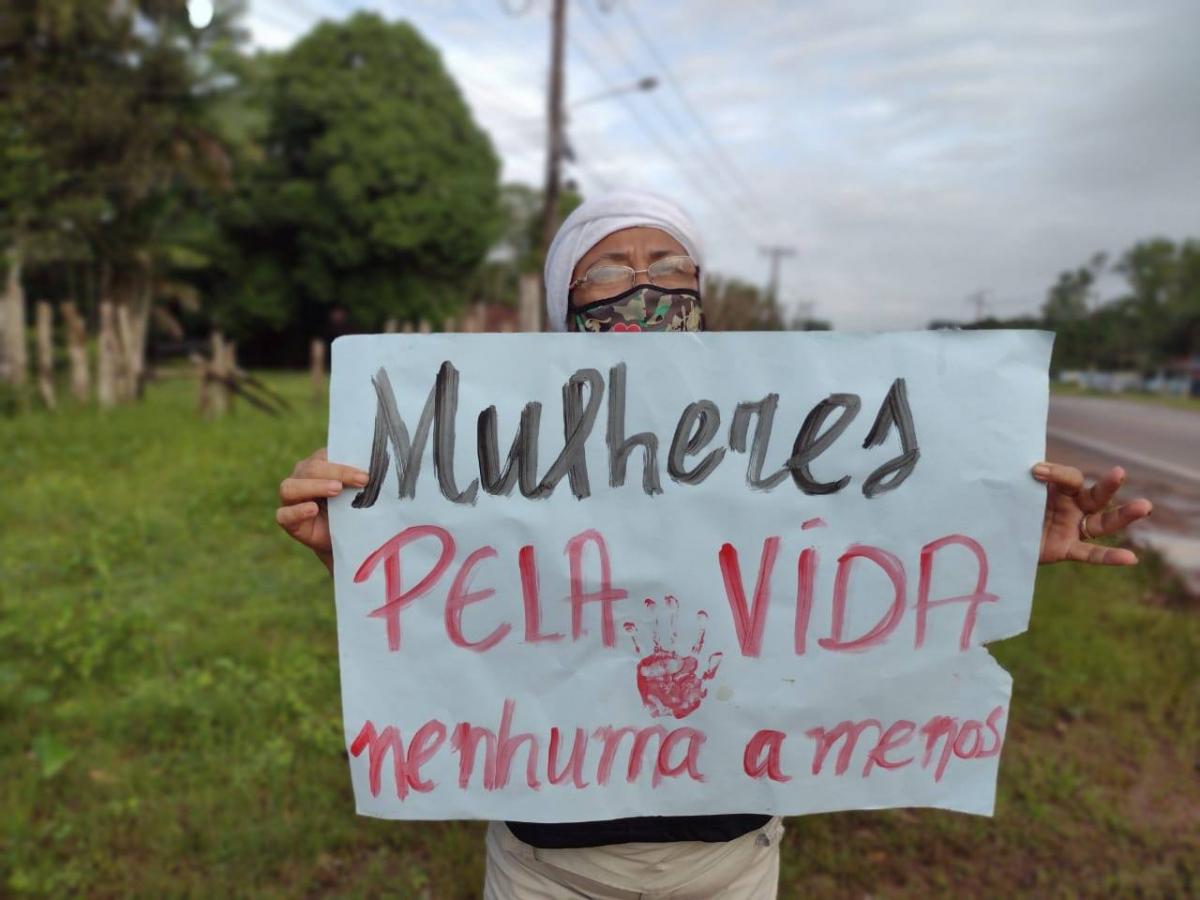 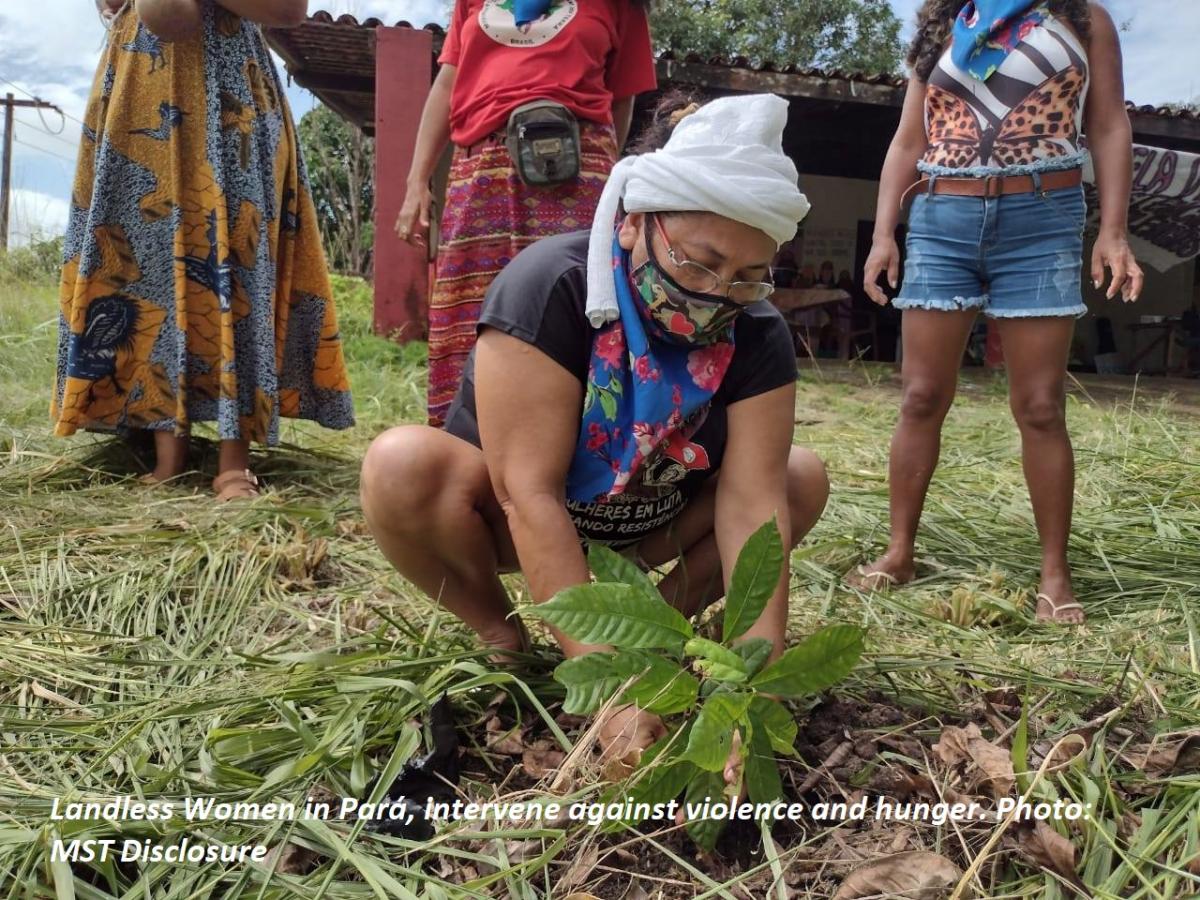 This morning at the Terra Cabana encampment, in the municipality of Benevides (PA), an intervention was carried out denouncing all forms of violence against women. Right after the action, there was a collective coffee and a potpourri of  Amazonian herbs, followed by a conversation circle. At the end of the activity, fruit tree seedlings were planted as part of the National Tree Planting Plan of the MST. 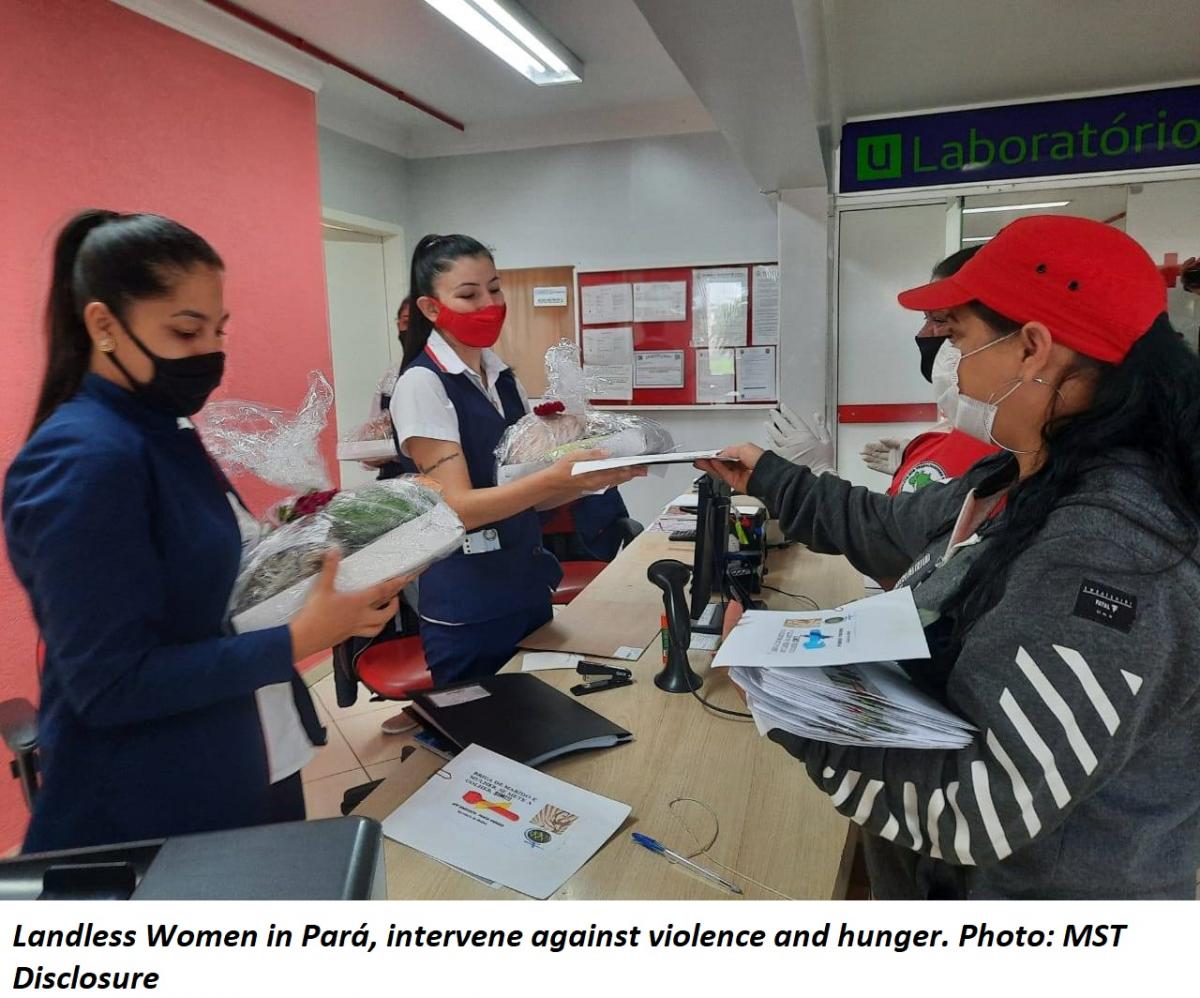 In Paraná, the peasant women from the Maria Rosa do Contestado, Padre Roque Zimmermann and Emiliano Zapata encampments delivered 165 baskets of agro-ecological food to health professionals at the Cruz Vermelha hospital in the municipality of Castro. Among the items were: homemade pasta, homemade biscuits, sweet potatoes, chopped cabbage, cassava, green corn, chives, pumpkin and chayote. All produced by the Landless families.

Ninety food baskets were also donated to the association of recyclable material collectors in the city of Francisco Beltrão, in the southwest of Paraná.

The action was organized in dialogue with the workers' association, and complied with all the protection measures against the coronavirus. Donations were organized by the Terra Livre and Mãe dos Pobres camps, in Clevelândia, and by the Missões settlement, by Francisco Beltrão. The Regional Women's Collective and the Regional Forum of Popular Social Organizations and Movements in the Countryside and the City of the Southwest of Paraná were also added to the action.

In Sergipe, the Landless women participated in a pasting of posters action that was carried out in the capital Aracaju.

On this March 8, the Landless Women of the Federal District and the Surrounding Region donated food to the Therapeutic Unit “Salve a Si”, located in São Sebastião. In all, more than 30 food baskets produced in Landless territories were donated to the institution, which welcomes women with chemical dependence. 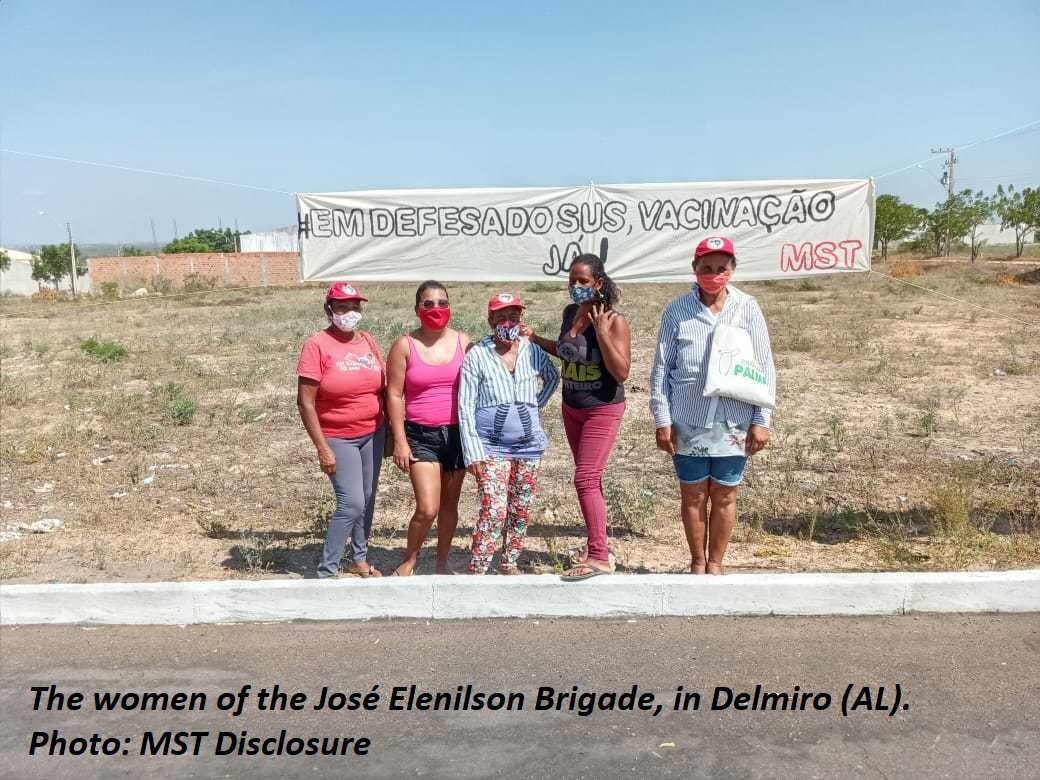 In Alagoas, a conversation circle was held by the women from the Marielle Franco encampment, in Atalaia. At the Fidel Castro settlement, in Joaquim Gomes, they made bands and shirts. In the José Elenilson brigade, in Delmiro, the peasants got together to discuss violence in times of pandemic and the role of women in the MST.

The Landless Women of Paraíba carried out a solidarity action of blood donation and planting of forests in the Hemocentros of the State of Paraíba in Campina Grande, João Pessoa, Guarabira, Itaporanga and Patos.

"Donating blood is saving lives!" From the Sertão to the Litoral, women fought for life, in defense of the SUS (Brazilian public health service), vaccine for all, for the return of Emergency Aid and Fora Bolsonaro. 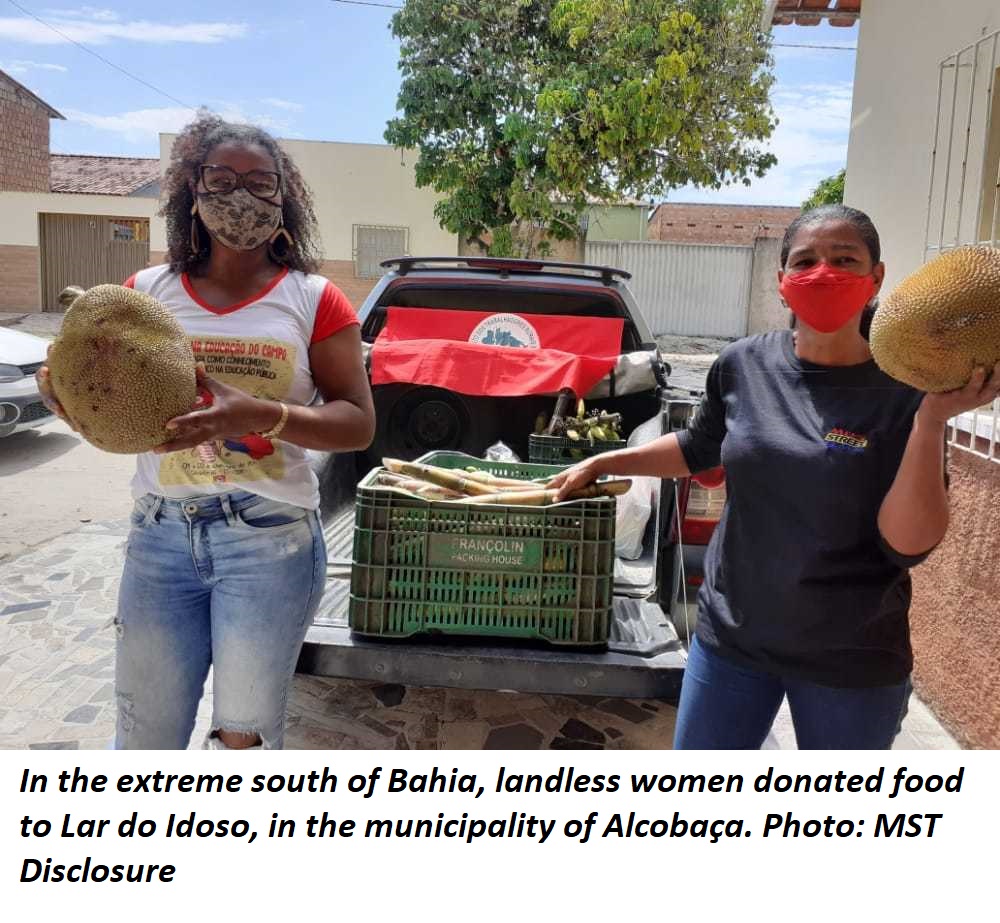 Landless Women from Hugo Chaves encampment, in Medeiros Neto, in the extreme south of Bahia, carried out an activity that discussed the need and urgency of vaccination for all and all Brazilians, the maintenance of emergency aid and the increase in food prices and poverty in the country. In addition, the Landless women of the Joaquim Ribeiro brigade made a large donation of food to Lar do Idoso in the municipality of Alcobaça. 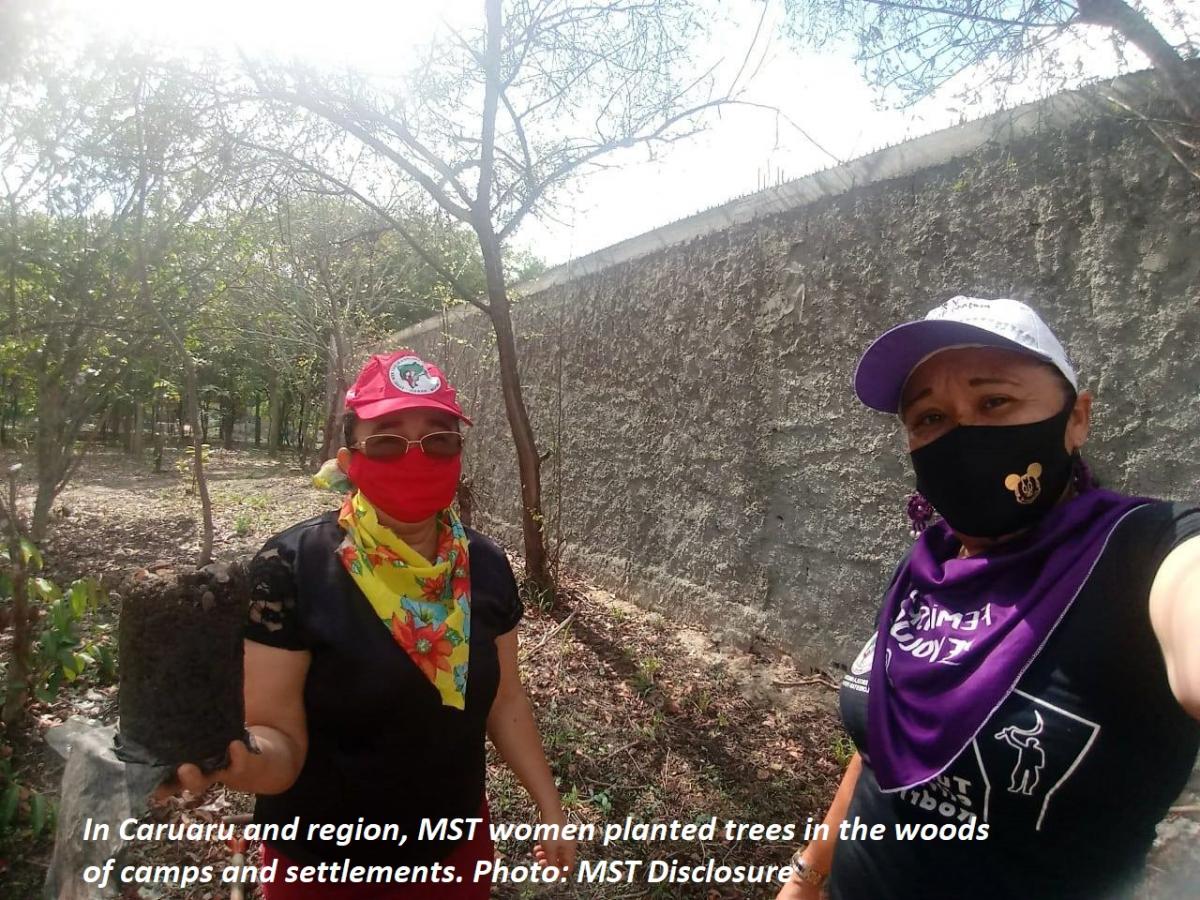 The actions in the state were carried out in partnership with the Feminist Front of Agreste de Pernambuco, which occupied the streets with banners and lambs. In the city of Caruaru, trees were planted in the woods of encampments and settlements in the region, in addition to a blood donation campaign in the city of Gravatá. In the backwoods of Itaparica, in Serra Talhada, 100 lunch boxes were donated. 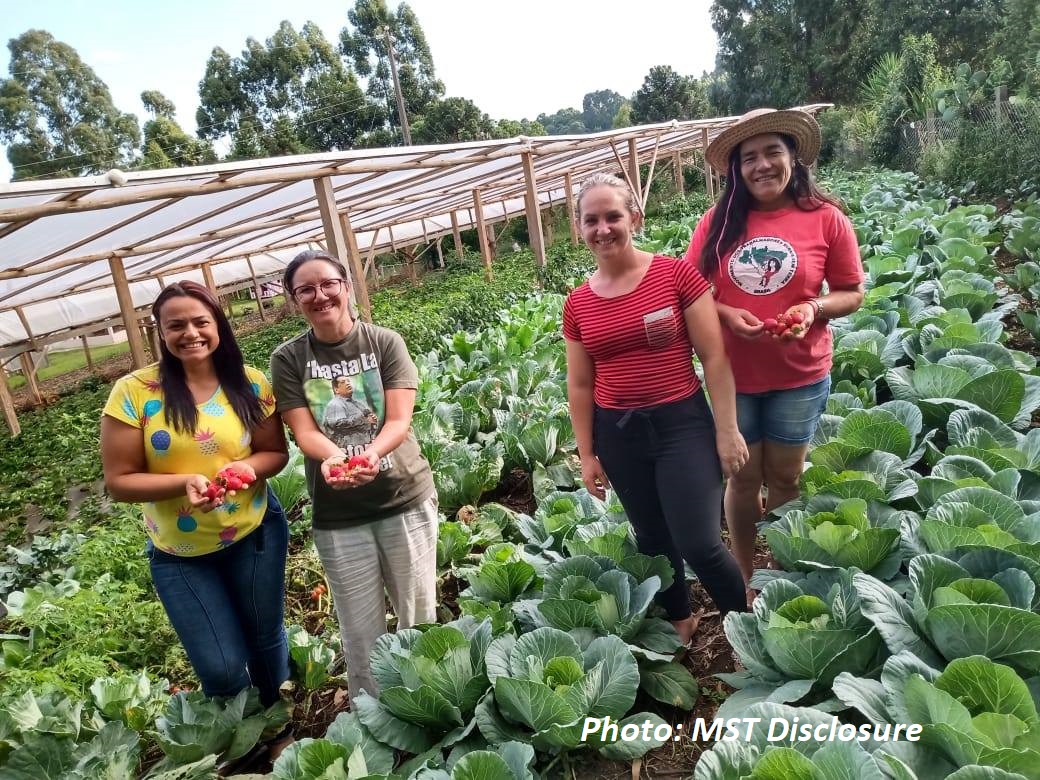 In the struggle for women's lives and for the dream of a society without oppression, on this March 8, the Landless women of Santa Catarina shared the fruit of their work and their care for life.

The Landless women of the Popular Settlement Maria Aparecida, located in the municipality of São Miguel do Gostoso (RN), held a conversation, with the historic rescue of March 8 and reinforcing the importance of the struggles for the guarantee of rights and in search of equality. Symbolic actions were also carried out, such as planting fruit trees, delivering masks and banners, denouncing violence against women, Bolsonaro's genocidal government and demanding vaccination now!

The women's struggle day began with Amanhecer Pela Vida in Rio de Janeiro. The Landless Women of the MST, with the Small Farmers Movements (MPA), the Popular Youth Uprising and the Workers and Rights Workers Movement (MTD) occupied Praça do Rio Comprido for Emergency Aid, Bolsonaro and Vaccine Now.

In Maricá, the MST participated in the inauguration of the Ana Primavesi Library, an activity of Cooperativa Cooperar. On that occasion, agroecological seedlings were also donated. Praça Agroecológica, in the city center, was decorated with banners and posters with the message of women: “Without feminism, there is no agroecology!”