In memory of an activist who was killed in the struggle - Luis Ferreira lives! 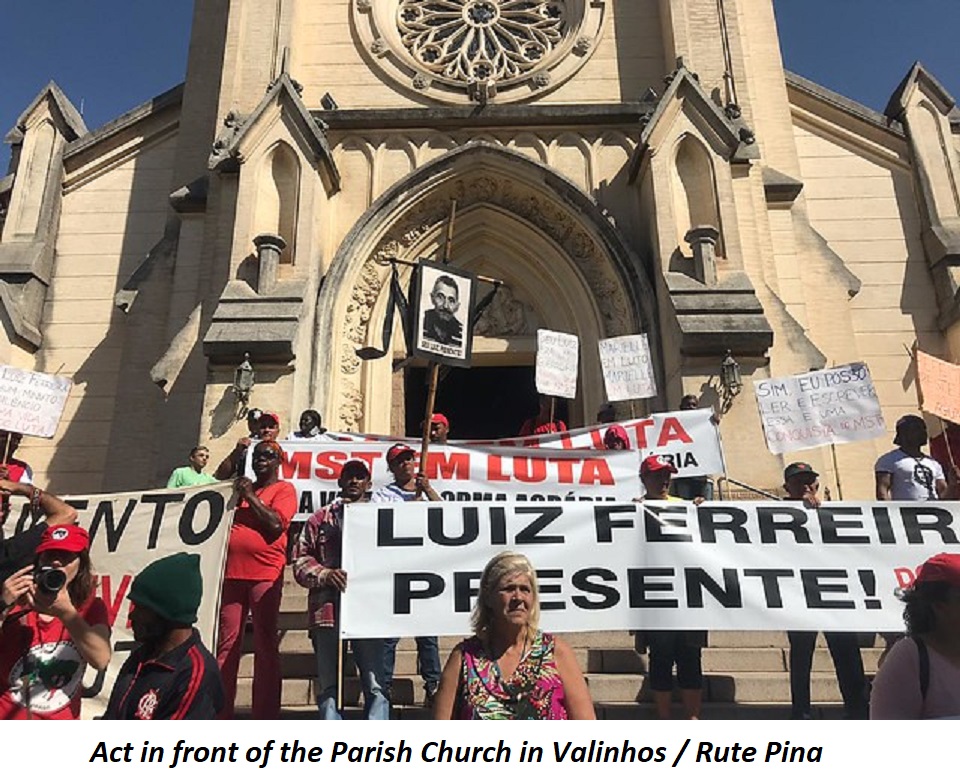 On the morning of the 18th of July, the families living in the Marielle Lives encampment in Valinhos, Sao Paulo got up quickly because very early that day they were to have an assembly that bristled with a fighting spirit.  The coordinating group had alerted people to sleep with their boots on and so expectations were high for everyone especially for Luis Ferreira da Costa who never missed an activity.

The assembly was beautiful and very animated, with lots of steaming hot coffee that had been brewed right there in the collective kitchen.  After a few songs came the deciding moment for a collective decision: they would not remain with arms crossed dying of thirst! That day was a day to struggle! Struggle for water! Struggle for land!

The agreement was to go to the road to Jequitibá, that is right in front of the entrance to the encampment, and there they would talk to people passing by and distribute flyers, seeds and some of the products they had harvested form their fields since they had occupied this land 1 year and three months earlier. Feet on the ground, excited people flyers in hand - the first few cars did stop.  They gave out the flyers, and seeds, corn on the cob, squash and okra were shared.  Priscilla, Marielle, Adalberto, Luis and all the people felt good because those who stopped seemed to understand their struggle and that their cause was just , urgent and necessary.

The sky was clear the sun shown on the movement’s flags.  The hot asphalt absorbed the footsteps of determined people stepping quickly.  Suddenly, a black pick-up truck broke through the line of stopped cars and went forward in the opposite lane and then slowed down in front of the people gathered there and then did what no one had even imagined.  The hands of the man in control of that 3-ton machine were firmly planted on the steering wheel and then shifted into low gear. The truck plowed forward running over the protesters and then drove away at high speed.  There were various injured people lying on the ground, among those were the Filmmaker Carlos Felipe and Luis Ferreira, who was fatally wounded.

Cries, desperation, running around fear and indignations.  Mr. Luis fallen, lying on the ground so close to the promised land of his dreams. A life interrupted, the assassin Leo Ribeiro was arrested a few hours later. A hate crime motivated by the loud discourse of the extreme right wing that is in power.  The cut down Luis a 72 year-old man who was still full of plans.  Pain that rips apart the hearts of all the MST and their families who while in tears sought explanation for such brutality.

Soon a wave of solidarity began to arrive in the form of cards, letters, visits, hugs, and a lot of disposition to turn this mourning into an unstoppable struggle for justice, land and rights. This solidarity was transformed into a political commitment in a protest event that was organized in front of the town church. The life of this worker from the Northeast , a migrant  a fighter, was remembered with emotional testimonies, poetry and militant theater.

Luis Ferreira was born in Caririmirim – today called the county of Moreilândia, a poor region of the state of Pernambuco. In his city of origin, currently, 91% of residents are socially vulnerable and of the 11.238 residents, 7.842 live in extreme poverty in rural areas.

Our fighter lived for a long time in rural areas and continually migrated from: from Pernambuco to Ceará, and then to Maranhão. In 1999 he arrived in Campinas, where he learned on his own to be a stonemason.  He worked in civil construction and was able to bring his Family to live close to him in São Paulo.

After a while he learned about the MST by attending community meetings. In April of 2018 he set up his shack as part of the occupation of the Marielle Vive! encampment, finally getting close to his dream of gaining land and being able to build a good house for his family.   He was the father of 9 children, had 16 grandchildren and three great grandchildren.

In the encampment, as a member of the infrastructure team, he participated in all the collective work groups in shared spaces of the camp. He built the school, bathrooms, pantry, storage shed, and created gardens where he saw his life blossoming alongside his comrades.

He was an assiduous student in the Adult and Youth Education program and was almost finished with his initial studies in adult literacy, motivated by his dream of getting a driver’s license.   He learned to read and write and analyze his reality through the educational process inspired by Paulo Freire and the Cuban methodology form their “Yes I can!” adult education program.

We buried Mr. Luis, yet another landless worker killed in the struggle.  We do not want to have to bury anyone else in this way. During the funeral, Mrs. Cicera, and educator of the Adult and Youth Education program brought his certificate of completion to the service.  All those present witnessed the graduation of a worker whose diploma was attached to his coffin, along with the flag of the Santos soccer team and the flag of the MST, through which he had come to the land in a reconnection with the origins of his life story that had been marked by so many exoduses.

The assassin was arrested almost 9 hours after his crime.  Leo Ribeiro, 64 years old, is a salesman who showed off many hate messages, and forwarded many messages of support for president Bolsonaro in his social media accounts.

The connection between the conservative political climate in the country and the absurd actions of this salesman are evident. At the same time, it is important to point out that regardless of the motivation, one who commits a crime must respond for his or her actions and that those who are whipping up hate form their high perches in positions of power will not climb down to save anyone.  Brazilian society must purge itself of these manifestations of authoritarianism and prejudice with a fascist bent that are keeping us form being more humane and more capable of solidarity.

Léo Ribeiro must pay for his crime.  We are on top of this; mobilizing an international network of solidarity to demand that this crime not be forgotten, or fall to impunity, or stimulate more violence or more assassinations of poor people.
Mr. Luis can struggle no more, but we, who remain here, have the responsibility and commitment to fight on without vacillations and without becoming discouraged. Organizing, training, political education and struggle must be a pat of our extraordinary day to day lives.

We will not rest until the mayor’s office pays attention to the community’s rights and justified demands for water and essential human rights.  We will struggle without faltering for the Marielle Vive! Encampment to become a recognized settlement pressuring the INCRA and demanding the federal and state governments fulfill their responsibilities.

We gain strength from the words of our fighter Luis Ferreira:” I will only leave this land if I am dead” , which sadly in his case became true because of the brute force of a truck driver, inspired by fascists who have disseminated this hateful ideology..