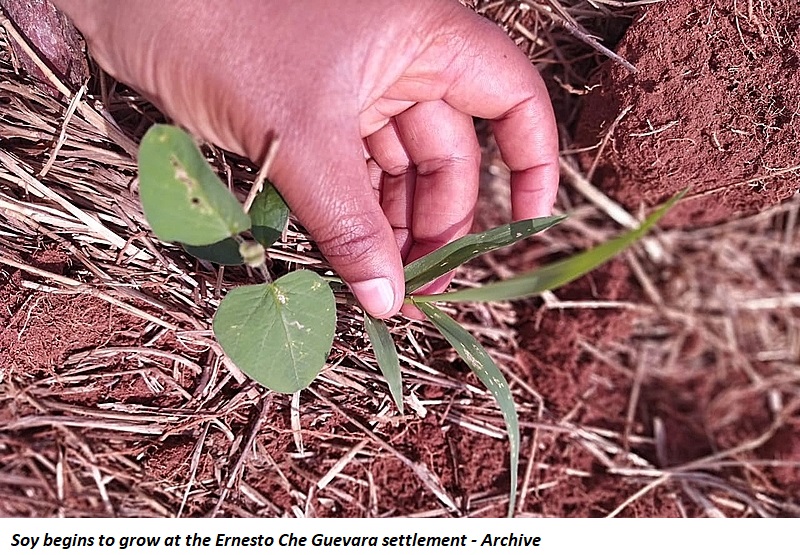 Farmers from the Ernesto Che Guevara settlement, of the Landless Rural Workers Movement (MST) in Sidrolândia, Mato Grosso do Sul, began planting 100 hectares of organic soybeans, as part of a five-year project.

The idea is to oppose the commodities agribusiness that is invading the country, especially the Midwest region, the area with the highest growth in grain production during 2020 - 6.8% compared to last year, according to data from the National Supply Company (Conab).

Planting is done by families who reside in the settlement, with technical support from the Brazilian Agricultural Research Corporation (Embrapa) in Mato Grosso do Sul. According to the MST, the goal is to expand the cultivation of organic soybeans to family farmers across the country.

To better understand the project and what organic soy means to the movement, Brasil de Fato spoke with Cleiton Valença, a member of the MST leadership in the state of Mato Grosso do Sul.

Brasil de Fato: What is the intention behind this experimental project of planting organic soybeans?

Due to the advance of agribusiness here in the state of Mato Grosso Sul, soybeans are taking over all areas of production, including in the settlements. There is an of invasion of GM soy.

Big companies come to give away their technological packages, exploiting the land, bringing poison, bringing disease into the settlements.

Given this situation, we had a debate within the MST, in the national and state production sector, and we challenged ourselves to begin planting organic soy.

Why organic soy? Because there is an entire protocol encouraging you to respect life, respect the environment and bring benefits to families. To oppose agribusiness. To prove that organic soy is viable on the market and that it can be free of poison.

There is a massive invasion of agribusiness occurring within settlements. We need to break monoculture. We will only be able to do this if we stand up and fight.

Soy is perhaps the main export symbol of large scale agribusiness. Is organic soy also a political tool in trying to change the notion that monoculture is worthwhile?

Yes, that is the intention. Today, practically, our main crop is soy. You will have a healthy diet - you have oils, you have bran. Then you will work within a certain logic. With that logic, we are standing up to agribusiness.

What kinds of food do you usually produce from soybeans, since agribusiness is generally using it only to feed animals abroad? How do you turn soy into a direct food source for the Brazilian diet?

In this first 100-hectare plantation, we partnered with an organic egg company. This will be the recipient in the first year. But we are also discussing the possibility of being able to industrialize our own from the second year onwards.

We will be able to crush the soy, get organic oil, which can go to the workers’ tables both to be eaten and to be sold. With the bran, we will feed our animals, which survive on transgenic bran – feed our pigs, our cows. It serves several purposes.

Is it possible for any farmer in Brazil to produce organic soy? Is it economically viable?

With organics, manpower is needed, weeding all our crops by hand. With genetically modified crops, since they use pesticides and roll the tractor over everything, it does not need labor. Organics on the other hand, add value to the economy within the settlement. In addition to the good prices they fetch, the inner economy of the settlement will keep moving and pay people’s wages.

And it is viable for the whole of Brazil. Let's do it in Paraná, in São Paulo. We are starting to expand to other states as well. We partnered with Embrapa. They will cede several experiments with conventional soy to produce organic soy. We will have a lot of technical and operational capacity to be able to advise other states.

What message does the MST, the settlers, want to pass on from this experience, this new way of producing soy?

I would like to say to all the settlers, not only from the MST, but all small farmers, that this project is viable for agrarian reform. We are not going to poison our settlements. We will raise our children free of poison, free of the diseases that GMOs have been causing.

It is feasible to be able to generate labor within the settlements. So that small farmers become part of this project, one with the MST’s organic grains.