On Brazil’s Independence Day, social movements staged the Shout of the Excluded nationally 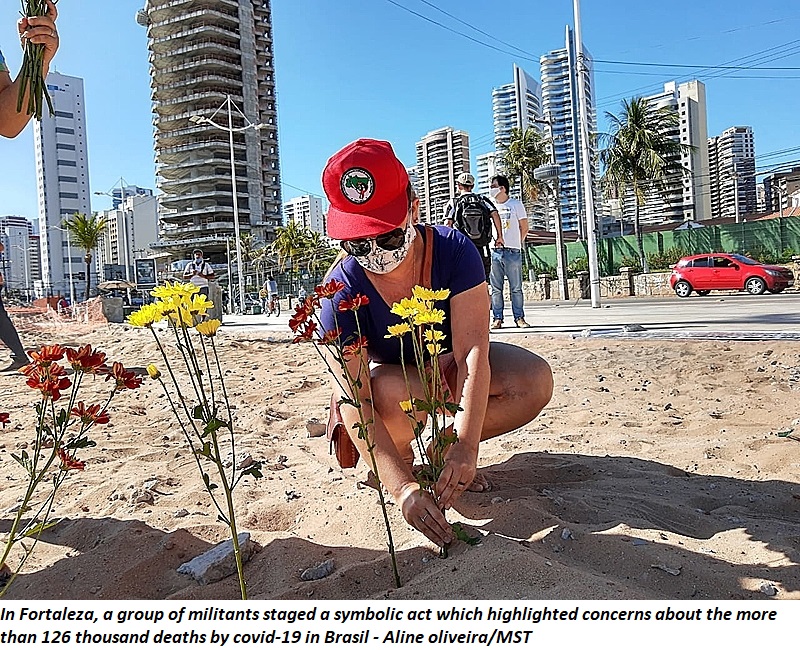 Brazil ended September 7th, its independence day, with multiple events that alluded to the Shout of the Excluded, including protests in different regions and locales. Faced with the pandemic and the need for social distancing, the traditional mobilization needed to reinvent itself in 2020, with many virtual events being held throughout the country, in addition to in person ones. Thousands took to the streets in cities like Fortaleza and the capital Brasília.

At Iracema beach in Fortaleza, a group of militants staged a symbolic act which highlighted concerns about the more than 126 thousand deaths by covid-19 in Brasil, as well as workers’ struggles for rights and social equality.

Those who took to the streets in the Federal capital opted for a performance piece to recalling violence against women, the LGBTQ community, the black and indigenous communities, among others.

The Shout of the Excluded came about in 1994 as an initiative by the National Conference of Brazilian Bishops (CNBB). The entity uses the date to serve as a counterpoint to the so-called “Shout of Independence”, as the initial declaration came to be known, and to remind us of the importance of rights being guaranteed, especially among the most vulnerable within the population. This includes the working class, women, the black community, peasants and others. This year, the event marked its 26th anniversary and brought forth the slogan “Life First”, and the motto “This system is invalid: we fight for justice, rights and freedom”.

On the heels of the latest decisions made by the government, militants from all over the country highlighted president Jair Bolsonaro’s veto to a bill that would have brought many benefits to poor rural workers.

The mobilizations also included deeds of solidarity nationwide. For example, in the city of Campina Grande, located in the state of Paraíba, the Maria Carolina de Jesus Brigade distributed 50 food baskets with the aid of a sponsor, as well as 80 protective masks and hand sanitizer that was donated by the Paraíba State University (UEPB).

In Governador Valadares, in the state of Minas Gerais, militants belonging to the Peasant Women’s Movement and the Small Farmers Movement, went from their rural areas to the city in order to donate food to the population.

In the city of Belo Horizonte, the Minas Gerais state capital, an array of organizations, political parites and social movements from the Brazil Popular Front, gathered at a city square and chanted “Bolsonaro out” and “Zema out”. The last chant refers to state governor Romeu Zema, who is furthering the neo-liberal agenda in the state.

International voices also echoed those from the national protests. Via Twitter, Venezuelan chancellor Jorge Arreaza, congratulated the Brazilian people for the protests, summoning rights to land, shelter, jobs and democracy. “From Venezuela, we express our commitment against exclusion, with peace, unity and the sovereignty of our peoples”, he added.