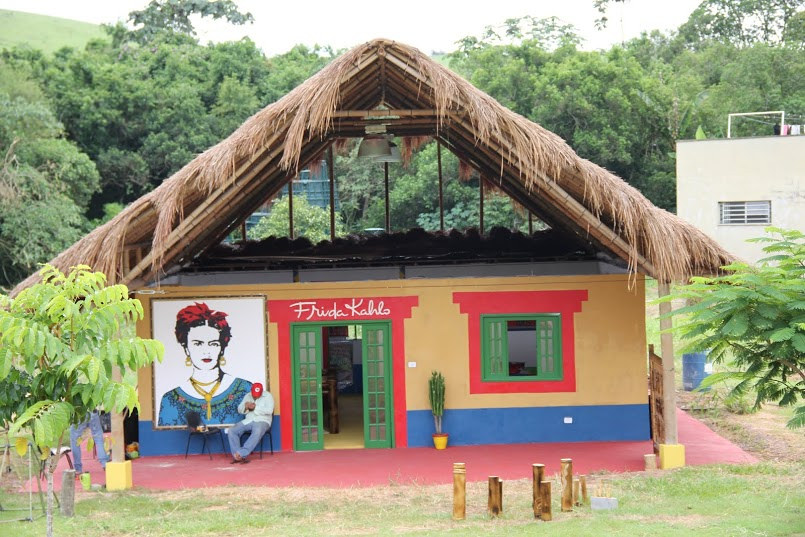 Frida Kahlo. This was the name given to the House of Arts, part of the Florestan Fernandes National School, (for MST political education) in the municipality of Guararema in São Paulo. The inauguration took place on the evening of January 21.

Magdalena Carmen Frida Kahlo, known as Frida Kahlo, communist and revolutionary, was one of the most outstanding figures in the history of Mexico. She had a life full of accomplishments and suffering, which are reflected in her works of art. She became one of the greatest painters of the century.

The architect and bio-construction expert Chico Barros, an activist who helped in building the house, comments on the house. "This house is a bio-construction, but as capitalistsl also use this term, we call it agro-ecological construction, made with elements of nature, such as bamboo and straw thatch".

For Chico, the materials and the home building process can be considered revolutionary. "Here we are making a critique of capitalism, since so many people were involved in the process of planning, preparation and implementation of this project," he said, explaining that all construction was done by working collectively, "which enriches the work, without any exploitation or alienation. "

It took ten days of work for the landless activists from the Candido Portinari National Arts Brigade and Apollonius de Carvalho Brigade - who contribute to the National School – to create the little house that could reference Frida's Blue House, which is now a museum in her honor in Mexico.

The space brings elements that resemble Frida's trajectory but also the artistic production of the landless children, youth in MST settlements or in encampments in Brazil. “With this joy, and with the spirit of Frida, we found the way and the art form with which landless people can say congratulations to the MST for their 30 years of struggle and history" said Sonia Rosendo, from the MST of Minas Gerais.

"The National School is the result of unity and volunteer work, and these processes are an integral part of our project for humanity in which we believe and the education program that we are engaged in here," said Hilary Erivan, a member of the political pedagogy coordination of the school.

During the inauguration of the house, the National Competition of Arts for Schools in Settlements and Encampments was also launched.