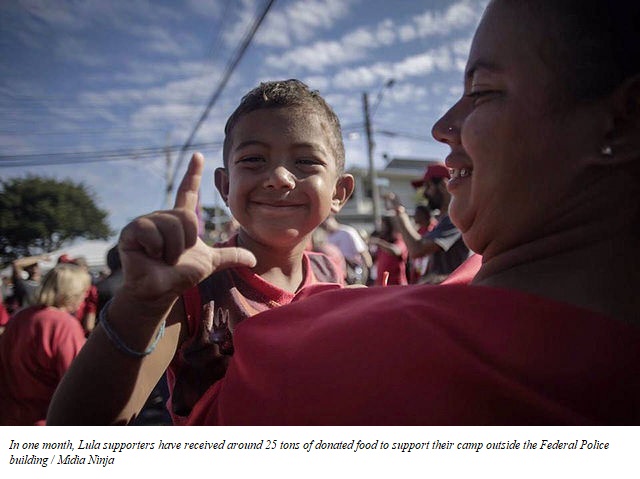 The continuous demonstration being staged outside the Federal Police headquarters in Curitiba, where Brazil’s former president Luiz Inácio Lula da Silva is being held as a political prisoner, turned one month this Wednesday May 7). Organizers and supporters feel that the outcome so far is positive and highlight the expressions of solidarity they have been witnessing.

Regina Cruz, chair of the Unified Workers Central (Central Única dos Trabalhadores – CUT) in Paraná state and a coordinator of the pro-Lula camp and the Free Lula Vigil in Curitiba, said that this resistance to the former president's arrest had actually started before April 7th. “We’ve been resisting for over a month. On the day Lula went to the [Metal Workers’] Union [in São Bernardo do Campo, São Paulo], we started to hold meetings here in Curitiba with all movements and entities that are part of the People’s Brazil Front [Frente Brasil Popular]. We didn’t sleep that first night. That was when the vigil started, then demonstrations all over Brazil, until the day we set up camp outside the Federal Police headquarters.”

On Saturday, April 7th, while people were resisting at the Metal Workers’ Union in São Bernardo, activists all over the country were also taking to the streets to protest the political imprisonment of ex-president Lula. In Curitiba, when the news break that he would turn himself in to the police and fly from São Bernardo to the city, pro-Lula supporters immediately started to set up camp in the surroundings of the Federal Police building where he would be taken to.

“That was when we consolidated our unity. That night, we organized committees and they have been working ever since. We have groups dedicated to facilities, discipline, security, programming, food,” Cruz says about the first month of resistance.

“The bombs on the first day [during a police crackdown on pro-Lula demonstrators], the R$ 500,000 fine [around US$ 140,000] imposed by the city government [for every day the camp remains standing], the order forbidding demonstrators to gather outside the Federal Police headquarters, the constant hate-motivated attacks, all these things are actually making the people who are building this space of unity and resistance stronger,” she adds.

After that first day, more than 500 buses coming from across Brazil have visited the square where a lot of the pro-Lula events are being held. The activists named the square Olga Benário, after the German-Brazilian communist activist who was killed by Nazi Germany. On May 1st, thousands of Lula supporters visited the camp and greeted the former president with “good-morning” chants, a ritual that has been repeated every day at 9 in the morning. According to the organization, more than 250 buses arrived in the city that day.

Two weeks ago, on April 25th, protesters started to keep a record of visitors, and by now more than 3,000 people have signed the book. Visitors come from Paraná state and all over the country and abroad, including Argentinian, Mexican, Ecuadorian, Colombian, Italian, French, English, American, Norwegian, and Guatemalan supporters.

Every day, politicians from all over Brazil visit the Free Lula Camp, as well as acclaimed artists such as Chico César, Inez Viana, Lucélia Santos, and Orã Figueiredo, and personalities such as renowned chefs Bela Gil and Bel Coelho, for example. While Brazilian theologian Leonardo Boff and Nobel Peace Prize laureate Adolfo Pérez Esquivel were not allowed to visit their friend Lula at the Federal Police headquarters, they did visit pro-Lula demonstrators outside the building and offered words of encouragement to those who keep resisting.

Around 1,000 people participated in the camp during the first few days after it was set up. Right now, protesters take turns, with around 300 people working to keep the camp alive.

“Every day there is someone walking up the street with a bag of rice, beans, or something else to donate to the camp. We only had to buy food on the first day. After that, we’ve been able to get by with donations, especially the ones made by the people of Curitiba and the caravan tours that are coming in,” said Marcia de Lima, a facilities coordinator at the camp. According to Lima, there have been days when they have served 1,200 to 1,400 meals.

Bruna, an activist member of the Landless Workers’ Movement (Movimento dos Trabalhadores Rurais Sem Terra – MST) who is also in charge of food at the camp, said she was very surprised by the massive number of donations. “Everyone was really concerned about the potential hostility we could face [for setting up a pro-Lula camp]. And in terms of food, we were surprised at how many donations we have been receiving. Our estimation is that we’ve received more than 25 tons of donated food [so far],” she said.

Anaterra Viana, a coordinator of the Free Lula Vigil in charge of planning their daily calendar of events, said there were actually too many artists to perform in the first few days of camp and the schedule was not enough to acommodate everyone. “Too many artists contacted us offering to perform,” she said. According to organizers, more than 200 artists have performed on the “resistance stage” so far. An all-night arts festival and a film festival in defense of democracy were also held by the pro-Lula organization.

As for upcoming events, Viana says this space of resistance has now become consolidated in the city, and some changes will be made to make it even stronger. In addition to protesting and handing out flyers all over the city against Lula’s arbitrary detention, they will also hold events dedicated to political education.

“We want to include education activities so that we can take something from this to build our political future. And also something that people coming to Curitiba can take back home and pass along. We are promoting activities for political education.”

Since the camp was set up, alternative media outlets and collectives have been organizing an extensive collaboration network to amplify their coverage. In addition to Brazilian outlets, journalists from Spain, Argentina, and others have joined the effort.

The House of Democracy (Casa da Democracia) is an outcome of this organization. It's a space near the Federal Police headquarters that has been set up through crowdfunding and now includes more than 20 media channels. An initiative by these outlets is Democracia em Rede, a live show that airs every afternoon with a special coverage of the everyday routine and news on the Free Lula Vigil.