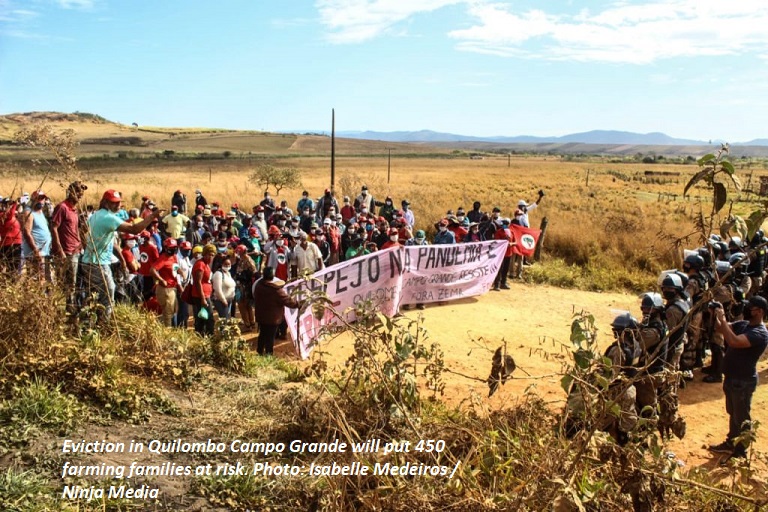 This Thursday (August 13) the Zero Eviction Campaign sent Balakrishnan Rajagopal, Special Rapporteur on Adequate Housing, a report denouncing the destruction of a school and the withdrawal of six families, in addition to the threat of eviction of 450 more Landless families at Quilombo Campo Grande encampment, in Campo do Meio (MG). In the report, the campaign articulation asks that the governor of the State of Minas Gerais, Romeu Zema (Novo) be required to implement the immediate suspension of repossession.

Determined by the Court of Justice of Minas Gerais with the endorsement of Zema, the eviction started on Wednesday (August 12) in an action that involved about 150 Military Police. After pressure from different human rights organizations and movements, the governor even declared on his Twitter account that the eviction would be suspended, but the Movement of Landless Rural Workers (MST) denounces that the police stayed overnight and remains on the spot this Thursday (August 13). Families also remain vigilant, to ensure that the Police do not destroy homes and crops. No support for families was offered by the state government.

The Quilombo Campo Grande encampment was formed 22 years ago at the site of the failed Ariadnópolis sugar mill, which is still pending numerous cases of unpaid labor rights. The farm that once benefited only one person is now the home and survival place for 450 farming families. With 40 hectares of vegetable gardens, 60 thousand native trees and 60 thousand fruit trees, the camp annually produces 510 tons of coffee without the use of pesticides, in addition to producing eight tons of honey, as well as producing cereals, vegetables, fruits, herbal medicines, milk and dairy products, as well as processed products such as sweets and jellies.

In the area, a complex of knowledge and technology in agroecology was under construction. “With this, it should be noted, the eviction of Quilombo Campo Grande is a serious violation of human rights for local families, who can lose both their home and their livelihood. This also directly impacts the food security of all the families that receive the food produced there,” point out the organizations of the Zero Evictions Campaign in the report sent.

The Zero Evictions campaign also points out that the judicial decision that supports the action is questioned, since it affects families that would not be in the process of repossession, even within the area involved in a judicial agreement. In the report, the campaign organizations also point out the severity of the eviction at a time when Minas Gerais is under the decree of public calamity. The state has 160,485 confirmed cases of COVID-19 and more than 3,783 deaths. On the eviction date, it registered 170 deaths in 24 hours - a record increase in the daily number of deaths.

The Zero Evictions Campaign - For life in the countryside and in the city was created to guarantee the right to housing for Brazilian families, especially in the time of a pandemic, but it is a permanent campaign. The initiative is made up of more than 100 popular movements, entities and social organizations.