Numbers rose in 2016 and hit record highs during Bolsonaro’s administration, according to the Pastoral Land Commission 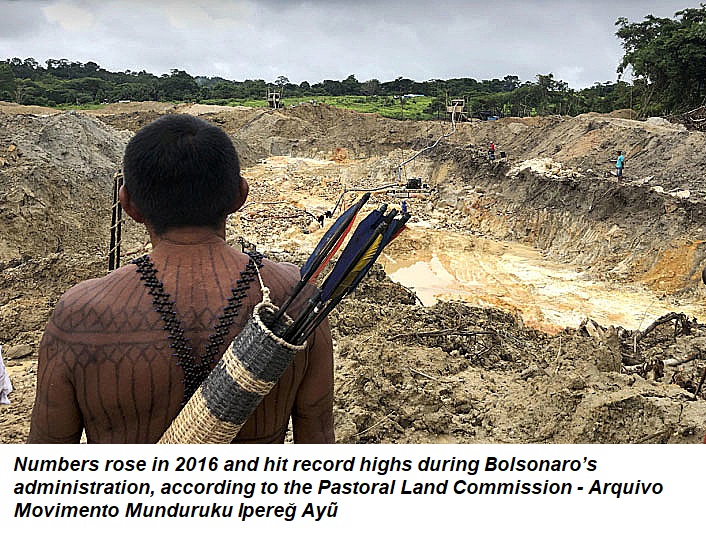 The Pastoral Land Commission (CPT) released on Monday, May 31st, a report titled “Rural conflicts in Brazil – 2020”. The document reveals a record number of territorial conflicts, land invasions and murders related to disputes over water, the highest figures ever recorded by the CPT since tracking began in 1985.

The number of occurrences increased from 1,903 in 2019 to 2,054 in 2020, involving almost 1 million people. Of this total, 1,576 incidents refer to land conflicts, which is equivalent to a daily average of 4.31 land disputes, affecting 171,625 Brazilian families, within the context of a grave pandemic.

According to CPT member Paulo César Moreira, the report aims to reveal the dimensions of the Brazilian agrarian reality.

“The fundamental objective of the report is to lay bare territorial injustice in Brazil, as well as attacks against certain communities and peoples. It also exposes the wounds that the economic and political powers that be have caused to the country. And now, during the Bolsonaro government, which has engaged in a profound denialism that withholds information from the population, we believe that this report is of inestimable importance for us and for society,” explains Moreira.

The Pastoral Land Commission reveals that the majority of occurences involving indigenous peoples took place in the Amazon region, including in territories that have been officially demarcated for years. With the narrative of “letting the herd pass”, the government consolidated the region as a new frontier for agriculture and intensified such conflicts, according to Moreira.

“90.8% of illegal deforestation is concentrated in the Amazon, in other words, we notice a constant cycle of land grabbing, deforestation, illegal fires, expulsion of communities in order to establish soybean and cattle cultivation, allowing the herd to pass through. In addition to deforestation, we must also not forget the disastrous actions of mining companies”.

Among Amazonian states, Pará stands out as a hub for conflicts and not by chance, in 2020 it was the state with the most mineral exports in all of Brazil, according to the Mineral Industries Union of Pará (Simineral).

It is precisely in the southwest of Pará that the Munduruku Indigenous Land is located, which is home to around 145 villages existing amid a complex problem of illegal gold mining on the banks of the Tapajós River.

Hailing from the Munduruku Katõ village, chief José Emiliano Kirixi denounces the advancement of gold mining that harms the well-being of indigenous peoples, riverside dwellers and other traditionalist communities.

For the chief, the invasion of indigenous lands is responsible for the increase in diseases, levels of violence, drug trafficking and access to firearms.

“If the white man wants to work with ore, then let him work on his own land. Let the natives survive on native land. Don't rent out the lives of natives, we don't accept that. Our protocol is there, being disrespected by Bolsonaro, by congressmen, senators, governors and mayors. This increases diseases, banditry, trafficking and natives don't want that, what we want is to live better lives!”.

In addition to the indigenous cause, other highlights in the report, which is produced annually by the CPT, are data points on violence against women in rural areas, the advancement of covid-19 in indigenous territories and the record number of murders in conflicts over water.

In an analysis spanning the entire last decade, it is possible to assess that the numbers start to jump from 2016, the year that the coup that removed Dilma Rousseff from the presidency and instituted Michel Temer took place. In the last two years, under Bolsonaro's government, they have reached historic records.

In 2011, 1,390 instances of conflict were recorded, a number that remained practically stable or even decreasing until 2015, when 1,329 cases were registered.

As of 2016, after the impeachment, there is an exponential jump from 1,329 cases to 1,607. If previously the difference was of around six cases compared to the previous year, that year it was 278 cases.

However, the situation became even worse in 2019, the first year of the Bolsonaro government. The number of occurrences jumps from 1,547 in 2018 to 1,903 in 2019, therefore a historical difference of 356 cases in relation to the previous year.

According to the CPT, the data points to the urgency of implementing new policies and defending agencies aimed at preventing, inspecting and combating violence in the countryside with traditional communities.