Donations, acts and live broadcasts marked the launch of the Emergency Plan for People’s Agrarian Reform

MST proposal points to way out of crises 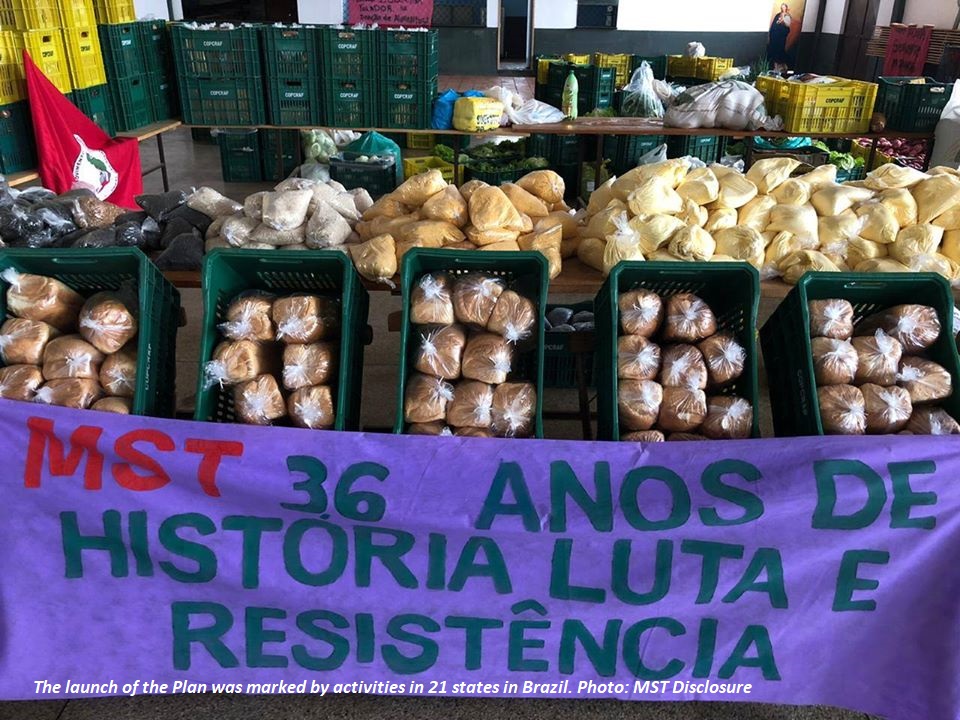 This Friday (June 5), World Environment Day, the MST launched the Emergency Plan for People’s Agrarian Reform, proposed by the Movement for Brazil with the aim of creating jobs, producing food, moving trade and guaranteeing income and decent living conditions for the people in the midst of the pandemic.

Over the course of the day, there were more than ten live broadcasts to launch the Plan on the MST networks, guided by debates and clarifications in the presence of activists and artists. The launch of the Plan was also marked by MST activities in 21 states in Brazil, with the planting of seedlings, blood donation, symbolic street acts and donations of tons of products and food without poison.

The first live broadcast to launch the Emergency Plan took place at 10 am, with the presence of Débora Nunes, from the national MST leadership in Alagoas, and Roberto Baggio, from the national MST leadership in Paraná. The live broadcast featured questions from artists such as Dira Paes, Leo Suricate, Rosana Maris, Flávio Renegado, Anna Muylaert, as well as Internet users. The athlete Joanna Maranhão and Dríade Aguiar, from Mídia Ninja, also participated in the broadcast.

Designed in the midst of the COVID-19 pandemic, the Emergency Plan for People’s Agrarian Reform is a construction of the Landless Movement and exposes the serious problem of social inequality, linked to the crisis of the capitalist system itself. In this sense, Baggio points out that the Emergency Plan is a tool to overcome the food crisis in the midst of the pandemic, since it provides for the supply of the domestic market and the guarantee of food and food without poison for the population of the countryside and the city.

“We have a structural agrarian problem. When the Europeans arrived with their agricultural model, great land ownership was born, with a monoculture model, only a few types of products, destroying the existing biodiversity. Everything that was produced went to the international market. We need to democratize the land so that it can reach the hands of farmers to produce food and generate millions of jobs,” said Baggio. 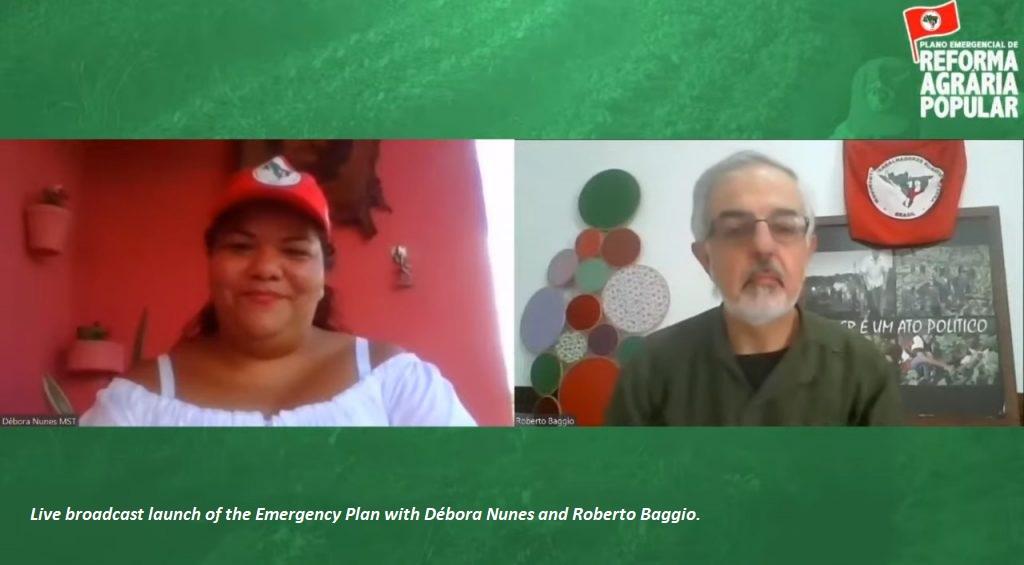 From Alagoas, Débora Nunes, from the national leadership, reinforced the Plan's objective around the theme of the environment and answered the question of singer Flávio Renegado about the role of Agrarian Reform in the preservation of biomes. “Our project requires a different form of production, different from agribusiness. It demands the preservation of waters and forests and harmonious coexistence in its different biomes.”

Since the beginning of 2020, the MST has had the National Plan “Planting Trees, Producing Healthy Foods,” with a proposal to plant 100 million trees in all states in the country in the next ten years. The planting of trees was strengthened this week by the Youth Without Land, with planting activities across the country in the Environment Week, which ends today (June 5).

The Emergency Plan is divided into four pillars. Land and Work: with a focus on democratizing access to land. Healthy Food Production: requirement for the allocation of resources to ensure PAA and PNAE during social distance and the implementation of a national agroecology plan. Decent Living Conditions in the Countryside: with the aim of ensuring that the whole family has access to education, health, work, income and housing and, finally, Protecting Nature, Water and Biodiversity: ensuring the preservation of the environment and all biomes, supporting tree planting programs and stimulating agroforestry to guarantee diversity, food abundance.

Despite the Plan's emergency nature, Roberto reinforces the objective of People’s Agrarian Reform. “We need emergency measures to guarantee food right now, but right after that, we want to face the construction of a new agricultural model. With the pandemic passing, the popular struggle on the street grows, to overcome this tragic moment of this government.”

Activities throughout the country

During the launch of the Plan, the MST carried out solidarity activities and protests against the Bolsonaro government and its measures of mismanagement across the country. Some of them:

The MST in Tocantins and the NGO Alternative for Small Agriculture in Tocantins (APA-TO) delivered 300 healthy food baskets to quilombola, rural and riverside communities, in the municipalities of the Bico do Papagaio region, such as Araguatins. In Paraná, Landless families in the North region of Cascavel donated 10 tons of food. In the Federal District (GO), agroecological baskets were distributed. 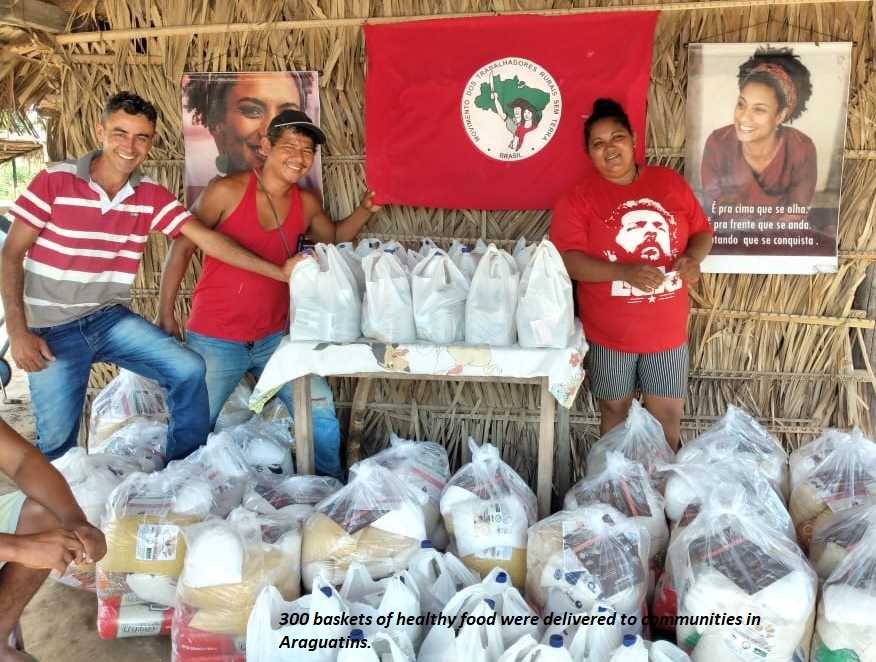 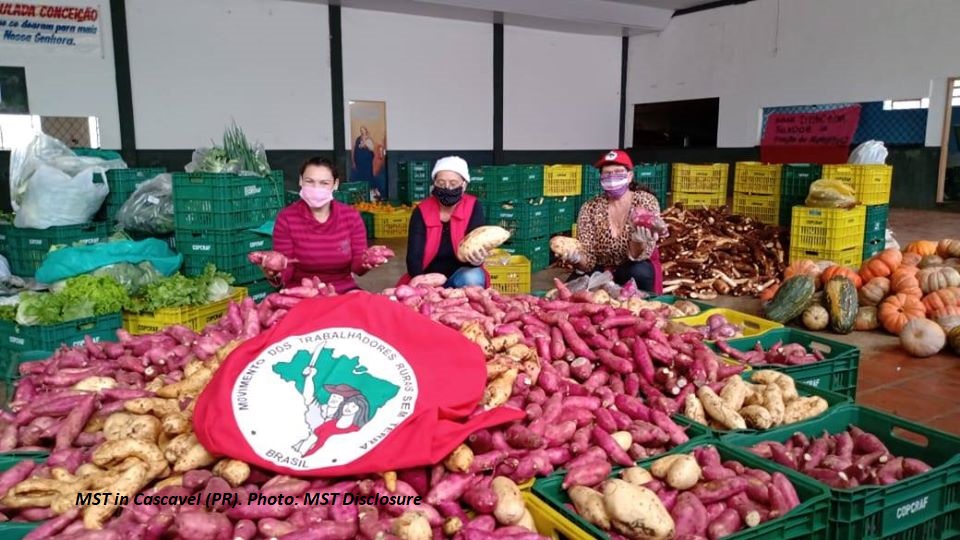 Landless of Minas Gerais carried out an act of solidarity with the donation of food from the Agrarian Reform, in the center of Belo Horizonte. The activity carried out in partnership with Coletivo Alvorada denounced Bolsonaro's death policy for the Brazilian people. Donation of food, lunch boxes and seedlings were made in other cities in the state. In Rondônia, donation of food, production and donation of masks from the Coletivo de Mulheres for indigenous peoples. 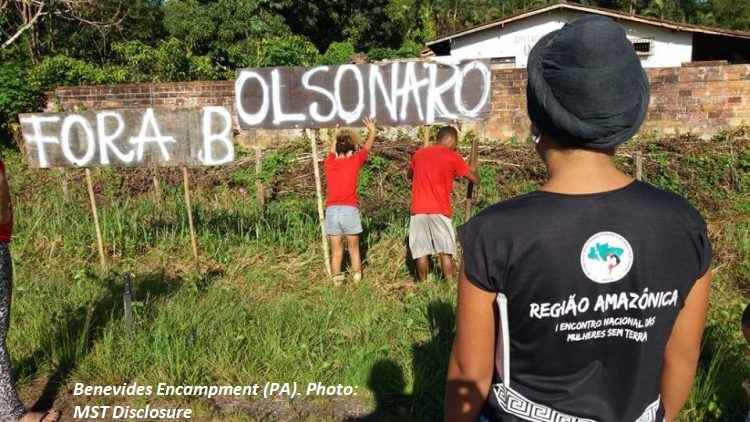 The city of Campinas (SP), dawned with the message of #ForaBolsonaro, with banners extended by the Brazil Popular Front in several places in the city. In Pará, the Terra Cabana camp, in Benevides, dawned giving the message in defense of life and the environment.