Demonstrations in Defense of Democracy Mobilize 700,000 People Across Brazil

More than 700,000 people attended the National Day in Defense of Democracy on Thursday (March 31) in several Brazilian cities. The acts were organized by Brazil Popular Front and the People Without Fear, in order to defend democracy against the coup and to fight for a different economic policy. 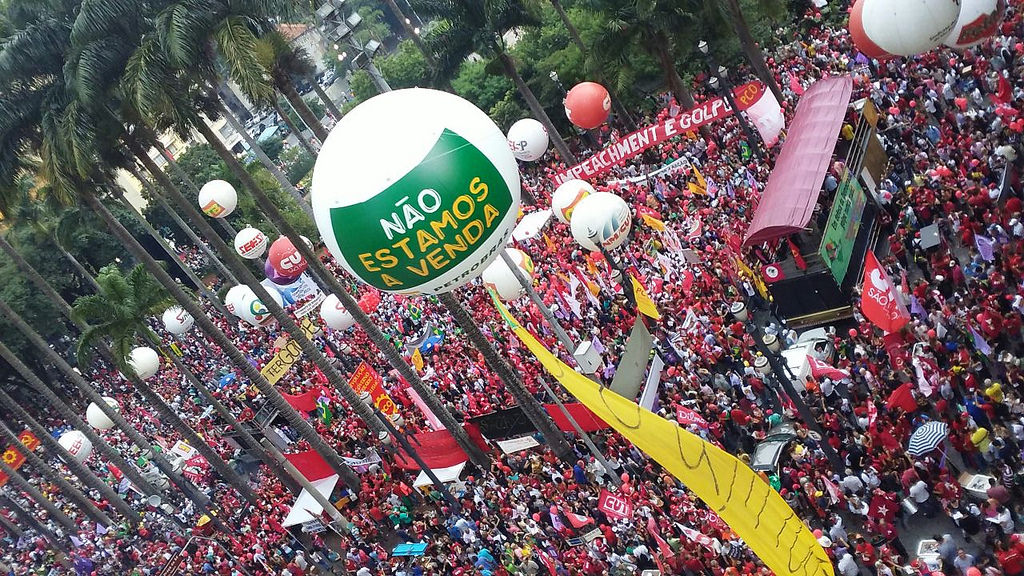 In addition to the national acts, Brazilians living in other parts of the world also demonstrated against the attempted coup in progress in Brazil. Demonstrations were recorded in Bogota (Colombia), Paris (France), Munich (Germany), Copenhagen (Denmark), Coimbra (Portugal) and Barcelona (Spain).

The demonstration of Thursday (March 31) brought together some 60,000 people in the Cathedral Square in the city center. Flags flew in the square, symbolic place for having been the scene of struggles of the movement Rights Now!, that demanded presidential elections in Brazil between 1983 and 1984. These groups among others were chanting slogans against the president of the Chamber of Deputies, Eduardo Cunha (PMDB RJ) and the judge Sergio Moro, protesters denounced the attempted coup in progress in the country, with the impeachment of president Dilma Rousseff.

With the latest political developments, such as the exit of the PMDB from the alliance with the Government, the confidence of many gathered there would be a shift of the government to the left. This was the feeling of the couple Arlete, 65, housewife, and Paulo Brota, 71, a retired banker. "She [Dilma] could no longer rule [with the PMBD in the government], I think the situation will now improve," said Brota.

They remembered the military regime that was initiated exactly 52 years - on March 31, 1964. "In 1964, I was a banker in Minas Gerais and I can say that the climate was similar, this anti-communist sentiment, for example," he said. However, he differentiates the two moments because of the large street demonstrations currently taking place against the impeachment. "That I did not see at the time. Of course, 2016 is not the same," he said. "If there really will be a coup, there will also be a lot of resistance," adds Arlete.

The actors Group 59 Theatre, Nilceia Maria Vicente, 37, says she left home against a process that, in her view, would deprive many social rights in the future. She said that she voted for Dilma in the second round of the last elections and said she is not satisfied with the President, but the question "pushed the boundaries to be partisan." "We understand that if she remains, our rights will be guaranteed," she said.

Past this turmoil, says Nilceia, the president should lead a process of political reform in the country. "We are here fighting for her and she needs to be there fighting for us too," she said.

Just like last demonstration, the participation of youth was visible. Friends Peter, 14; Lucas, 15; and Andrew, 15, appeared alone in prime neighborhoods of the West Zone. "My mother thinks very wrong. She scolds the [former President Luiz Inacio] Lula on TV (...), but [says] he helped a lot of people," said Peter. "We are against the Rede Globo, which manipulates the news and is totally partisan," André pointed out. "We are in favor of reducing inequalities, but a lot of people are against it," Lucas said.

Already, pedagogy student Barbara, 22, said the willingness to take to the streets in defense of democracy comes from her family. "My grandparents fought against the dictatorship and my mother knew she was pregnant with me shortly after a demonstration against the privatization of Banespa, where she took the blows from police batons." she said.

She said, however that she does not agree with many measures taken by the Government, that she was there for the defense of the political project that, according to her, would be a step back in case of removal of the president. Also, Barbara said she was frightened by the advance of hate speech against the Workers Party (PT), including that propagated by her students of only seven years. "I have friend who began to wear red, some teachers would only talk to me if I wasn’t wearing a red dress, the situation is very complicated," she said.

Almost at the end of the demonstration, Grupo Angola Sim Senhô made a capoeira against the coup. "The master presented his political beliefs and those who agreed came to express against the coup," said Livia, a member of the group. About 20 capoeiristas attended and sang ironically: "No, no, no, there will not be a coup .... Just capoeira!"

At least 700,000 people in more than 100 municipalities in 26 states and the Federal District, also participated in the National Day in Defense of Democracy on Thursday (March 31).

The largest demonstration took place in Brasilia (DF), with 200,000 participants. The action focused in front of the Mané Garrincha stadium and went to the National Congress. More than 750 buses from all Brazilian states went to the federal capital. 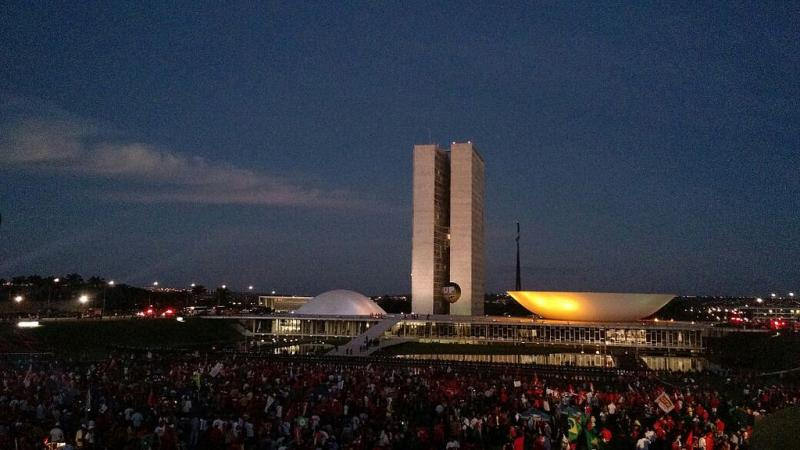 In Rio de Janeiro, about 50,000 demonstrators occupied the Largo da Carioca, in the state capital. The singer Chico Buarque was one of the artists who participated in the act for democracy in Rio. Along the thousands of protesters, he sang the song "Admirável Gado Novo." 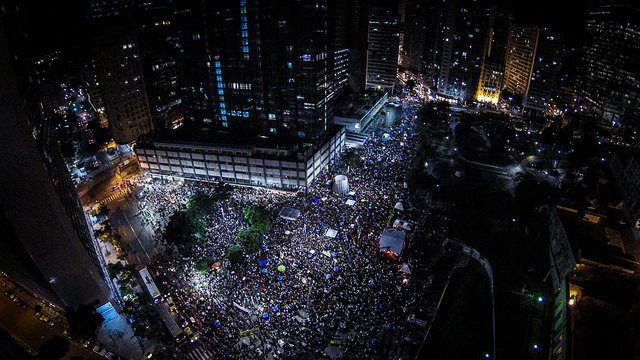 In addition to the national actions, Brazilians living in other parts of the world also demonstrate against the attempted coup in progress in Brazil. They have been recorded acts in Bogota (Colombia), Paris (France), Munich (Germany), Copenhagen (Denmark), Coimbra (Portugal) and Barcelona (Spain). 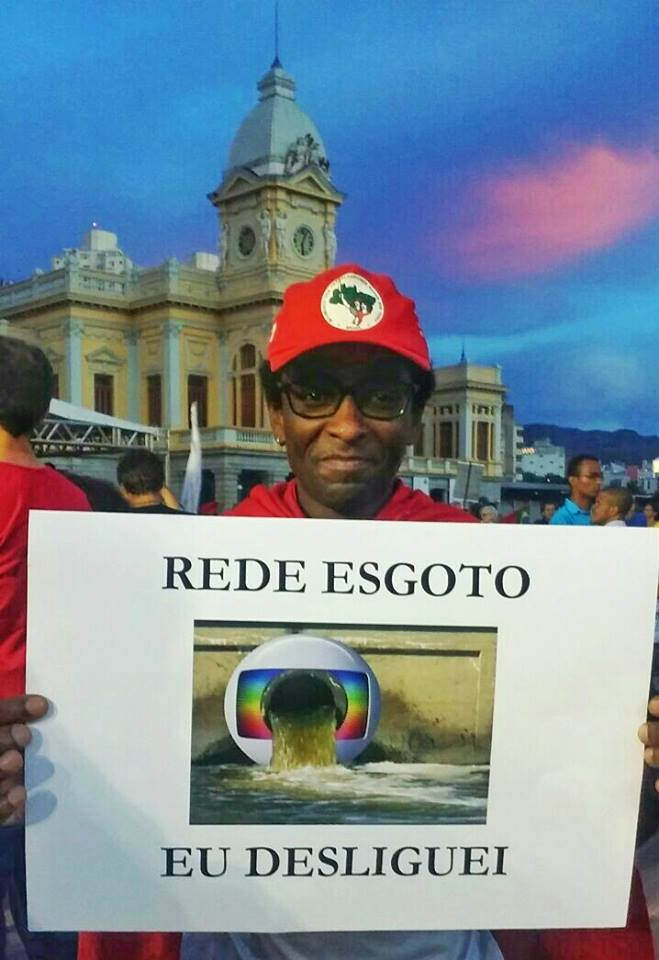 Check the status of the demonstrations:

Five thousand people were in the demonstration in Maceio, where there was a great artistic and cultural procession to defend democracy, with the popular diversity of the region. Popular movements in the countryside and the city, parties, artists and intellectuals sing with one voice in defense of the democratic rule of law.

The march through the center of Salvador began in Piedade and followed him to the Field of Gunpowder with the participation of over 30 thousand people.
Cities in the interior also organized - Araci, 50 thousand inhabitants, brought together about 500 people, and Feira de Santana, in the Bahian Recôncavo, over 3,000 employees focused on Northeast Square came marching through the city center in the afternoon.

In Fortaleza, about 50,000 people participated in the demonstration, which began in the Praça da Bandeira and went to the Dragão do Mar.

In Goiania, about 2,000 people participated in the demonstrtion, which focused on the Civic Square.

In the capital, São Luís, the organization released a thousand people attended the ralley. In the city of Imperatriz, it is estimated that 500 people have expressed their support for democracy in the Plaza de Fatima.

In Cuiabá, the scene of demonstrations against the coup was the Alencastro Square, occupied by about 400 people against the impeachment.

The concentration of the demonstration in Belém began at 16h in Praça da Leitura and by the end of the night, gathered about 30 thousand people.

In Belo Horizonte, the demonstration gathered about 40 000 in Station Square. The population of other cities such as Juiz de Fora, Montes Claros, Pocos de Caldas, São Lourenço and Varginha also participated in the demonstration.

The Action for Democracy gathered 40,000 in Recife during the afternoon of Thursday. In rural Pernambuco, popular movements, trade unions and social activists also held a mobilization against the coup.

In the town of Garanhuns, for example, the MST workers and the Federation of Agricultural Workers of Pernambuco (Fetape) and members of the Brazil Popular Front marched this morning in the city streets, in rural Pernambuco. The city of Floresta e Ouricuri were also cites of  demonstrations on Thursday morning.

In the afternoon, an action happened in Singapore and gathered about 10 thousand. In Campina Grande, about 15,000 people participated in the city center. In the city of Paraiba Cajazeiras, the demonstration convoked by Brazil Popular Front took about 1,200 people to the streets against the coup this morning. Participate in mobilizing representatives of 12 municipalities in the high backlands of Paraiba.

In Teresina, the action began with a "bandeiraço" at the intersection of Avenida Frei Serafim with Coelho de Rezende Avenue. Then there was a vigil in the St. Benedict church, with the participation of 1,000 people.

In Paraná, the major actions were in Curitiba and Cascavel, with five thousand demonstrators each. Other cities also saw demonstrations against the coup: Londrina, with over a thousand people in the streets, and Iguaçu Falls, at least 2,000 people positioning themselves against the impeachment of the President of the Republic.

In the morning in the state capital, the facade of the Institute GRPCOM belonging to the PRC (affiliate of Rede Globo in Paraná), had graffiti  with references to the 52 years since the date of the military coup.

In the capital, the organization estimates that the 20,000 people participated in the demonstration, which focused in front of the Federal Institute of Rio Grande do Norte (IFRN). Mossoro, 3,500 workers participate in demonstration for democracy.

At least a thousand people gathered in front of the Matriz Plaza in Ji-Parana to speak out for democracy in the late afternoon of Thursday. In the capital Porto Velho, the estimate of the organization was 100 people.

The actions focused on the Civic Center Square in the capital Boa Vista. The organization counted 700 participants.

Only in Porto Alegre, about 70,000 people protested at the "democratic corner" to the Zumbi dos Palmares, in the Cidade Baixa neighborhood. In the state interior, about 30,000 people demonstrated in 20 municipalities, totaling over 100,000 participants across the state. 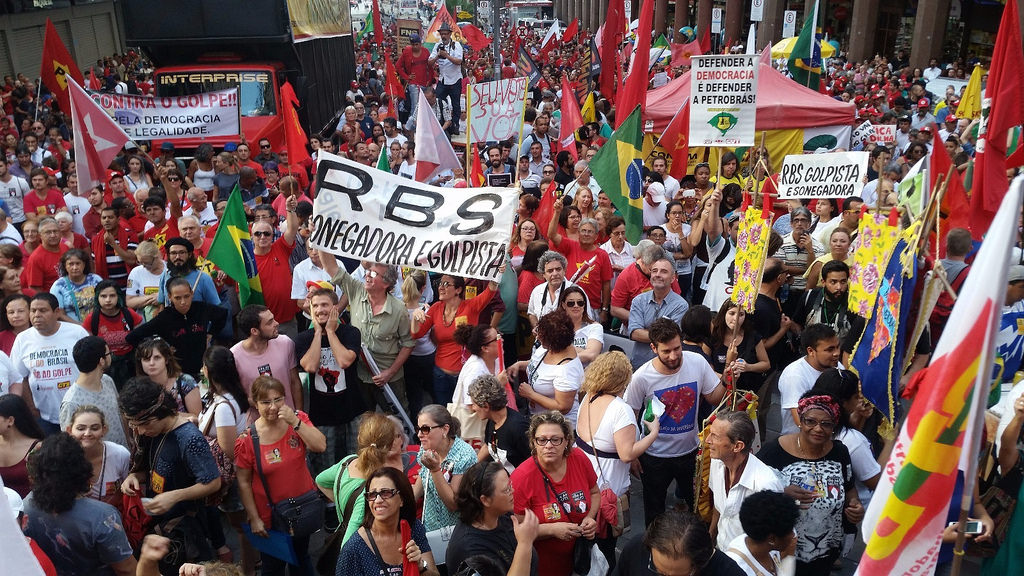 The biggest march was in the state capital Florianópolis, with about 3,000 participants. They left the bus terminal downtown and circled the city.

In addition to the state capital, the actions also happened in other locations across the state, such as Campinas, Pindamonhagaba, Ribeirão Pires and San Carlos.

In Aracaju, the event had two parts. At 15h, the activity began in Praça General Valadão, with a political ralley for the march of concentration to Orla's industrial district. The destination of the walk, around 19h, began artistic interventions under the name "Artists for Democracy".

In Palmas, 600 people participated in the demonstrations for democracy.