Among the central demands of the Cry of the Excluded were the defense of social security, the annulment of the Labor Reform and the fight against the privatizations of Eletrobras and Petrobras. 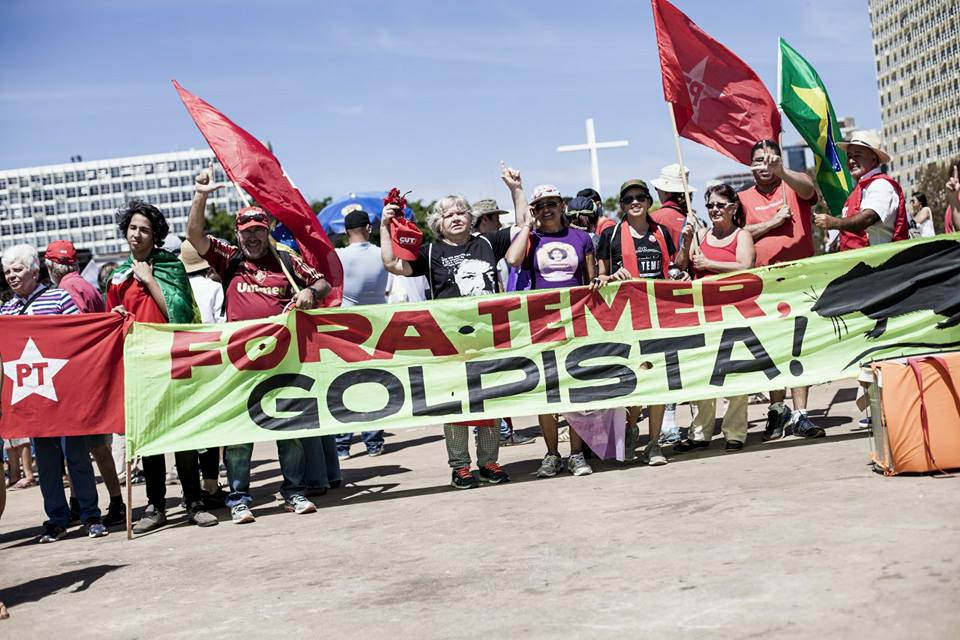 Thursday (September 7, 2017), Independence Day, was marked by yet another edition of the Cry of the Excluded in the Federal District. Organized by social pastoralists of the Brazilian National Bishops' Conference (CNBB), popular movements, civil society organizations and activists, the moment was a repudiation of the withdrawal of working class rights by the coup government of Michel Temer in Brazil.

According to Eduardo Zen, of the Popular Consultation, the celebration of the independence of the country only makes sense with sovereignty, development and the guarantee of rights and dignity for the population. "The Brazilian people repudiate and do not recognize this government that is delivering our state, our national wealth, while  taking away their rights."

The Professor of Geography and History, Katia Garcia, affirms the need to fight against social injustice in the country. "We Brazilians cannot accept what is happening, my cry is a cry of soul, we cannot allow any people to be excluded from this society, we must be together against all injustice. Out with Temer!”

From one cultural presentation to another, several organizations made statements, theatrical denunciations that led the people present in the act to reflect on current political issues.
Luís Claudio Mandela, from Cáritas Brasileira, recalled that the Grito act occurred in more than 3,000 municipalities throughout Brazil and that this 23rd edition in unity has a very important meaning in this context of withdrawal of law. "The rallying of left-wing social organizations, political parties that really want to build a Popular Project for society is necessary to build this unity." The Cry comes with the perspective, rights does not move," he says.

Among the central demands of the Cry were the defense of public welfare, the annulment of the Labor Reform and the fight against the privatizations of Eletrobras and Petrobras. In this sense, Vanderlucia de Oliveira Simplício, of the MST, emphasizes that the struggle is for sovereignty and a dignified life. "This coup government has come to take our rights and does not want the rural and urban population to wake up to fight in defense of these. Then we must remain strong and organize ourselves as a working class of the countryside and the city.

In addition to demanding Out with Temer, the movements also advocate a political reform with effective popular participation and are contrary to the proposal of the so-called Distritão, under analysis in the National Congress.

Bruno Pilon, of the Small Farmers Movement, commented that this is another way for the government to maintain the system of exclusion perpetuated for more than 500 years, whose rural population has always been a central actor in the process of exclusion.
"Historically, peasants are experiencing a process of brutal, violent exploitation and exclusion that drives us out of our land, forbidding us to produce and market our food. So we are here to say that peasants, despite the exclusion of capitalism, remain strong, firm in a process of permanent struggle," Pilon said.

The concentration for the march began at 8:30 am, in front of the National Museum, with the presence of local artists and a cultural program.
Then the walk followed by the Esplanade of the Ministries, until the National Congress, in the opposite direction of the official military parade.

Build the Cry of the Excluded in the DF: Caritas, Pastoral of the Migrant, Pastoral of the Child, Pastoral of the Youth, Faith and Politics Movement, CNBB Justice and Peace Commission, Brazil Popular Front, , MST, MPA, Movement of Peasant Women, Via Campesina, CUT, CTB, Sinpro-DF, World March of Women, FNDC, Popular Youth Lift, Movement of Workers and Rights Workers - MTD, MTST, Sindsasc, among others.