A Coup to Steal All Natural Resources 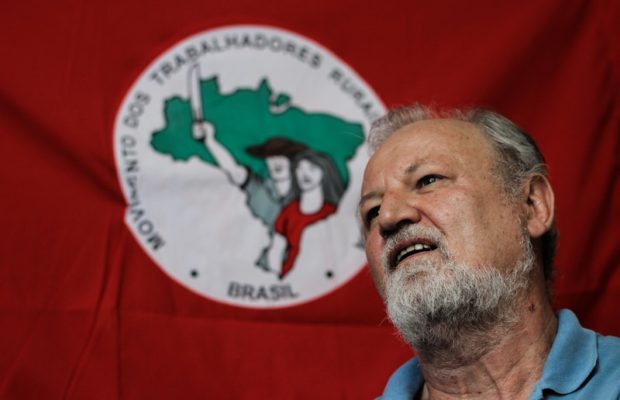 Interview with Joao Pedro Stedile, leader of the MST, on the political crisis in Brazil.

After the penultimate vote of the Senate on the impeachment against President Dilma Rousseff, we interviewed Joao Pedro Stedile, historical leader of the Landless Workers’ Movement (MST), who is at the frontline of the fight against “putschist leader Michel Temer”.

The impeachment against President Rousseff is going through its final stage and protests are multiplying. What is the strategy of the MST?

The MST now participates in two struggle fronts. One one hand, we are a part of the Popular Brazil Front, which is made up of over 60 movements, to articulate a wide popular alliance of the left that can oppose the institutional coup and can organize the protests. The other front is the one linked to the MST and it’s related to the Agrarian Reform. We are organizing mobilizations in the rural areas, against the Coup. Regardless of the voting against Dilma, on August 29, there will definitely be an intensified struggle in the rural areas, where we will increase the amount of mobilizations and land grabbings. There’s a project bill that the coupist government seeks to apply with the help of the right-wing parliamentarians, which hasn’t be approved yet, and which seeks to liberalize the selling of lands to foreign capital. It’s an insult. Rural movements have warned that, should the bill become a law, each portion of land that is sold to foreign capital will be immediately occupied.

You have announced the possibility of a general strike. Are the conditions favorable for that scenario?

In such a serious moment of the class struggle in Brazil, in which the right has imposed a parliamentary coup and has expelled the President, we can only influence the correlation of forces and bring a wide participation of the working class. However, until now mostly the youth, women and the most politicized sectors of the working class have taken to the streets:  the militants, to sum up. And this makes it difficult to empower ourselves to stop the coup. In fact, the working class movement is finding many difficulties because 28 years have passed in the country since the last political strike. And the working class, which is very young, does not have that experience.

And the right? How much mobilization capacity does it have?

The strength of the right is not on the streets, nor on public squares. On the streets, it has been defeated. They claimed to be fighting against corruption but the cabinet of the coupist government, as former Minister Ciro Gomes has said, is a true thieves union. These days, the latest news is that the Minister of Foreign Relations, José Serra, received bribes from Petrobras, for the amount of 23 million reais via the Odebrecht company, in 2010. And Temer is involved. The right is more corrupt but its strength lies in the monopolistic power they have over press, TV, the judicial power, and most of the Congress. We hope that the senators have a little bit of consciousness and can stop the coup on the August 29 voting.

What role do the Olympic Games play for the Interim Government?

From a political perspective, the Olympic games have been a failure, because of the lack of legitimacy of the current administration: there was little presence of other Heads of State (those present, to Latin America, represent the right), there was a massive rejection towards Temer at the Opening Ceremony, where he was booed by the audience. I believe that the Presidents who came, have done it mostly because of their own interests, or to spend a few days of holidays in the luxury hotels of Copacabana.

You had anticipated that the reason behind the institutional coup was the privatization of Petrobras and its withdrawal from the great extraction zone of the Pre-Salt, and your prediction is currently being fulfilled. What would happen if Temer stayed in power?

The true aim of the Coup in Brazil was not Dilma, who has led a terrible second term, where she bowed to business leaders. The problem is that in the deep crisis we are experiencing as a peripheric economy, we depend on international capitalism. And capitalists have a need to completely control the situation to impose a neoliberal plan. The neoliberal project is the only way they know to protect their interests and save only themselves. The plan foresees the application of classical capitalist measures in times of crisis, meaning: to raise exploitation of work by raising unemployment, decreasing salary, increasing working hours, and eliminating rights, cutting the expenditure on public resources destined to health, education and agrarian reform and instead put them at the service of the private accumulation of capital, privatizing natural resources (which our country is so rich with) to reap an extraordinary benefit that can help them get out of the crisis, that’s why they are taking the oil in the pre-salt area, the mines, the water, biodiversity and, as I was saying before, they also want the lands: to privatize the last active state companies such as the power, transportation, ports and airports sectors. That’s the plan they are carrying out.

Is the crisis that the progressive forces are going through in Latin America also the crisis of the alliances that the socialist presidents of the XXI century have built “from the top down”?

The problem in Latin America is deeper: it isn’t a matter of parties nor of governments. After the 2000-2015 period there has been a permanent dispute in the continent between three development models:the Neoliberalism promoted by the US, the neo-developmentalism of Brazil, Argentina, Uruguay and the model of the Bolivarian Republic of Venezuela, and the seven countries that joined it. But, in the last three years, all three projects have entered a crisis. To be honest, all of the continent is immersed in this crisis. And there is no proposition to exit this situation because the very own bourgeoisie is in crisis and is seeking to increase the exploitation of the working class, as I explained before. And neither the peoples nor the working class have a clear proposal for a new project. That’s why the crisis will continue for some time, until the popular forces of each country can build an hegemonic project that can take our countries out of this situation.

How is this related to the difficult situation Venezuela is going through in the Mercosur?

Even before this conflict Mercosur was not a project for the future. It was always a commercial agreement, where the companies installed in the five member countries seeked to take advantage of the tax exemptions. The ideal situation for the Mercosur would be to quickly transform into an economic agreement of the UNASUR: precisely to increase the relationships of economic and political integration of South America. The problem is that the failure of the Mercosur is happening in the worst possible way: in an international crisis and with the right dominating Argentina, Paraguay and Brazil, which now intends to exclude Venezuela. But Uruguayans are behaving properly, blocking any setbacks for Venezuela. Anyway, I repeat, the solution is not in the Mercosur, but a wider agreement that can be issued in the orbit of the UNASUR. With this, we will be able to solve important problems for each country and confront the Pacific Agreement of the US. But first, in order to expand the UNASUR in this direction, we should stop the coup in Brazil and overcome the crisis in Venezuela. And on this matter, we are quite behind.