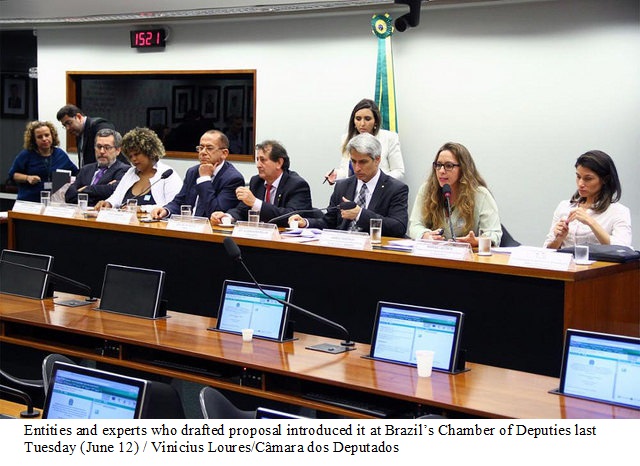 Brazil is the world’s top agrochemical consuming country, according to a 2015 dossier published by the Brazilian Association of Collective Health (Associação Brasileira de Saúde Coletiva – ABRASCO). The report found that 7.3 liters (1.9 gallons) of poison are ingested every year by every Brazilian. In an effort to challenge this reality, organized civil society entities in the country introduced the National Policy for Reducing Agrochemical Use (Política Nacional de Redução dos Agrotóxicos – PNARA), at the country’s Chamber of Deputies last Tuesday (12), a people's initiative for Bill 6670/16.

The key goal of the PNARA is to gradually reduce the use of chemicals in food production in Brazil, which is traditionally associated with monoculture and large estates owned by big farmers and transnational food companies. To counter this model, Marina Lacôrte, an agriculture and food specialist at Greenpeace, argues that the bill proposes that the Brazilian State starts to promote agroecological farming systems through tax benefits.

Lacôrte points out that changes in investment flows aim to boost the production of healthier food and to help develop agroecology in the country.

“If we turn all our efforts from the conventional model to agroecology, it will also improve productivity and technological innovation, and this is exactly what we need: to support farmers to make this transition,” she adds.

Endorsed by health, environmental, consumer rights, and human rights organizations, Bill 6670/16 was put forward by civil society entities and has been pending in the Chamber of Deputies for over a year. Now a special committee will discuss the matter this month.

WWF Brasil public policy officer Bruno Taitson points out that, essentially, the PNARA brings forward a paradigm shift in agricultural practices adopted in the country. “We want to promote organic farming, agroforestry, and other options that can give society an alternative to food products that are produced with agrochemicals,” he says.

Experts heard at the Chamber of Deputies last Tuesday said that, in addition to harming the environment and the collective health, agrochemicals also pose a social problem.

An example, according to activist Franciléia Paula, is that pesticides directly impact rural communities, such as landless workers, quilombolas (residents of quilombos, settlements set up in Brazil’s rural areas, mostly by escaped enslaved people of African descent), and indigenous people. “We have been getting reports of agrochemicals being used as a genocide weapon, especially against indigenous populations. And these are the very people who have production systems that preserve nature,” he says.

As agrochemicals are connected with a culture of large estates and monoculture, the organizations that are advocating for the bill will have to face the extremely influential rural caucus, which is currently trying to pass the so-called “poison package,” a set of measures to encourage the use of pesticides in the country.

Congressman Nilto Tatto, who reported Bill 6670/16, argues that society will have to keep mobilizing efforts to push the bill.

“We have to keep the debate going here [in Congress], holding public forums with institutions and social movements, in a project to mobilize society more and more,” he said.

The committee that will deal with the bill now should start holding meetings next Tuesday (June 19, 2018).