Campaign of struggles: The MST donates more than 100 tons of food throughout Brazil

Monday, April 26, 2021
Food Sovereignty and Sustainability
MST Occupations and Demonstrations
Oppression of MST and Social Movements
Info Source:
From the MST Page | Translated by Friends of the MST (US) | Original URL: https://mst.org.br/2021/04/27/jornadas-de-lutas-mst-hasteou-sua-bandeira-em-centenas-de-atos-pelos-brasil/

The actions took place between the 10th and the 21st, during the National Campaign of Struggles in defense of Agrarian Reform in April, in memory of the 25th anniversary of the Eldorado dos Carajás Massacre 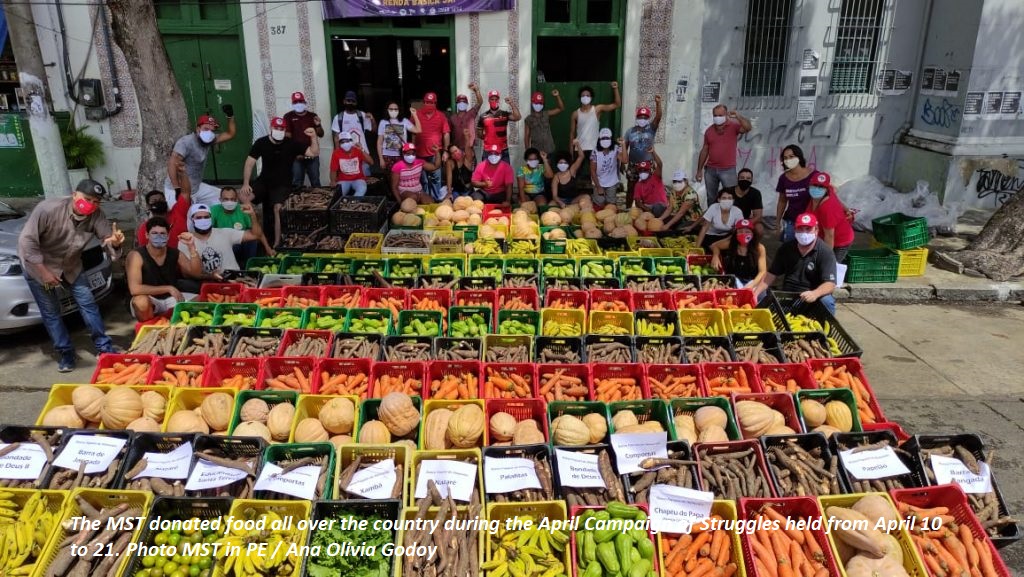 The MST is in solidarity and shares its harvest among the workers affected by the food crisis that the country is suffering, in the situation where more than half of the Brazilian population is not guaranteed that they will have food on the table.

It is estimated that there are almost 117 million suffering from food insecurity and 19 million facing severe hunger. This is what the data from the National Survey on Food Insecurity indicates in the context of the COVID-19 pandemic in Brazil - ascertained at the end of last year, by the Brazilian Network for Research in Sovereignty and Food and Nutrition Security (Penssan Network).

In this sense, and in the face of hunger - only during the first year of the pandemic, in 2020 - the MST has already donated more than 4 thousand tons of food and 700 thousand lunch boxes to families of workers and workers in a situation of social vulnerability.

Summary of solidarity actions for the April Campaign of Struggles

Even suffering from the paralysis of the Brazilian People’s Agrarian Reform and the current government's lack of management so that family farming continues to exist and produce healthy food. 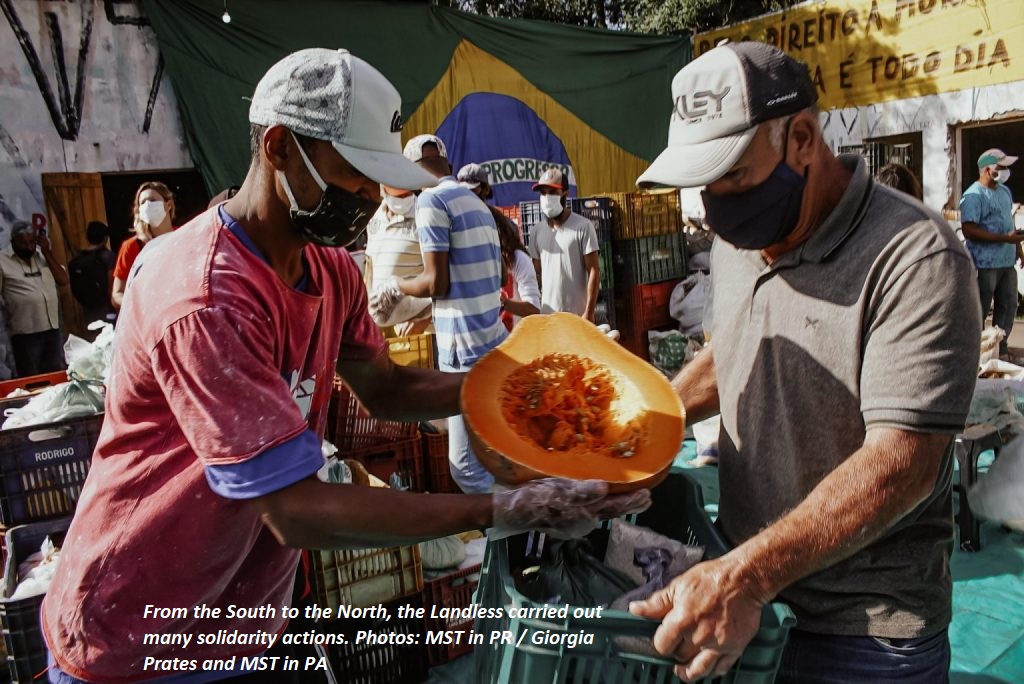 In a partial assessment of the solidarity actions of the April Campaign of Struggles - which will be updated throughout this month - the MST as a whole has already exceeded 100 tons of donated food and more than 16 thousand lunch boxes to poor communities across the country. The solidarity actions were carried out between April 10 and April 21, during the National Campaign of Struggles in defense of Agrarian Reform in April, in memory of the 25th anniversary of the Eldorado dos Carajás Massacre.

In donations from People’s Movement Health Agents, the families served received kits, totaling 1,500 protective masks for Covid-19. And it met in a national plenary session with other social movements that are members of the Brazil Popular Front and the Periphery Alive Against Coronavirus campaign to build collective solutions for the pandemic situation.

During the campaign, the MST, together with 30 Brazilian and international civil society groups, also signed the manifesto “We can't wait: we need to breathe!” that blames the federal government for the shortage of intubation kits and requires the production of oxygen by Brazilian companies in view of the shortage of such items in the ICUs in Brazil. 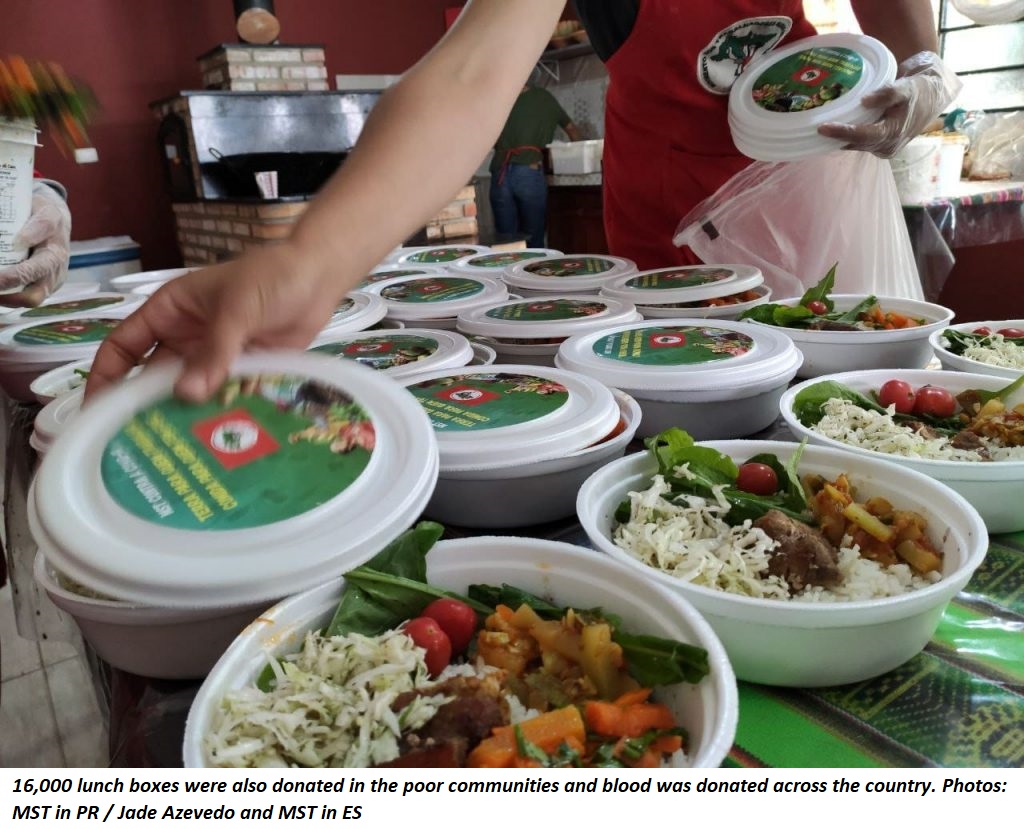 In addition to the actions noted above, in some states Landless activists mobilized blood donation drives, volunteer work in the recovery of degraded areas and voluntary actions directed to hospitals.

In an historical denunciation, the MST continues to insist that social inequality, which is very high in Brazil, is structured in land concentration. And during the campaign, with banners, blockades and symbolic actions, while activists were on the move, we demanded justice for the martyrs and marked the 25 years of impunity of the Eldorado do Carajás Massacre.
And denouncing the current injustices, during the campaign there were also protests for the return of emergency aid of R $ 600 for the working class, vaccinations for the entire population, defense of the Unified Health System and Bolsonaro Must Go.
In the absence of a federal pandemic control pact, and with the end of the April Campaign of Struggles in defense of Agrarian Reform, the MST calls on the population and all its activists to the “Stoppage for Life”, encouraging measures of care and productive isolation, following a policy of coping with crises aggravated by Covid-19 and mismanagement.

In addition to emergency measures that emerged with the worsening of the food and health crises, which led the MST to work with brigades and solidarity campaigns across the country. With Brazil back on the map of hunger and helplessness in the family farming sector, the landless workers, together with the opposition to the Bolsonaro government and society as a whole, demand incentives for the National Program for Strengthening Family Farming ( Pronaf). And it urgently demands the resumption of the Bill of Law (PL) 823/21, in help and restoration of emergency aid for the rural working class, so that there are conditions to continue planting food and supplying the table of the Brazilian people.

In 2020, in addition to the Federal Government denying support for rural workers through vetoes of the Assis de Carvalho Law, it stopped using more than half of the resources, of R $ 500 million destined for the Food Acquisition Program (PAA). And considering in the same year, another R $ 80 billion were no longer invested to contain the Covid-19 pandemic.

This lack of funding in public administration, unfortunately directly reflects the worsening of hunger and the loss of lives in the country that add up to almost 400 thousand deaths from the coronavirus alone. Dramatic indicators that compromise Bolsonaro and his government in the Parliamentary Commission’s Investigation of Covid in Brazil.

Check out more images from the solidarity actions during the April Campaign of Struggles.