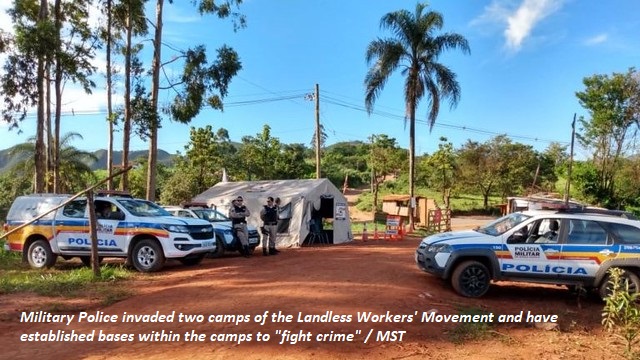 Members of the Landless Rural Workers’ Movement (MST) denounced an operation that began  December 17, when the Military Police established bases inside of two of their camps. The people that live in Patria Livre camp and the Zequinha camp, located in São Joaquim de Bicas in the Metropolitan Region of Belo Horizonte, of Minas Gerais state have reported that they are experiencing a situation of duress and terror.

The entrance of the Military Police (PM) began at 1:00 PM on Tuesday (December 17), the day in which the children of the Elizabeth Teixeira school, located within the camp, were participating in their graduation ceremony. According to the statement by the movement, police attempted to interrogate some of the parents on the day of the commemoration, without presenting their warrant to enter the area. The PM entered with riot police, tracking dogs and a helicopter.

The stories affirm that police harassed those living at the camp with degrading comments. When a bus with members of the MST arrived, the police forced them to walk one by one between two lines of police. The women, who were the majority, stated that the police made comments such as “there are people here that are not landless, that one is a hot thing” and “look at how beautiful these women are. I could hit that.”

The agriculturalist Alessandra Andrade, that has lived in the Zequinha camp for the last year and a half, says that she is upset with the attitude of the PM. “The police are acting as if there were criminals here inside. Here there are no criminals, there are workers, honest people with hands full of calluses exactly like mine, because of how much they have worked and fought for the land,” she said. During the night watch, Alessandra reported that the police were “harassing and looking at women’s bodies.”

What the police said

The lieutenant-colonel Itabirano who is responsible for the operation, alleged that the motive for the entrance of the PM was to carry-out “visible policing” to avoid crimes. “Just as we police in the neighborhoods,” he added. He said that the action is not related to the reinstatement of the ownership, which can only be done through a judicial order, but said that the PM would remain “until its necessary.”

Mirinha Muniz, a member of the state board of the MST, disagrees with the alleged motives of the Police. “They say that they will be there to guarantee the security of the families, that there are claims that are criminals there, but they have not pointed out who there criminals are, they have not presented a work plan. On the contrary, they have been filming the families the whole time and the people feel extremely violated,” she criticized.

Mirinha reported that the police established a base inside the camp. “This is not a place that allows the violent entrance of the police. The people want the immediate withdrawal of the PM from within the camp, since the families do not feel safe in their presence,” she claimed. “In addition to being sexually harassed, the people feel morally disrespected,” she added.

On January 21, an inspection by Judge Walter Zwicker Esbaille Jr. E is planned. On January 23, there is a legal settlement hearing, in the Lafayette Forum, about the negotiation between the former property owner and the camped families. The MST affirmed that this is the only legal process corresponding to the area.

On December 18, an inter-religious act took place in solidarity with the landless families.

According to the MST, the Patria Livre Camp and the Zequinha Camp are home to around 1,200 families. Both areas are property of the businessman Eike Batista, currently imprisoned on charges of active corruption and money laundering, and were abandoned when the occupation took place. In a statement, the MST pointed out that the land suffered from constant environmental violations.

In 2018, the members of the movement built and inaugurated a school within the camp, with classes of primary school, middle school, Youth and Adult Education, and literacy. The Elizabeth Teixeira School was reformed in 2019 and now it has brick walls.

Another thing to highlight about the camps in São Joaquim de Bicas is that they were affected by the breaking of the Vale dam in Brumadinho in January 2019. The two camps were coated with mud by the Paraopeba River and now they have enormous difficulties with regards to agricultural production.