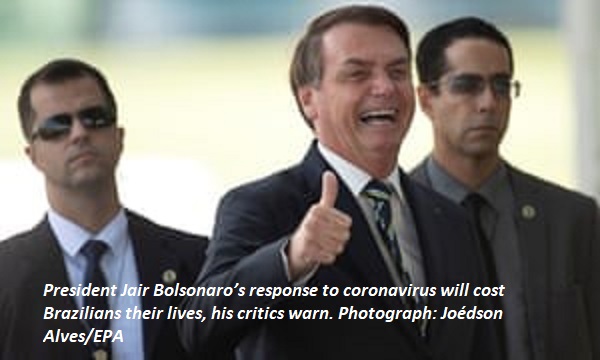 Some of the most distinguished members of the Brazilian left have demanded Jair Bolsonaro’s resignation in a biting declaration that criticised what they called his cynical and criminally irresponsible handling of the coronavirus crisis.

Brazil’s far-right president has enraged large sections of society in recent days by downplaying the virus and willfully undermining efforts to slow its advance with shutdowns and quarantines.

On Sunday, Bolsonaro ignored his own health minister’s call for physical distancing and hit the streets of Brazil’s capital, declaring: “We’ll all die one day.” 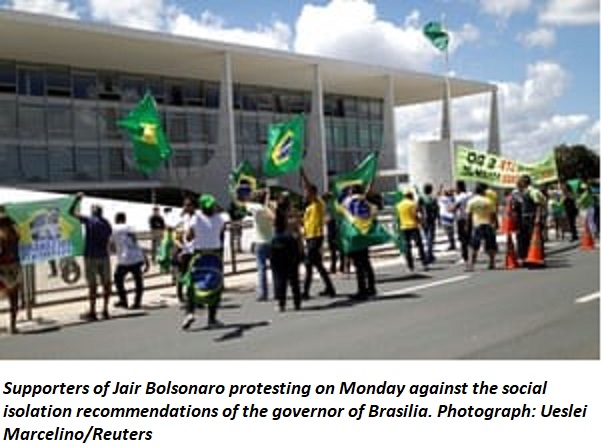 In a manifesto published on Monday morning, some of Bolsonaro’s most prominent political opponents said lives would be lost because of such behavior.

“This will cost Brazil a tremendous number of lives”

“Brazil and the world are facing an emergency unprecedented in modern history … [and] in our country the emergency is exacerbated by an irresponsible president. Jair Bolsonaro is the greatest obstacle to urgent decisions being taken to reduce the spread of the infection [and] save lives,” said the document, first published in the Folha de São Paulo newspaper.

They added: “Bolsonaro is in no position to keep governing Brazil … He commits crimes … lies and fosters chaos, taking advantage of the despair of our most vulnerable citizens.

“We need unity and understanding to face up to the pandemic, not a president who goes against public health authorities and puts his authoritarian political interests above the lives of everyone else.

“Bolsonaro is more than a political problem – he has become a public health problem … He should resign,” they concluded.

“He needs to be urgently contained and must answer for the crimes he is committing against our people.”

The declaration, Brazil Cannot Be Destroyed By Bolsonaro, was signed by leading voices from across the Brazilian left including Ciro Gomes, Flávio Dino, Manuela d’Ávila, Fernando Haddad and Guilherme Boulos.

“I believe he must answer for crimes against humanity at the International Court of Justice in the Hague – and I will work towards this,” Gomes told the Guardian.

Asked what his message to Bolsonaro was, Gomes said: “Resign, you reckless man.”

Boulos said the irresponsible, erratic and backwards behaviour of Bolsonaro – who one Brazilian commentator this week nicknamed “Captain Corona” – meant he had to go.

“More than a political crisis, Bolsonaro now represents a public health problem,” Boulos told the Guardian. “We see no way for Bolsonaro to continue governing the country – this will cost Brazil a tremendous number of human lives.”

Boulos claimed Bolsonaro’s undermining of quarantine and social distancing measures was partly the result of his being beholden to business owners who opposed a shutdown because it meant they would lose money.

“He represents the most perverse economic interests that couldn’t care less about people’s lives. They’re worried about maintaining their profitability,” Boulos said.

Bolsonaro has rejected criticism of his response, which he claims is designed to protect workers and the economy. “We’re going to tackle the virus but tackle it like fucking men – not like kids,” Brazil’s president declared on Sunday.

Haddad, who lost to Bolsonaro in the second round of the 2018 election, said the pronouncement showed Brazilian progressives were uniting against the president’s threat. “Enough insanity,” he tweeted.