The court says local indigenous people have not been properly consulted. Officials point out that the builders of the dam will be able to appeal against the decision. Once completed, the 11,000-megawatt dam, in Brazil's Para state, would be the third largest hydro-electric dam in the world. Belo Monte would only be smaller than the Three Gorges in China, and Itaipu which is jointly run by Brazil and Paraguay. The project, which has been heavily criticised by environmentalists, was approved by the Brazilian Congress in 2005. It is expected to flood a vast area of tropical forest.

The government says the dam would make Brazil more self-sufficient in energy, especially in the Amazon region, which relies on fossil fuels for much of its needs. Opponents of Belo Monte say that the dam will also displace thousands of indigenous people along the Xingu river. The court says local communities should have had the right to voice their opinion on the environmental impact of the project before the Congress vote. "A study on the environmental impact of the project was required before, not after, work on the dam started. The legislation is flawed," Judge Souza Prudente told O Globo newspaper.

The building consortium in charge of Belo Monte, Norte Energy, faces a daily fine of $250,000 (£160,000) if it carries on with the work. The Brazilian authorities say they plan to invest more than $1bn (£640,000) to assist the communities who will be forced to move to make way for the dam. 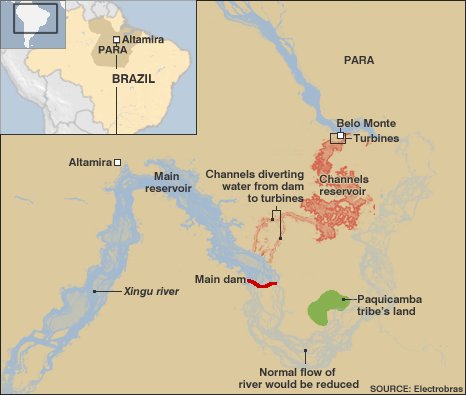