Brazil prepares for a fierce second round presidential election

Following the first round of the presidential election, the campaigns, especially that of right-wing candidate Jair Bolsonaro, have focused on personal attacks and allegations 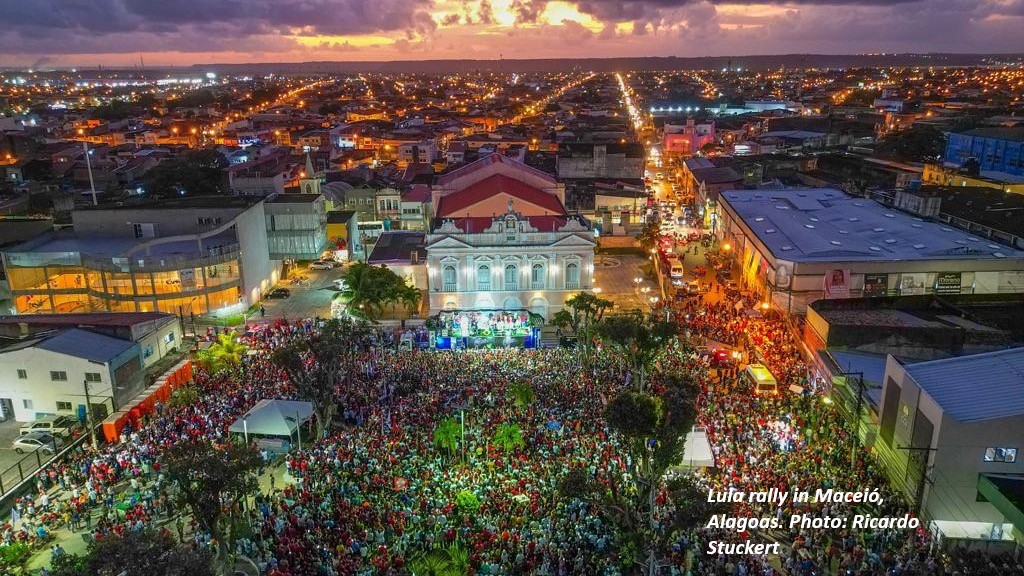 As presidential candidates Lula da Silva and Jair Bolsonaro prepare for the Brazilian run-off election on October 30, tensions are high across the country. Campaigning has heated up and the already existing polarization of society is deepening. While campaigning for the first round focused mainly on programs and promises, the run-up to the second round has already seen both campaigns going on the offensive.

With just over two weeks left until the historic run-off elections, we take a look at the major areas of dispute and debate.

The dispute over the truth

The 2018 Brazilian elections made history due to the extent to which deliberately crafted, sensationalist and spurious facts aka “fake news” were spread by groups associated with the Bolsonaro campaign. The intensity and speed at which such fake news was spread via Whatsapp and social media platforms was a key factor in his victory. In 2018, some of the fake news favorites were claims of the electronic voting system being unreliable and fraudulent, supposed corruption and criminality in the Workers’ Party (PT), its ‘links’ to illegal elements, how the PT candidate Fernando Haddad apparently planned to force homosexuality on children, and the absurd allegation that when he was Minister of Education, he distributed “gay kits” in primary schools. Messages with these claims reached thousands of WhatsApp groups in the weeks leading up to the elections.

The lies that were spread in the 2018 elections have since been debunked and the mechanisms used for this operation have been studied as a permanent global threat to democracy in the digital age.

In these elections, especially following the first round, the barrage of fake news has returned in an attempt to influence voters, especially the 21% who abstained in the first round. Articles and videos are being circulated about Lula’s so-called plan to close down churches, of his being pro-abortion, promoting youth drug consumption, attacking the ‘Brazilian family,’ and being a Satan worshipper. Social media platforms have become constant battlegrounds in a tug of war as campaigns push these messages and debunk them.

One of the most common lines of attack against Lula is the claim that he is a convicted criminal and thief, and committed acts of corruption. These claims cite as evidence the fact that he spent 580 days in prison. They conveniently omit the fact that Lula has been cleared of all charges and convictions as it was ruled that former judge and former member of Bolsonaro’s government, Sergio Moro, had clear political motivations for these convictions.

The ‘criminality’ of Lula is extended to accuse him of being involved in organized crime and drug trafficking. Most recently, an audio recording of an alleged conversation between two leaders of the PCC (Primeiro Comando da Capital, one the largest gangs in Brazil) stating that Lula is a better president for organized crime was published on Bolsonaro’s social media platforms. In July, when similar fake news about the relationship between the PT and the PCC was circulated, the party published a declaration stating that there was no connection between the two entities and highlighted that Bolsonaro’s broadening access to gun ownership helps get the group access to more arms.

In the first round of elections on October 2, the region which showed the highest level of support for the PT candidate was the Northeast. Lula won the region composed of the States of Alagoas, Bahia, Ceará, Maranhão, Paraíba, Pernambuco, Piauí, and Rio Grande do Norte, by 66.7% compared to Bolsonaro’s 27%. In the State of Piauí, Lula won an overwhelming 74.3% of the votes. The region has been a historic stronghold of the PT and specifically of Lula, due to the impact of his social and economic policies that sought to reverse the historical oppression and exclusion of the region. The Northeast is majority Black, and was the focal point of agricultural production during the period of slavery in Brazil, which has lasting legacies today as seen in its economic underdevelopment and the institutional racism.

Bolsonaro’s racist and anti-poor policies and words have been rejected overwhelmingly by the people of the Northeast since his presidential campaign in 2018.

Following the first round this year, Bolsonaro has organized a series of campaign activities there in an attempt to win some votes, but above all, he and his supporters have made racist and classist comments criticizing the voters there.

During a meeting with 200 allied parliamentarians on October 6 at the president’s official residence, Palácio da Alvorada, Bolsonaro said, “Lula won in the 9 out of 10 States with the highest rates of illiteracy. Do you know which states these are? In our Northeast, and it is not just the high rate of illiteracy that is the most concerning in these States. Other economic indicators are also low in the region, because these States of the Northeast have been administered by the PT for 20 years.”

On social media, comments made by Bolsonaro’s base were even more hateful and prejudiced.

The devastating economic crisis in Brazil is impossible to ignore. The campaign in support of Lula has consistently focused on how the Brazilian economy has crumbled in the period following the impeachment of Dilma due to neoliberal economic policies adopted by Michel Temer and current president and candidate Jair Bolsonaro. The promise that Lula will not only create social programs for the most vulnerable to end poverty and hunger, but also will strengthen the GDP and the value of the currency, the real, is a cornerstone of his campaign.

Due to the palpable economic deterioration, Bolsonaro has also been forced to respond with a counter attack. Much of this response has been focused on spreading the same disinformation that Lula and the PT are thieves and corrupt criminals and today’s economic crisis is a result of them.

However, Bolsonaro has also strategically distributed economic aid for low-income families through his Auxilio Brasil program to coincide with the election season and has even increased the amount they receive. It is worth noting that programs such as Bolsa Familia and other economic aid programs created under the PT governments that gave substantially more aid to families were cut.

On social media, Bolsonaro and his allies claim credit every time the price of meat or gasoline drops.

Voter intention polls in Brazil were harshly criticized after the first round results turned out to be significantly different from what many of them had predicted. Most polls on average predicted that Lula would receive around 46-48%, which he did, but the majority indicated that Bolsonaro would not receive more than 35% of votes whereas he received 43%.

That being said, they continue to play a key role in campaign strategies and primary targets. The Atlas Intel poll released on October 13 predicts that Lula will receive 52.4% of the valid votes and Bolsonaro 47.6%, while in total votes, Lula has 51.1% and Bolsonaro 46.5%. The survey indicated that 2.4% of voters are still undecided or intend to cancel their vote or cast a blank ballot.

The Quaest poll, also published on October 13, shows Lula in the lead by eight points with 49% in total votes. When valid votes are taken into account, i.e., not counting whites, nulls and abstentions, Lula has 53% of the preference, against 47% for Bolsonaro. Quaest’s methodology for this poll attempted to take into account the possibility of abstention that was so prevalent in the first round at 21% and used the concept of “likely voter.”

The experience of the first round and the divergence from the voter intention polls means that both campaigns are not giving into complacency or resignation and frenetic election work will continue till October 30.

NOTE: There are several screen shots of Twitter feeds from Bolsonaro. These are examples of the campaign tactics of the Bolsonaro campaign and are in Portuguese. To view these videos, please go to the original posting in Peoples Dispatch: https://peoplesdispatch.org/2022/10/14/brazil-prepares-for-a-fierce-second-round-presidential-election/