Brazil: Artists and politicians defend agroecology and the agrarian reform in MST’s fair

The conference “Healthy Food: A Right for Everyone”, which took place this Saturday May 6, 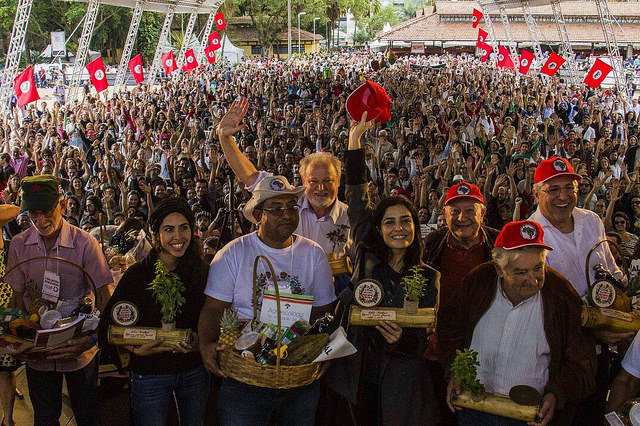 At the conference opening, Stedile highlighted the importance of the MST and of the activity for food sovereignty at the country. The rural movement is the biggest producer of organic rice in Latin America, with more than 600 thousand bags produced annually. “The agrarian reform and the support to the farmer population are fundamental for the policies of food sovereignty,” the leader pointed out.

Bela Gil talked about the importance that familiar agriculture has for the food base of the country. According to information produced by the extinct Agrarian Development Ministry (which Michel Temer wiped out), in 2015, familiar agriculture was responsible for 70% of the food consumed in the entire country. Although, due to the extensive presence of the agribusiness and the use of poison in production, the presenter argued that Brazil still has a lot to do.

For the activist, the alternatives to agribusiness are: the protection of land, family agriculture as the unit of production and the reduction of ultra-processed products. And, to avoid multinational companies and reduce the amount of agrotoxics in food, Gil supports the creation of a fee on the purchase and use of these poisons.

On the same line, the former Health Minister Alexandre Padilha defended an alliance between public health and family agriculture. Currently, the central issue of the right to food is protecting the local culture and diversity. Among the 10 countries that have the lower obesity rates, we see less consumption of processed foods, analyzed the former minister. “Meaning that, where food affects less on people’s health, is in those countries with diversified food, traditional dishes and where people do not fall in the fantasies of the fast food and ultra processed products,” said the former minister.

Actress Leticia Sabatella expressed herself in favor of the empowerment of little farmers. “These initiatives that remind us that we are a community and put us in harmony with sustainability, are necessary,” she said.

Former Uruguayan president Pepe Mujica also participated in the conference. Mujica stated that the ecological crisis is product of a political and cultural crisis. “A civilization based on profit produces a consumer that works permanently; there is no time for caring or loving”, he said. At the event Mujica praised the MST: “They fight for a fair cause at a feudal country”. Before his conference, the politician had participated in a collective interview of independent media..

The National Fair of the Agrarian Reform ended this Sunday, May 7, 2017, at Sao Paulo