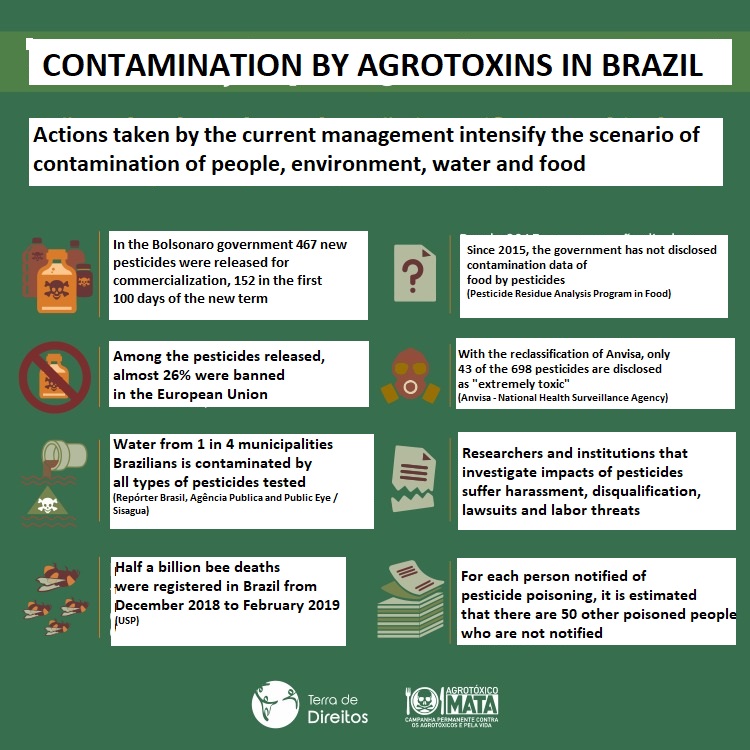 The judicial review by the Federal Supreme Court (STF) of the Direct Action of Unconstitutionality (ADI) 5553 that questions the tax exemption of pesticides has been postponed. At the beginning of the session on Wednesday (February 19), the President of the STF, Dias Toffoli, informed that the session would be shorter due to the participation of the ministers of the Court in the installation of Minister Cristina Peduzzi for the presidency of the Superior Labor Court (TST ).

There is still no new date for the Court to analyze the lawsuit on the tax exemption of pesticides. Minister Toffoli also affirmed that the processes will be accommodated in the agenda and the parties will be notified. 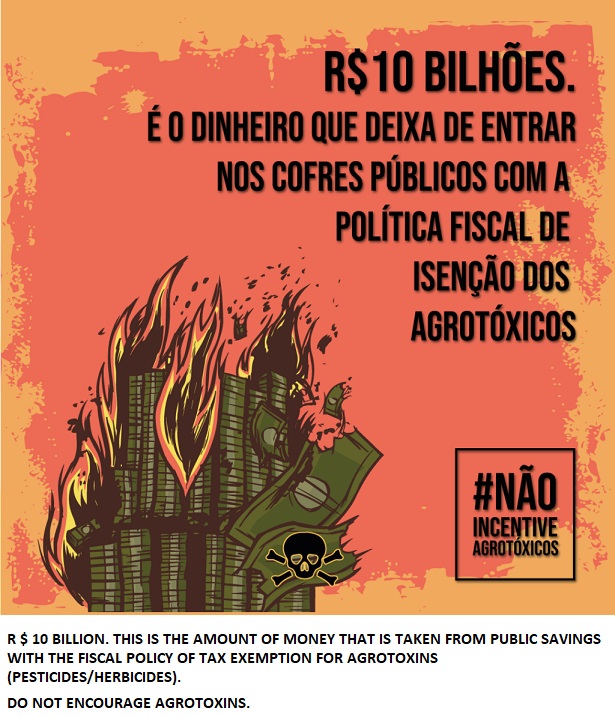 The Action is brought by the Socialism and Freedom Party (PSOL), in 2016. At ADI, the party questions the clauses 1 and 3 of Agreement No. 100/97 of the National Council for Farm Policy (Confaz) and Decree 7.660 / 2011. These devices grant tax benefits to the pesticide market, with a 60% reduction in the calculation basis for the Tax on Circulation of Goods and Services (ICMS), in addition to the total exemption from the Tax on Industrialized Products (IPI) of certain types of pesticides.

In order to collaborate in the technical and legal arguments about the social and economic impacts of the tax exemption, civil society organizations and networks operating in different areas of human rights participate in the trial of the action, under the condition of Amici Curiae (Friend of the Court).

We understand the need to put pressure on the Supreme Court, because we know that transnational corporations are very strong, but with social mobilization combined with scientific studies it is possible to have a victory

This Wednesday (February 19), the STF (Supreme Federal Court) judges ADI 5.553 / DF (Direct Action of Unconstitutionality), which seeks to overturn the unconstitutionality of the tax exemption for pesticides. The trial is scheduled for 2 pm.

The lawsuit is filed by PSOL (Partido Socialismo e Liberdade) and questions two legal provisions that grant tax benefits to poisons: Decree No. 7,660 / 11 and Convention 100/97 of Confaz (National Council for Farm Policy).

The first standard guarantees exemption from IPI (Tax on Industrialized Products) for some pesticides. The second, reduces the ICMS (Tax on Circulation of Goods and Services) calculation basis by 60% on interstate exits of pesticides, in addition to allowing states to reduce the ICMS calculation base, which applies to products up to 60% in internal operations.

While the Brazilian government favors agribusiness, it fails to collect billions of reais per year with tax exemption for pesticides, it also guarantees direct credit subsidies or infrastructure and research policies for the sector.

To better understand this ADI and the importance of the STF in declaring the unconstitutionality of the tax benefits granted to pesticides, the national director of the MST, Luiz Zarref presents some important elements in the following interview.

What is behind the tax benefits for pesticide companies? How does this demonstrate the direct relationship between agribusiness and the state?

We can say that Brazilian agribusiness is only sustained because it has historically been supported by the Brazilian State, with strong investments in the research sector. Brazil has the largest public company in the world for agricultural research, almost exclusively focused on developing technology for agribusiness. We have a program, which goes from government to government, of high investments in logistics for exclusive distribution of agribusiness and mining products, which even creates an advantage for agribusiness over industrialized products, because these logistics channels are geared towards ports in agribusiness production regions.

The Kandir Law itself (complementary law No. 87/1996) completely exempts agribusiness products from taxes. This means that of everything exported by agribusiness, nothing, absolutely nothing, is collected by the State. And this is a law that benefits the export of products without any industrialization, because it is precisely for products without industrialization. And now it is clear what we have already denounced, which is also the exemption of pesticides. This is part of an agribusiness support package, in which the Brazilian people pay for a false ‘high agribusiness productivity’, which is actually not viable. It is a model that takes money from the people, takes money from the State and delivers it to large companies in the entire agribusiness production chain.

What we are seeing is a collusion of companies with the State, benefiting their products from this tax exemption, which are values ​​four times higher than the budget of the Ministry of the Environment, for example, and double the value that the entire public health system (SUS - Sistema Único de Saúde) uses it to treat cancer. This is all done by FIOCRUZ, which supports part of this complaint. FIOCRUZ data show that for every dollar spent on pesticides, $ 1.28 is spent on acute poisoning treatment in the state of Paraná, for example. For us to have the dimension of the high impact that pesticides have on public health and, consequently, on the public budget.

In his first year in office, Jair Bolsonaro authorized the record release of 503 pesticide registrations, through the Ministry of Agriculture portfolio, under the command of the minister with close links with agribusiness. How does this affect the life of the worker?

What we see with the Bolsonaro government is that, in reality, this agribusiness that we are talking about, which has broad support from the State and which claims to be modern, in reality, has in its DNA the same backward characteristics of the latifundium that produces it, which, on the one hand, practices deforestation, burning, violence in the countryside, land grabbing, the legalization of land grabbing, and, on the other hand, has created a real war against nature and against the health of human beings. They make massive use of war products, highly dangerous products that will, precisely, strengthen this process of deforestation, burning and land grabbing.

When we see the government releasing all of these pesticides, including several of them banned in several countries around the world, we are seeing this role of the State once again strengthening the death industry. And the consequences for workers are numerous. In the case of the field worker, it is important to understand that along with this release there were changes in the way of identifying pesticides, changes implemented by ANVISA (National Health Surveillance Agency) and the Ministry of Agriculture, which recategorize the pesticides, removing the definition of high toxicological risk for low toxicological risk, a series of indications and illustrations that these products are at risk of death are also excluded.

This increases the rate of acute poisoning in field workers and the poisoning of crops and springs by these new pesticides. For city workers, it is a poisoning of both food and water - they are new pesticides that go to the worker's table, in a country where we are already the largest consumer of pesticides in the world. Studies carried out in 2019 showed that the population

This increases the rate of acute poisoning in field workers and the poisoning of crops and springs by these new pesticides. For city workers, it is a poisoning of both food and water - they are new pesticides that go to the worker's table, in a country where we are already the largest consumer of pesticides in the world. Studies carried out in 2019 showed that the population consumed, in some Brazilian capitals, a cocktail of up to 27 active ingredients of pesticides.

With the release of new pesticides, what is happening is the expansion of the poisoning of nature and the Brazilian people.

Do you consider ADI 553 a necessary action? Why?

The direct action of unconstitutionality is an important measure that is added to a series of other actions, and that has involved popular training on the use of pesticides, studies together with ABRASCO (Brazilian Association of Public Health), with several researchers across the country, for science to explain the consequences of pesticides for our country. They are mobilizations and also a series of laws that are being created through popular pressure in municipalities and states that face part of these benefits that agribusiness and especially pesticides have. It is important to mention the law that removes part of the tax exemption for pesticides in Santa Catarina, the law in Ceará that prohibits aerial spraying. These are laws that meet, with popular pressure, this role that the State should have to take care of the interests of the people and not of the interests of transnational companies. ADI 5553 adds to the questioning of this performance by the State.

What do the movements and entities that defend ADI 5553 claim?

Civil society movements and entities are mobilizing in the technical and legal arguments about the social and economic impacts of this tax exemption. The organizations are participating in the trial of the lawsuit as amicus curiae (friend of the court).

In all, four requests - individual and collective - for participation in society were admitted by the Court: authored by the Public Defender of the State of São Paulo, the Brazilian Institute for Consumer Protection (Idec), the Human Rights organization Terra de Direitos, Campaign Permanent Against Pesticides and For Life, Brazilian Association of Public Health (Abrasco), Brazilian Association of Agroecology (ABA) and Fian-Brasil.

On the other hand, there is the defense of maintaining the exemption, defended by the Association of Soy and Corn Producers (Aprosoja), the National Union of the Industry of Products for Vegetable Defense (Sindiveg), Confederation of Agriculture and Livestock of Brazil (CNA), Federation the Rio Grande do Sul Rice Associations (Federarroz) and the São Paulo State Federation of Industries (Fiesp), also admitted in the process.

What are the challenges faced by peasant movements in the fight against pesticides today in Brazil?

We have two major challenges: the first is to understand more and more what is behind pesticides, both from the scientific point of view and from the point of view of the State, such as this issue of tax exemption. Denounce this process for the economic losses, for the power that the pesticide is linked, for the damages to the nature and the health of the working people.

The second challenge is to build a solution to pesticides, which is agroecology. We have data from the Brazilian peasant movement, which have given strong demonstrations that it is possible that agroecology is not just an alternative, but that it is the technological matrix for a popular project in the Brazilian countryside. But we need to advance more, in scale, in diversity, in the different regions of the country, in the production of healthy food, based on agroecology for the Brazilian people. Of course, this also depends on the action of the State, but this State that is there refuses to dialogue with the peasants, refuses to recognize the peasantry as the subject of food production. As long as we do not change this governmental situation and increase pressure on the State, we need to consolidate the agroecology project in practice in our territories. 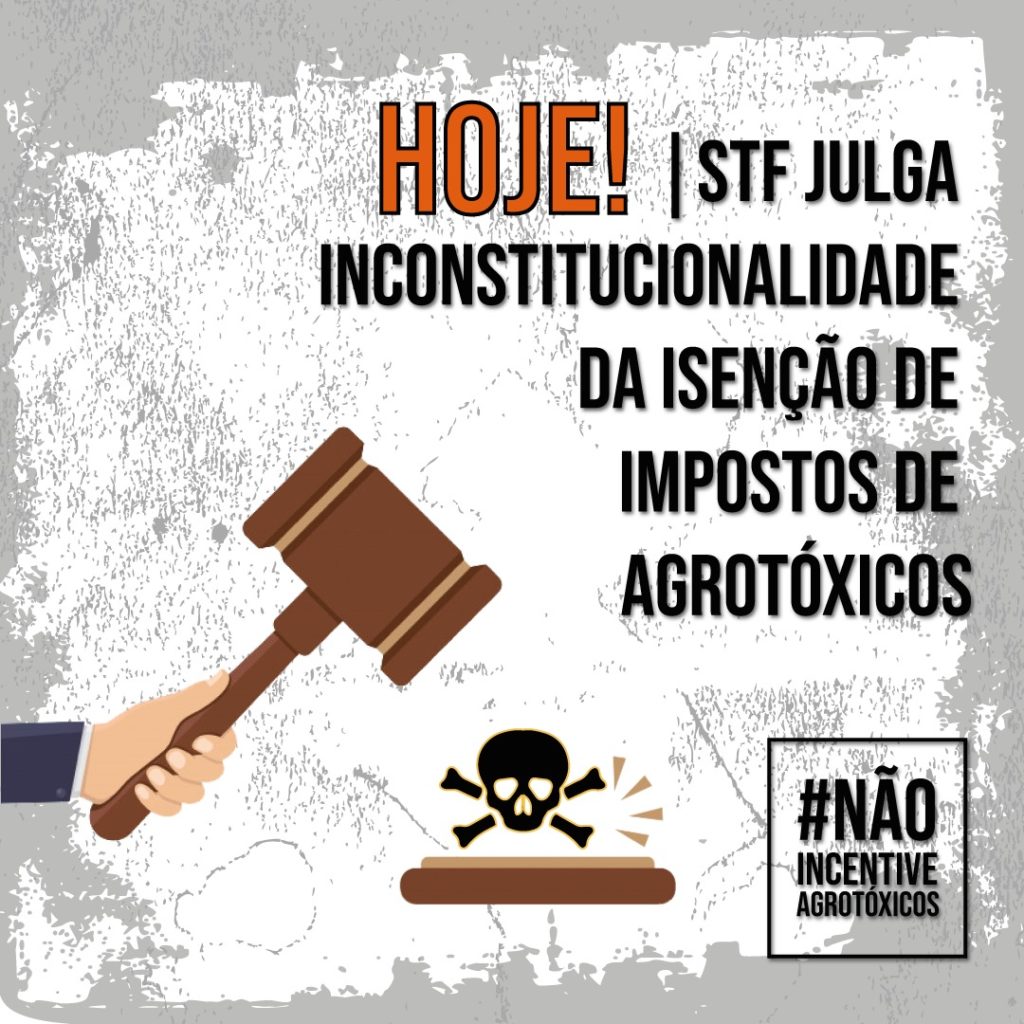