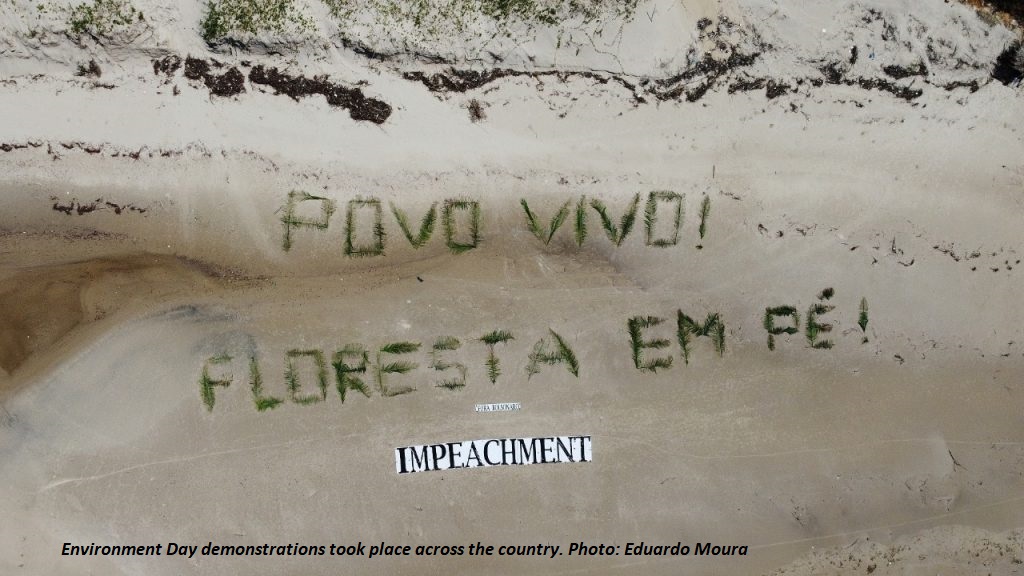 In a year in which deforestation in the Amazon and the release of pesticides are the highest in the last ten years, there was not much to celebrate on Environment Day, last Saturday (June 5). However, several popular movements and associations incorporate data to denounce Bolsonaro government policies against the Brazilian people and the environment and raise the flag with the motto: “Povo Vivo! Standing Forest! Out Bolsonaro! ”.

Articulated by the Anti-imperialist Journey for the Environment, the MST and some popular movements carried out actions in various regions of the country to draw attention to peasant agriculture, indigenous peoples, quilombolas, peoples and traditional communities.

Currently, the peoples of the countryside, waters and forests are part of the barricades in defense of human life and nature. Whether in defense of territories, or sharing native seedlings and healthy foods, traditional peoples protect and promote the diversity of lives in the different biomes of Brazil and are responsible for preserving around 30% of Brazilian biodiversity.

In an exclusive interview, Katia Penha, national coordinator of the National Coordination for the Coordination of Rural Black Quilombola Communities (CONAQ), commented on the importance of the Journey and how, four days before the day of the environment, the president of the Palmares Cultural Foundation revoked the Normative Instruction that guaranteed environmental protection around the territories of quilombos in the country.

When analyzing Bolsonaro's policy of environmental destruction, Katia pointed out that the peoples of the countryside, waters and forests have nothing to celebrate because the environmental devastation promoted by that government threatens these populations. In this sense, according to her, the quilombola groups do not have to celebrate in relation to the environment, but believe that it is essential to continue in the fight for the recovery of city areas, because every quilombo defends the environment and every quilombo must be protected”, points out Katia.

But the rights violations committed today do not stop there. Mining and hydroelectric corporations, as well as large fires, have been promoted by large estates and agribusiness, they are part of the actions and policies of the federal government in taking advantage of the pandemic to “pass the cattle.” Thus, a Brazilian death-politics promoted by the Bolsonaro government is also associated with deforestation and common resources through illegal mining and the expansion of large estates.

Faced with these challenges, the actions sought to dialogue with Brazilian and international society, but always complying with the standards of the World Health Organization (WHO) to contain the Coronavirus pandemic. In addition to the demonstrations in the Federal District and in some capitals, the Anti-Imperialist Journey for the Environment includes decentralized activities in territories from the north to the south of the country, such as planting trees, donating seedlings and food baskets.

Check out some of these actions:

The Samora Machel Brigade carried out mobilizations around the International Environment Day in the African continent, in Zambia and in South Africa. 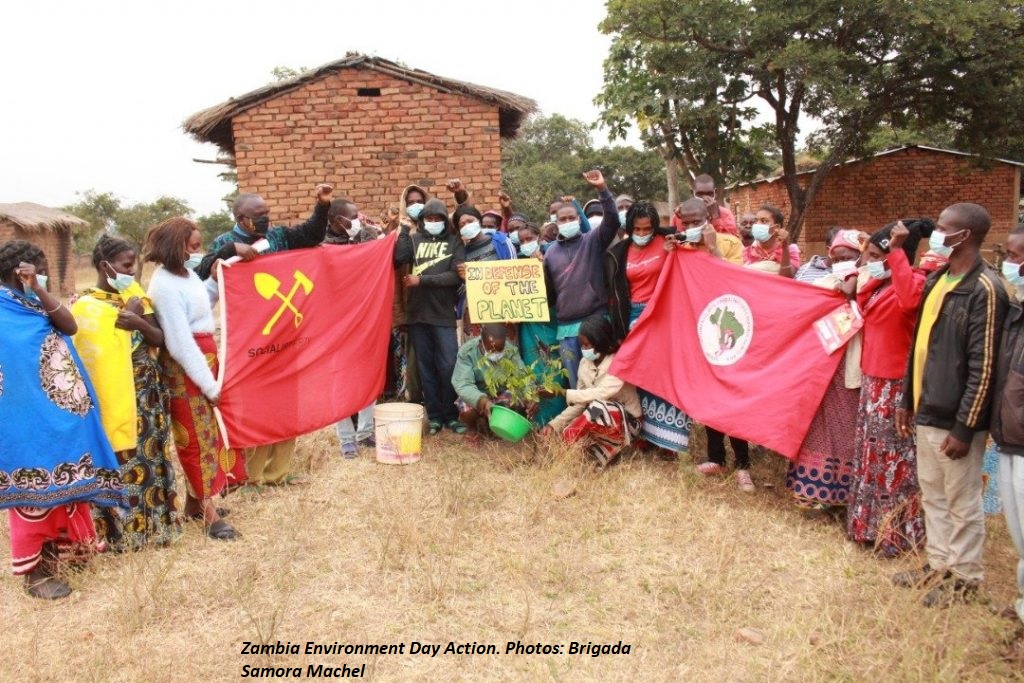 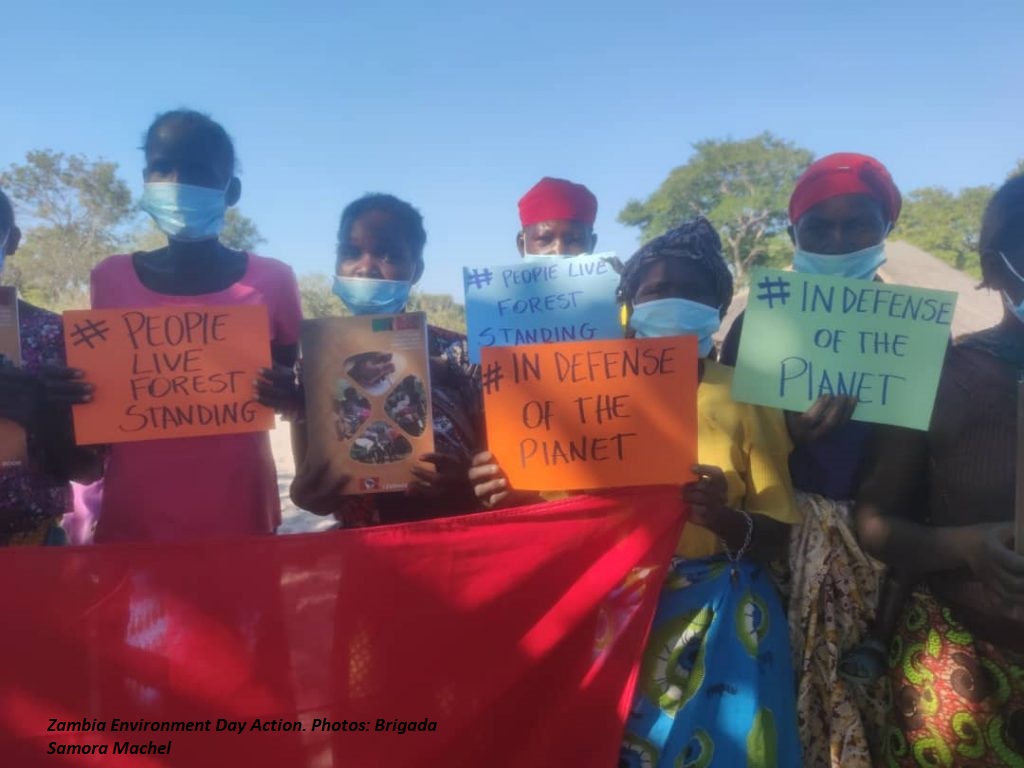 Landless families from the Contestado settlement, in Lapa (PR), organize the planting of 3,000 tree seedlings in the protection area of ​​the waterfall and artesian well. 300 native tree seedlings were planted on the banks of Córrego Clarito, in Cascavel (PR), where the murder of Valmir Mota (Keno) was also remembered. Also in Cascavel, representatives of political parties, unions and social movements ended the World Environment Day actions with an ecological walk for contemplation and photographic recording of native species in an area of ​​approximately 280 acres of Atlantic Forest, protected by the Sem families. Land of the Peasant Resistance Camp, for over two decades.

In Santa Catarina, the Landless families of the Filhos do Contestado settlement, in São Cristóvão do Sul (SC), planted 200 trees in the Solidarity Forest.

In Rio Grande do Sul, in the Environment, the youth of the Frente Brasil Popular de Candiota carried out a symbolic activity of denunciation, in front of the Eletrobrás Thermoelectric Plant in the municipality, against the privatization of the public company.

In Maceió (AL), 100 fruit seedlings from the Agrarian Reform areas of the Zona da Mata de Alagoas are planted in the Muvuca community by residents of the region and representatives of the MST, MTD and MMC. In the municipality of Atalaia, in Zona da Mata, the MST donated around 1,000 seedlings to commemorate Environment Day. In Taquarana (AL), the Youth Collective of the 1º de Outubro encampment carried out a task force to clean the creek in the community. In Piranhas (AL), around 100 tree seedlings were planted on the banks of the São Francisco River. In the Sertão de Alagoas, the MST placed lanes on the bridge between Alagoas and Sergipe, on the banks of the São Francisco River.

In Caruaru (PE) the planting of Pau Brasil and Baobá was carried out in the Santa Rosa neighborhood, in the UFPE/CAA forest. And at the Marielle Franco and Antônio Cândido Camps, located in the city of Goiana, the Sem Terra planted more than 500 trees.

In the Terra Cabana and Chico Mendes camps, in Benevides (PA), a symbolic act denounced the Bolsonaro government's policy of devastating the Amazon.

In Rondônia, the youth of the movements of Via Campesina (MAB, MPA, MST) and Levante Popular da Juventude carried out symbolic acts in Porto Velho, in front of the IBAMA Superintendence in the state, denouncing the dismantling of the MMA and environmental policies by the Bolsonaro government and in front of the CPA (headquarters of the state government) denouncing the recent approval of the reduction of two protected areas in the state. Mobilizations in defense of the Environment also continued with banners and the planting of trees, in the municipalities of Jaru and Ariquemes. And act of denunciation in the Rio Jaru and Rio Jamary, one of the main tributaries of the Rio Madeira.

In Maranhão, the MST and Via Campesina, in partnership with other movements, carry out an action in Quilombo da Mamuna, in Alcântara. In Imperatriz, the MST marked the date with an act in front of IBAMA to denounce the destruction of the Amazon. In the capital São Luís, the buildings of IBAMA, REFESSA and Ministry of Economy (decentralized unit) received the projections asking for a jail for Salles, in defense of the Environment and against the handover of the Alcântara base!

In Brasília, social movements, unions and popular organizations mobilized in a symbolic act on the Esplanada dos Ministérios, in front of the Ministry of the Environment (MMA) and the National Congress. The act denounced the actions of environmental destruction promoted by the Bolsonaro Government and [environmental] Minister Salles, and announced the resistance actions of peasant agriculture, indigenous peoples, quilombolas and traditional communities. An action with crosses denounced the more than 470,000 deaths by Covid-19 in Brazil and banners denounced the environmental crimes committed by the Bolsonaro government. A tree mounted on the esplanade lawn with agro-ecological food and tree seedlings symbolized popular resistance to these attacks. In the Federal District, 1.5 tons of agroecological food from the Agrarian Reform settlements and encampments were donated and around 500 tree seedlings were planted in Agrarian Reform territories.

The Landless youth of the Mártires da Terra settlement in São Bento do Tocantins (TO) planted fruit tree seedlings in the settlement. In Goiânia, Goiás, the MST and ASIBAMA donated around 500 tree seedlings.

The MST in Pontal do Paranapanema (SP) delivered healthy food baskets in Rosana and Presidente Prudente. Children without Land from Agrovila Che Guevara, in Mirante do Paranapanema, planted trees and medicinal herbs in the surroundings State School

Santa Clara - the MST and Armazém do Campo also distributed seedlings in the city of São Paulo and seedlings were planted in the Comuna da Terra Irmã Alberta, an MST settlement.

Check out all the images on the MST’s website: